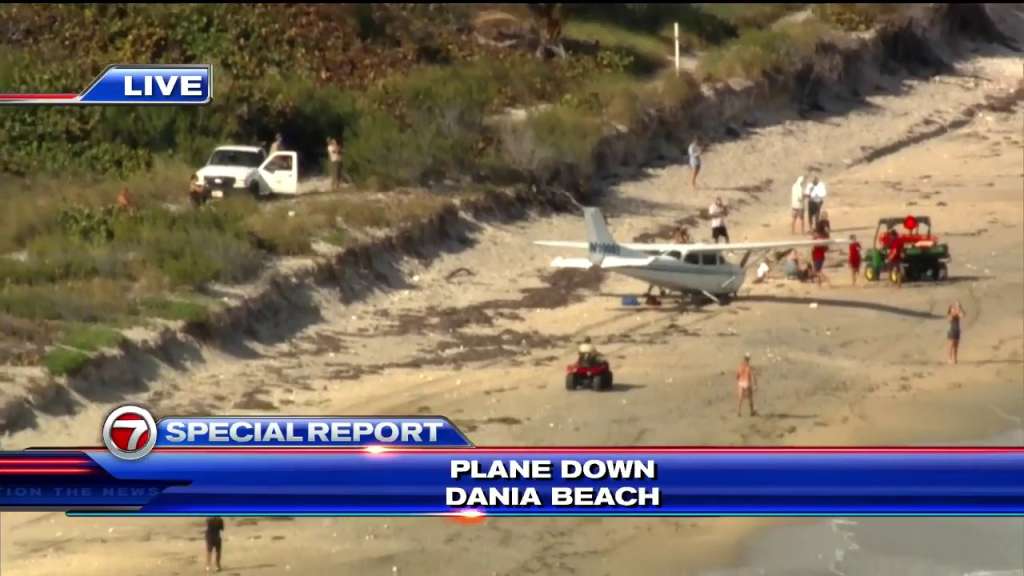 
DANIA BEACH, FLA. (WSVN) – The pilot of a small plane had to make an emergency landing on the shore of Dania Beach.

The Federal Aviation Administration identified the plane as a single-engine Cessna 172, and only the pilot was on board. FAA records showed the plane, which is owned by a Dania Beach marketing firm, took off from Fort Lauderdale-Hollywood International Airport at around 2 p.m. and was in the air for around 10 minutes.

The plane was supposed to head to the Bahamas before it experienced engine trouble and returned to South Florida.

Derek Thompson, who was visiting the beach, took video of the plane landing on the sand using his cellphone.

“I thought, ‘Oh, my God, is this guy actually going to land on the beach?’ He kept getting lower and lower, and as he was getting lower and lower, he was getting closer to where I was sitting,” he said. “He landed on the beach right in front of me, and I saw people down the beach, a few people, just run to get out of the way of the plane. The plane went up, and it’s nose kind of dug into the sand a bit when it finally came to a stop, and it came back down on its wheels.”

There were no reports of injuries, but a small fuel spill occurred during the emergency landing.

“I just heard a loud thump. I was asking, ‘Are you OK? Are you OK?’ And he was all evasive,” witness Hugo Kennedy said. “He got on the phone then, and he never got off the phone until now.”

“There were a lot of people running down to where the plane was,” Sophia Bernard, who works nearby, said.

“I did see him get out of the plane and walk away, so he was definitely OK,” Thompson said. “I was just happy that nobody was there that would have gotten injured.”

The National Transportation Safety Board will take over the investigation into the emergency landing.

Copyright 2020 Sunbeam Television Corp. All rights reserved. This material may not be published, broadcast, rewritten or redistributed.