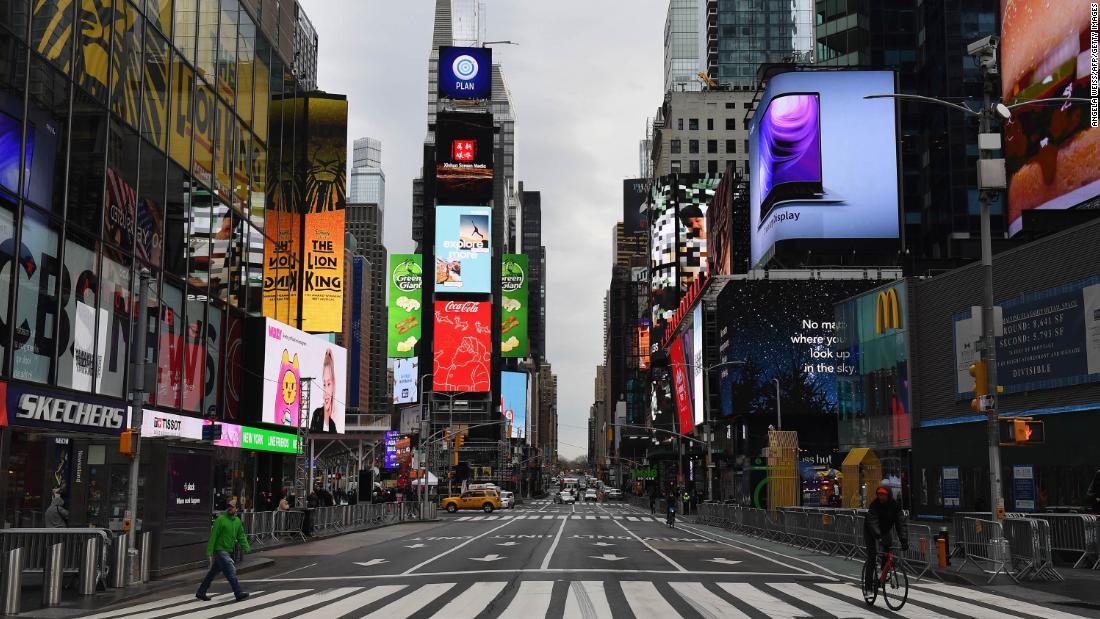 Commerce among the more than 1,500 businesses in the tourist destination and business district — centrally located between major public transportation hubs — has been decimated by the pandemic. However, business leaders still expect the area to make a full economic recovery once Covid-19 vaccines become widely distributed.
Times Square Alliance President Tim Tompkins says his nonprofit, which hosts events and promotes economic development in the neighborhood, considered canceling its New Year’s Eve ball drop ceremony this year in the face of surging Covid-19 cases, but ultimately decided it was important to continue the tradition, even if it’s closed to the public.

“We wanted to send a message that New York is still here. It’s not going away,” Tompkins told CNN Business.

Officials have differing opinions about how much change Times Square may be in for over the next few years — as new businesses inevitably replace old ones — and how long its full recovery will take. Real estate and tourism officials say estimates range between one and four years.

“2021 is certainly going to feel more upbeat than 2020 did, but I think there will also be some disappointment,” said Douglas Hercher, managing director at RobertDouglas, a private real estate investment bank. “If people are thinking Times Square, by the summer, is going to look like the Times Square we all know and love, that’s probably not going to be the case.”

As it stands, the district on and around Broadway between 40th and 53rd streets is mostly a collection of business sectors upended by the pandemic economy: brick-and-mortar retail stores, hotels, restaurants, theaters and office space. A Times Square Alliance study found foot traffic in the neighborhood’s busiest block on 42nd Street between Seventh and Eighth avenues was down 70% from the previous year.
The lack of visitors has coincided with the permanent closure of hotels like the Hilton Times Square, the Omni Berkshire, and the Roosevelt in addition to retail tenants like Gap. Other companies behind on rent have all but abandoned neighborhood stores, leading to a 13% year-over-year decline in retail rental prices during the fall, according to the Real Estate Board of New York, the city’s largest real estate trade association.

Tompkins says about 43% of Times Square’s street-level businesses are currently closed, down from 87% in the spring. Hercher estimates 25%-30% of retail rental spaces in Midtown have “gone dark” due to tenants shuttering indefinitely.

“That’s the state of affairs right now,” he told CNN Business on Wednesday. “You’re going to see those retailers reducing their footprint to bring their costs in line with their sales. … I think rental rates are going to have to come down tremendously to attract tenancy to those spaces.”

Hercher expects the downturn will worsen through February, making it extremely difficult for the most revenue-starved retailers to maintain their presence at the Crossroads of World. But Paimaan Lodhi, senior vice president of policy and planning for the Real Estate Board of New York, notes that Time Square’s rent rate reductions have also creating opportunities for new tenants.

“Rents for Times Square retail space haven’t been this low since 2012,” Lodhi told CNN Business on Wednesday. “This is an opportunity for other companies to lock in these rates.”

The company broke ground on the 46-story mixed-use facility at the corner of 47th and Broadway in northeast corner of Times Square back in March 2019. Once it’s completed, the location will be home to 75,000 square feet of new retail space, a 4,000-square-foot performance venue with an outdoor stage, a food and beverage terrace and a luxury hotel.

L&L managing director David Orowitz says the pandemic hasn’t shaken the developer’s faith in the $2.5 million project, which is still set to open at the end of 2022.

“I don’t doubt the destination location will return,” Orowitz said. “It may be at a lower price point. There will be different players, but the location itself, the nexus of human interaction and the positive benefit we as humans get from that, hasn’t been vanquished.”

Times Square’s appeal among office space tenants is also a point of contention. For years, companies like Ernst & Young, Reuters and Allianz have occupied skyscrapers overlooking the glitzy and vibrant theater district, which was frequented by nearly 380,000 pedestrians on a typical day prior to the pandemic.

But the normalizing of remote work options across business sectors this year has already led many companies to scale back on office space, which some analysts have predicted will be a permanent shift in the commercial real estate market.

Hercher said it’s an open question whether the change in demand for Times Square office space will drive down rent prices since most leases are set between five and 15 years.

“We’ve definitely seen in the residential market, rents have dropped 10-15% this year in Manhattan,” he said. “That’s probably a little bit of the canary in the coal mine.”

Times Square officials point to TikTok choosing the neighborhood as the site of its new US headquarters as a sign of strength in office space demand despite many of the city’s employers extending their work-from-home policies through the first half of 2021. Only 8% of Manhattan’s estimated 1 million office employees returned to their offices for work by mid-August, according to a survey conducted by the Partnership for New York City.

Lodhi, the Real Estate Board of New York SVP, acknowledged some older, less-desirable office buildings around Times Square may be converted in the near future.

“There’s talk about whether it makes sense to make those into residential usage,” he said. “The name of the game here in the Covid era is flexibility.”

Australia-China row: 'I'm Australian – why do I need to prove my loyalty?'