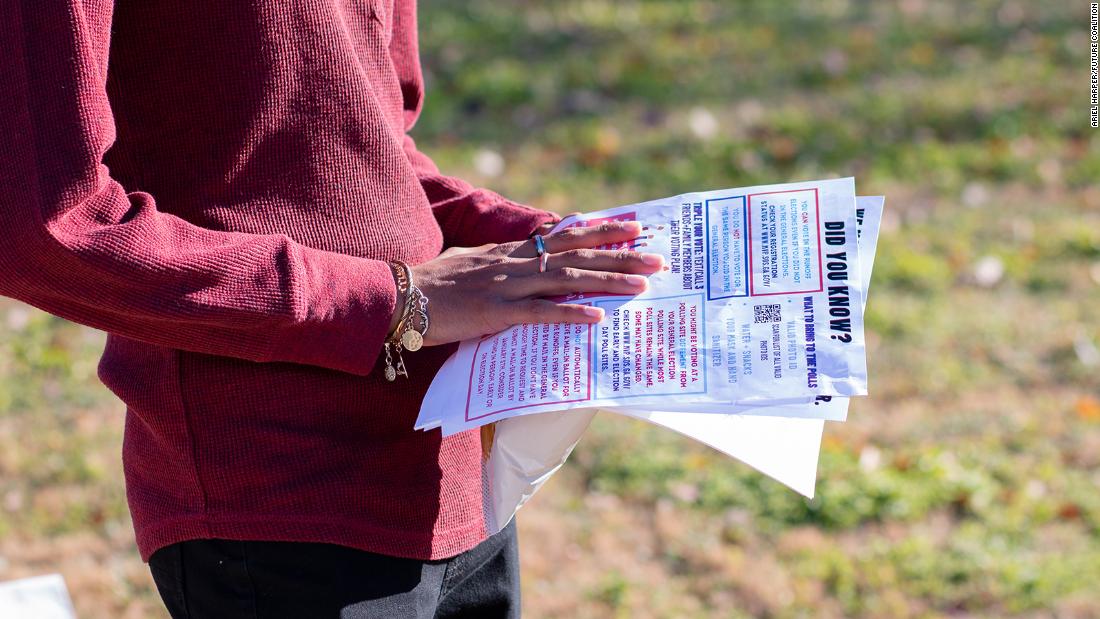 The recent political science graduate watched the general election results roll in from Los Angeles in November, captivated by how close the Georgia senatorial race turned out. The next day he got a text from Ricardo Mireles, the executive director of the charter school he attended as a teenager, asking if he wanted to come to Georgia to help turn out the vote.

A few days later, they were in the car driving to Georgia.

Some days they are handing out thousands of masks and information at poultry plants on how to vote and others they have spent from 7 a.m. to 7 p.m. at a local church asking people to register to vote.

Many say they are coming not to promote a candidate, but to take the enthusiasm that was ignited by the general election and build sustainable political power for people from different age groups, ethnicities and socioeconomic backgrounds.

The inclusion of more groups is something that has risen with a new generation turning 18 this year, but has been in progress for years, said Gilda Pedraza, executive director of the Latino Community Fund, a nonprofit that funds Latino organizations that promote political engagement, scholarships and economic opportunities.

“If you have been doing this work in Georgia for years you knew how the state was slowly changing,” Pedraza said.

After making the drive to the other side of the US, Mireles and Valenzuela found their own places to stay on couches or in hotels as they made their way through areas such as Dalton, Cedartown, Savannah and Atlanta.

They were joined later by another alumnus of Mireles’ school, Brian Hernandez. Spending weeks traveling around to tell Georgians when, where and how to vote, the men had to adapt their lives to fit into a new state.

Hernandez spent part of his time continuing to work his job remotely, newly graduated Graco Hernandez continued his job hunt from thousands of miles away and Mireles took a leave of absence.

Their focus was on encouraging Georgian Latinos to vote, feeling that as Latinos themselves they could best connect with that community, and because in many places, politicians aren’t using their resources to connect with those voters in meaningful ways, leaving a large gap in engagement, they said.

“Latino votes are taken for granted: ‘Oh, we know a majority vote this way, so we don’t need to canvas to them,'” Graco Hernandez said. “I think a lot of people feel hurt that their issues aren’t being taken into consideration.”

On top of that hurt, many voters — especially those newly registered — are fatigued from the November election or haven’t had the importance of the runoff election explained to them.

“‘We already voted on November 3, why do we have to vote again?'” Mireles remembers many saying. “It is a complex understanding of civics that can easily get lost especially when Covid is what really we should all be focusing on.”

The Latino population accounts for about 9.9% of Georgia’s population of nearly 11 million, according to the US Census. But with the race so tight, a few thousand votes could make a big difference, volunteers said.

“This is what happens we have a more inclusive democracy, a democracy that is more reflective of the tapestry of our community,” said Héctor Sánchez Barba, CEO of the nonprofit organization Mi Familia Vota. “We know that when we do the work the community turns out in historical numbers.”

Mi Familia had previously campaigned against President Donald Trump’s policies. But the groups and volunteers in Georgia for the runoffs said they were putting aside their own political ideologies for the goal of advancing Latino political power.

“We’re just there to register voters and get them out and make sure Latinos get to the polls and know how important this election is,” Brian Hernandez said.

It’s a priority that many people share, said Pedraza, who added that the LCF gets about 20 people a day contacting the organization asking to come to Georgia from another state and volunteer to help drive turnout in the runoff election.

LCF is not encouraging their travel out of concern for Covid-19 safety but is asking those volunteers to call and text information to Georgians, Pedraza said. She recognized that this election is important to Americans everywhere, not just the Georgians at the polls.

Eighteen-year-old Chloe Armstrong worried coming from New Hampshire that she would be an interloper in the efforts to encourage voting in the Georgia runoff.

“Initially coming in, I thought is this my place to be here? Am I taking up too much space and too much air? I wanted to make sure I was doing something that my experience could supplement rather than take over,” she said.

But after subletting an apartment with other roommates traveling for the election, she found herself well received from the local activists and organizations, said Armstrong, who has previously been active in Democratic Party campaigning in Nevada.

“There is a sense of, ‘Thank God people are finally paying attention because we have been working so hard,'” she said.

Armstrong is a youth organizer for 18by.vote, a nonpartisan organization that creates campaigns to support teenage voting. She is traveling to young Georgians’ doors to help them register to vote and learn how to get to the polls for the runoff election, and she is one of many young organizers working for the organization.

They text and call potential voters, share social media campaigns and travel around to encourage young voters to show up on Election Day. About half are local organizers, while the rest are coming from other states, Armstrong said.

Emily Guo, 19, has lived in Georgia her whole life and says she’s excited to see all the help come in from across the country as her state challenges political stereotypes and engages wider demographics of Americans.

“I think a lot of that is because of the groundwork young people and people of color have been laying for years and we are really starting to see the fruit of it,” she said.

Nurturing the growth of representation for people of diverse ages, races and backgrounds is what is pushing them to volunteer their time, said Nikhita Ragam, a Georgia Tech student who texted voters from her home in Texas over the school break.

“Even though I do hold my own political belief, the point is to have peoples’ voices represented. We want the people’s voice to be reflected in electoral politics,” she said.

And young voters everywhere have a stake in young voters showing up in the Georgia runoff, both in the policies that will come out of the Senate and in the reputation younger people have for not being very civically engaged, said Jazmin Kay, executive director of 18by.vote.

“Young people are frequently told they are the future, but the current decisions being made impact young people dramatically,” she said. “Maybe if young people were voting and putting pressure on elected officials they would (be) included.”

In just eight days, the 18by.vote organization has reached more than 276,000 people face to face and over text, Guo said. And the enthusiasm the organizers are feeling can be seen in the early voting.

As of Tuesday, with a week left until the runoff election, 2.9 million Georgians had already cast their vote.