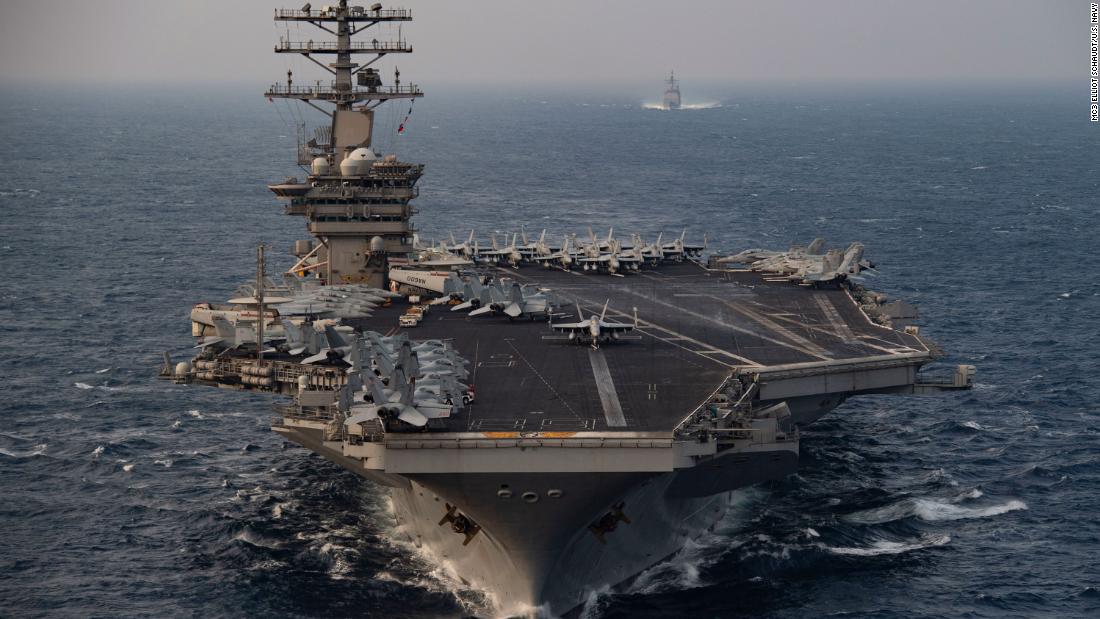 This decision overturned Miller’s order last week to send the USS Nimitz out of the region and home, in part, to send a de-escalation signal to Iran amid rising tensions between Washington and Tehran.

One defense official says Miller’s idea of de-escalation had not been adopted as a formal, approved policy. It took top commanders by surprise, several defense sources said. US Central Command wanted the carrier to stay in the region to deter Iran at a time of rising tension and less than three weeks before President-elect Joe Biden takes office.

US officials were particularly concerned that Iran or its proxies might stage some sort of attack to the one-year anniversary of the Trump administration’s January 3 assassination of Iran’s second most powerful leader, Gen. Qasem Soleimani, and the Iraqi Shia militia leader Abu Mahdi al-Muhandis in a drone strike.

Tehran’s carefully calibrated response came Monday, when Iran announced it has restarted enriching uranium to 20% levels seen before the international nuclear deal froze its nuclear program in exchange for sanctions relief. And a maritime security company said Iranian forces had detained a chemical tanker bearing the flag of close US ally South Korea.

Foreign diplomats and officials who watch Iran closely said that Iran is mindful that with Biden’s arrival in the White House, the US approach to Iran will change sharply. “I think that Iran knows in a few days the game starts again and if they do something stupid now it doesn’t help their position,” one diplomat told CNN.

Another said worries haven’t subsided though. “There’s nervousness around Iran globally because there’s always a possibility that someone will misstep and go too far, or someone will do something,” a European diplomat said. “There’s been a long catalogue of misunderstanding between Iran and the US, so they’re not always calibrated to understanding each other’s red lines well.”

The State Department said it was tracking reports that Iran had detained the South Korea-flagged tanker.

“The regime continues to threaten navigational rights and freedoms in the Persian Gulf as part of a clear attempt to extort the international community into relieving the pressure of sanctions,” a spokesperson said. “We join the Republic of Korea’s call for Iran to immediately release the tanker,” they said.

The White House and NSC did not immediately respond to CNN’s request for comment.

On Sunday, Miller announced that the aircraft carrier would remain in place due to purported Iranian threats “against President Trump and other US government officials.” Miller said in a statement that he had “ordered the USS Nimitz to halt its routine redeployment.” The carrier will now “remain on station in the US Central Command area of operations,” Miller added.

“No one should doubt the resolve of the United States of America,” he said.

US officials have been concerned that Iran or its proxies would mark the January 3 anniversary with some sort of attack. President Donald Trump had threatened that he would “hold Iran responsible” if any Americans were killed. Along with the change of course for the USS Nimitz, the US had also sent nuclear-capable bombers to the Mideast and publicized the presence of nuclear submarines around the Persian Gulf as a deterrent.

On Monday Iran’s Foreign Minister Javad Zarif said in a tweet that “we resumed 20% enrichment, as legislated by our Parliament. IAEA has been duly notified,” and added that, “Our measures are fully reversible upon FULL compliance by ALL.”

Trita Parsi, a vice president at the foreign policy think tank Quincy Institute, said he suspected that Iranian politics “compelled the government to respond to all of these threats that the Trump administration has made in the last couple of weeks in a way that would allow them to claim they have pushed back, but not do it in a way that would provide Trump with a pretext to attack, which would have been the case if something had happened in Iraq.”

Mark Dubowitz, chief executive of the Foundation for Defense of Democracies, described the move as “nuclear extortion, the nuclear blackmail that Iran has quite effectively engaged in over the years.”

Referring to the Iran nuclear deal’s formal name, the Joint Comprehensive Plan of Action, Dubowitz said, “They’re counting on Biden’s already stated objective of going back into the JCPOA and will not want a nuclear crisis his first few months in office.”

The European Union has said there will be consequences for Iran’s decision. One diplomat from a member country said they “do not appreciate at all” Iran’s move to increase enrichment but sees it as “all part of a negotiating process” with “the US and Iran sending signals to each other.”

This diplomat agreed that Iran’s move to increase enrichment and seize the South Korean-flagged tanker was carefully chosen. “What they don’t want to do is provoke too much of a reaction from the current administration, but they don’t mind poking a bit, here they are poking a stick at one of America’s closest allies,” the diplomat said.

r
an has been working for months for the release of $7 billion in oil payments that South Korea owes Tehran but has not released because of fear of US oil sanctions.

While Tehran responded to the January 3 anniversary carefully, Iran-affiliated leaders were explicit that they would not be attacking US interests. On Sunday, the leader of the Iran-backed Iraqi Shiite militia group Kataib Hezbollah issued a statement saying the group would not try to “enter” the US Embassy in Baghdad, which was attacked in the wake of Soleimani’s killing, or seek to overthrow the current Iraqi government, even as crowds gathered in Baghdad’s Tahrir square Sunday to demand that US forces leave the country.

“We will not enter the embassy of evil today, and we will not overthrow this government, as there is still time,” Abu Hussein Al-Hamidawi said in the statement. The US has previously accused Kataib Hezbollah of being behind attacks on US facilities.

Last week CNN reported there have been conflicting messages that reflect divisions within the Pentagon on the current threat level from Iran.