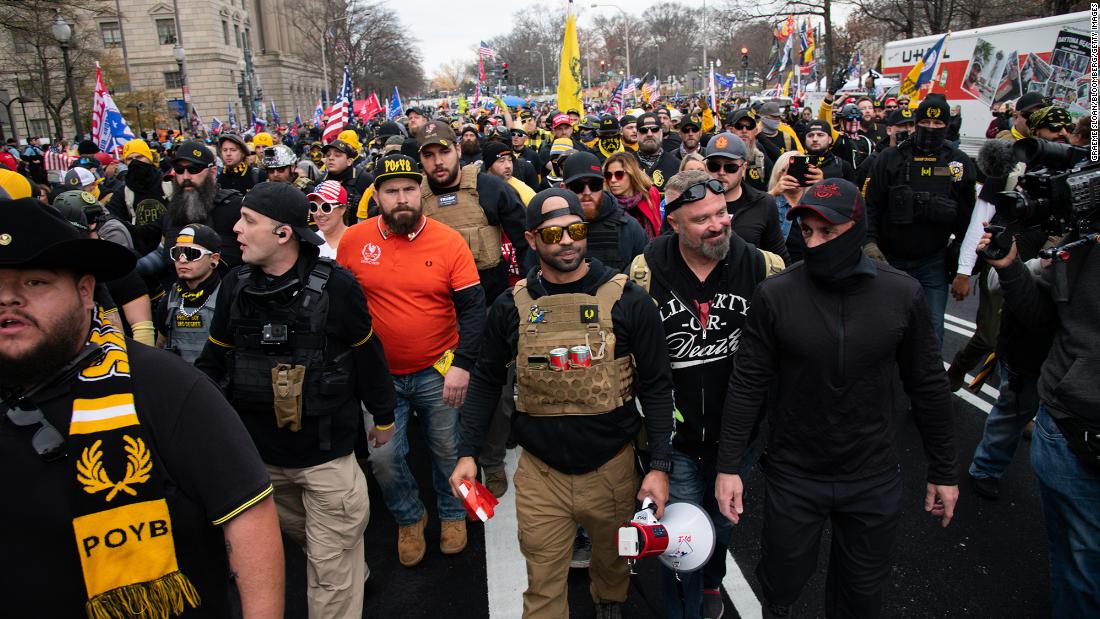 A law enforcement official told CNN that the DC Metropolitan Police Department charged Tarrio, of Miami, with destruction of property related to a banner that was burned on December 12 outside a church in northwest DC.

“He was charged with Destruction of Property related to an offense that occurred on Saturday, December 12, 2020 in the 900 block of 11th Street, Northwest,” Hickman said. “At the time of his arrest, he was found to be in possession of two high capacity firearm magazines. He was additionally charged with Possession of High Capacity Feeding Device.”

Tarrio did not return CNN’s calls or texts Monday. He took responsibility for the act last month, writing in a post on the social media website Parler that “against the wishes of my attorney I am here today to admit that I am the person responsible for the burning of this sign.” In the same post, Tarrio also dared the police to arrest him, writing: “Come get me if you feel like what I did was wrong. We’ll let the public decide.”

Tarrio also took responsibility during a “WarBoys” podcast interview last month, praising himself as “the person that went ahead and put the lighter to it and engulfed it in flames.”

CNN also attempted to reach Tarrio for comment in December after the incident.

The sign burning came during a protest in Washington that saw at least four people stabbed and at least 33 arrested. Large groups of protesters and counterprotesters had gathered earlier in the day outside the Supreme Court building and at Freedom Plaza to protest the presidential election results.

Videos circulating on social media showed scuffles and small fights had broken out sporadically, but the large gatherings were mostly peaceful.

Washington Mayor Muriel Bowser released a statement at the time calling for unity.

“This weekend, we saw forces of hate seeking to use destruction and intimidation to tear us apart. We will not let that happen, and continue to stand together strong and United to Love,” Bowser said.

A far-right collective, members of the Proud Boys have been seen — many dressed in black and yellow polo shirts — at multiple 2020 Trump campaign rallies.

Founded in 2016, the group ​lists among its central tenets a belief in “closed borders” and the aim of “reinstating a spirit of Western chauvinism.” ​In online statements, Proud Boys have claimed they have used violence only in self-defense. But members are often seen carrying firearms and bats and donning protective gear​, and some have been convicted of crimes against anti-fascist protesters. ​The group’s ideology has been labeled “misogynistic, Islamophobic, transphobic, and anti-immigration” by the Anti-Defamation League.

CNN’s Elle Reeve and Nicky Robertson contributed to this report.