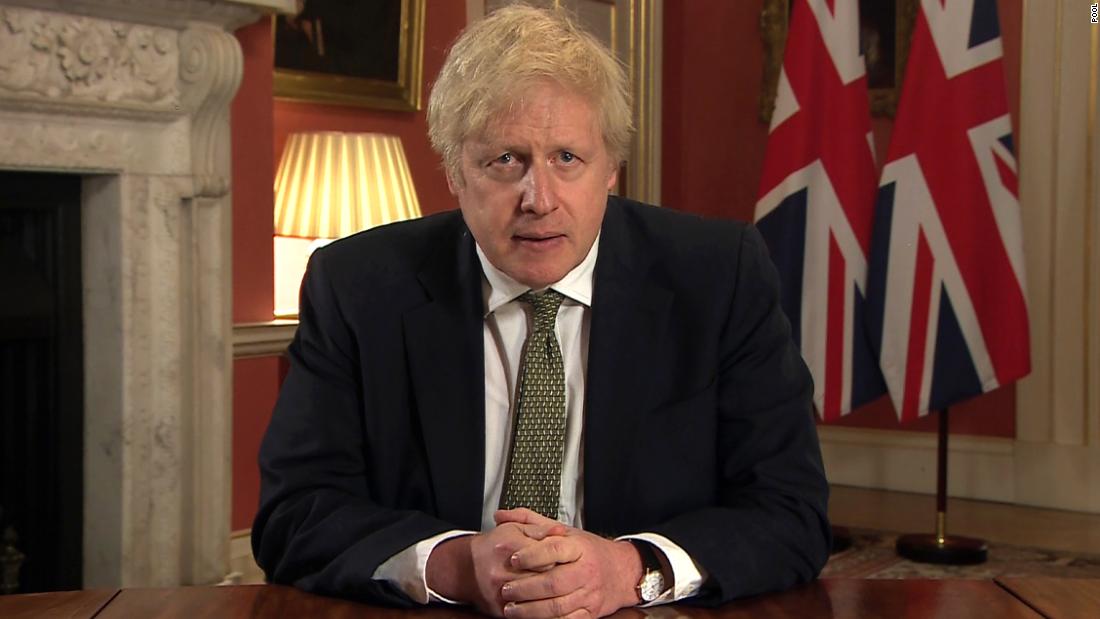 “It is clear that we need to do more to bring this new variant under control,” Johnson said. “That means the government is once again instructing you to stay at home.”

During his televised address to the nation, Johnson reimposed measures seen during the first lockdown last spring, including closures of secondary and primary schools to all except the children of key workers and vulnerable children. He added that this means it will not be “possible or fair for all exams to go ahead this summer as normal,” and alternative arrangements are being put in place.

People will be allowed to leave their homes for limited reasons like shopping for essentials, exercise, and medical assistance. Johnson also said people could still leave home “to escape domestic abuse” — an issue that arose earlier during the pandemic, as isolation and lockdown conditions exacerbated barriers to escape for victims of domestic violence.

International departures are now limited to those who have “a legally permitted reason,” such as work.

Outdoor sports venues will have to close. But unlike spring’s lockdown, nurseries will not be shuttered, elite sports can go ahead, and places of worship will remain open on the basis that attendees adhere to social distancing rules.

The lockdown is expected to remain in place at least through the middle of February.

His announcement follows that of Scotland’s First Minister Nicola Sturgeon, who announced a lockdown that will begin on midnight, Tuesday, local time. Wales and Northern Ireland — the other nations of the UK — are already in lockdown.

The UK is back in crisis mode as new daily Covid-19 cases soared above 50,000 cases for nearly a week, and hospitalizations exceed April’s peak.
According to Johnson, there were 30% more Covid-19 patients in hospitals in England on Monday than a week earlier. The health ministry has said the country would move to the highest Covid-19 alert level, reflecting concern that the rising number of hospitalizations could overwhelm country’s National Health Service (NHS) in coming weeks.

“Many parts of the health systems in the four nations are already under immense pressure. There are currently very high rates of community transmission, with substantial numbers of COVID patients in hospitals and in intensive care,” UK Chief Medical Officers said in a statement on Monday.

“We are not confident that the NHS can handle a further sustained rise in cases and without further action there is a material risk of the NHS in several areas being overwhelmed over the next 21 days,” UK Chief Medical Officers said, adding that the new variant, believed to have originated in the UK, has led to rising cases “almost everywhere.”

The UK government is pinning its hopes for a route out of this disaster through its Covid-19 vaccination program, which began last month. Yet the country is long way from vaccinating the millions in the top priority groups mentioned by Johnson, including people “over the age of 70, all frontline health workers and everyone who is clinically vulnerable.”

Johnson suggests those groups are expected to have been offered their first doses by mid-February. But since the beginning of December, when the UK became the first in the world to administer the clinically approved Pfizer/BionTech vaccaine, more than 1 million people have received the immunization, according to a government press release.

On Monday, the first doses of the Oxford University/AstraZeneca vaccine were administered in the UK. “The vaccine means everything to me, to my mind it is the only way to get back to normal life,” Brian William Pinker, 82, said after receiving the first shot.

But optimism over the rollout of that vaccine — described as a “real pivotal moment” by UK Health Secretary Matt Hancock — was drowned out by the announcement of the new lockdown measures.

“Thanks to the miracle of science, not only is the end in sight, but we know exactly how we will get there. But for now we must, I am afraid, stay at home, protect the NHS and save lives,” Johnson said as he concluded his speech on Monday.

British teachers unions criticized the “chaotic reopening” of schools this week, “while the rate of infection is so high is exposing education sector workers to serious risk of ill-health and could fuel the pandemic,” six unions with members in the education sectors said in a joint statement.

Students in the UK were due to return to school from the Christmas break on Monday. But less than a week ago, the government announced the return to school would be delayed by two weeks for almost all high-schoolers and some primary (elementary) school children. Learning will move online.

Ruling Conservative party lawmaker Jeremy Hunt, who was the former health secretary, said it was “time to act” ahead of Johnson’s speech. “We need to close schools, borders, and ban all household mixing RIGHT AWAY,” he wrote.

While the lockdown announcement was met with relief by many, education unions furthered their call for school staff to be prioritized for vaccinations, according to PA Media. Others complained about the lack of notice provided to parents over the immediate closure of schools.

“This is beyond chaos. How can learning go online tomorrow when teachers were told to spend the last two weeks planning for reopening?” the shadow foreign secretary from the opposing Labour Party, Lisa Nandy, wrote on Twitter.
“What will replace exams? And since the PM was told by SAGE [the Scientific Advisory Group for Emergencies] that this would almost certainly be necessary on 22 December why is he so unprepared?” she added in regards to minutes released in December that showed scientists had informed ministers that schools should be closed.

What to make of Iran’s half-measures