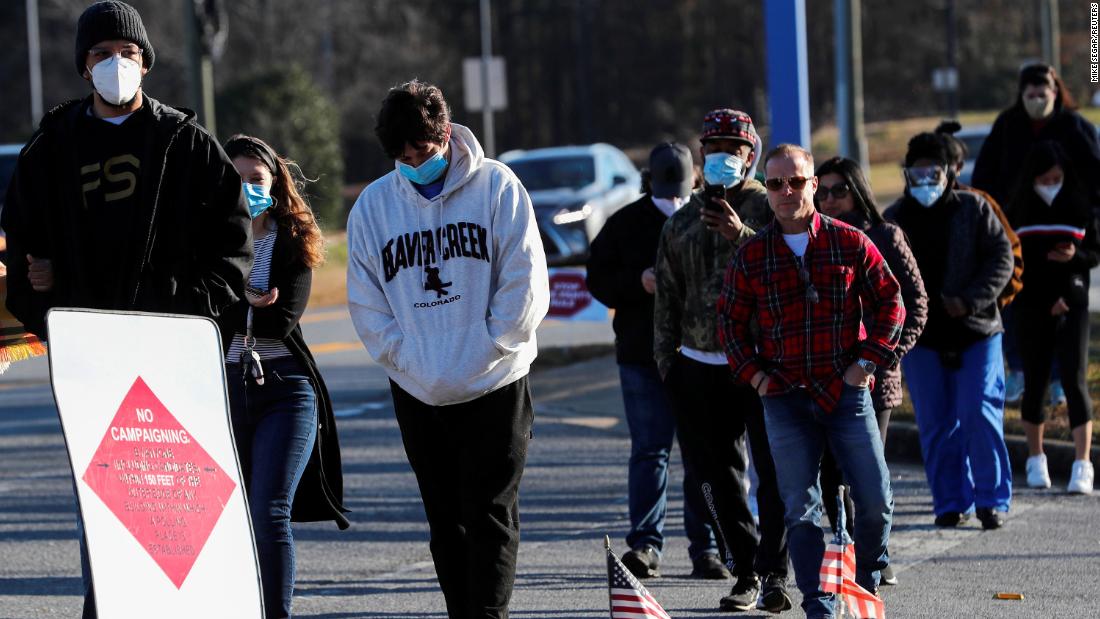 About three-quarters feel that way, a sharp contrast with the mere majority who say the state’s presidential election in November was conducted fairly.

Those views are sharply divided by party, as both Republican candidates for Senate in Tuesday’s contests have expressed support for a planned effort to reject Electoral College votes as they are presented to Congress on Wednesday.

Rev. Raphael Warnock won his race against incumbent GOP Sen. Kelly Loeffler, CNN projected early Wednesday morning. The other runoff election in Georgia remained too close to call, with GOP Sen. David Perdue neck-and-neck with Democratic rival Jon Ossoff.
Among Georgia Republicans who voted in those runoff elections, about three-quarters say the state’s presidential contest was not conducted fairly, while more than 9 in 10 Democrats say the election, which President-elect Joe Biden won by fewer than 12,000 votes, was fair.

Republicans voting in the Senate runoffs have a bit more faith in the runoff elections than they do in November’s contest. Just over half of Republicans now feel confident their votes will be counted accurately.

Among Democrats, more than 9 in 10 are confident their votes in the runoff will be counted accurately, as are 7 in 10 independents.

That’s a reversal compared with November, when 92% of Georgia Republicans were confident that votes would be counted accurately, while only 79% of Democrats felt the same, according to exit polls at that time.

There is also a deep divide over the presidential election’s accuracy by race. Only 4 in 10 White voters feel it was conducted fairly, but nearly 9 in 10 Black voters do, according to Tuesday’s early exit polls.

Who voted for whom?

Demographically, the electorate looks a bit older than those who cast ballots in November, according to the preliminary results of the exit poll, but it is similar in its makeup by gender, race and education.

Georgia voters who may have bucked their traditional election patterns in November’s clash appeared to return home to their corners, according to preliminary exit polls.

College-educated White voters, particularly men, shifted back toward Republicans after moving toward Biden in the general election. Perdue won college-educated men by only 14 points in November, but more than doubled that lead to more than 30 points in this runoff.

Meanwhile, the Democratic challengers appeared to erase any gains President Donald Trump had made among non-White voters in November. Ossoff consolidated Black voters around his bid, growing his lead from 76 points in November to 86 points Tuesday. Likewise, his lead among Hispanic voters was 30 points on Tuesday, up from 9 points in November.

Overall, among voters of color, 8 in 10 cast ballots for Ossoff and fellow Democratic challenger Warnock. Among white voters, 7 in 10 selected Perdue and Loeffler.

A majority of women and of college-educated voters turned out more for the Democrats, while a majority of men and voters without degrees supported the GOP candidates.

About 6 in 10 voters over 65 years old cast their ballots for Perdue, giving him a 24-point lead over Ossoff in that group. That’s slightly larger than the lead Perdue held over Ossoff in November.

But young voters moved toward the Democratic candidate. Two in three voters under age 30 cast their ballots for Ossoff, up from just 54% in November. Still, that group made up only 1 in 7 voters, down from 1 in 5 in November.

Perdue and Loeffler won the support of nearly two-thirds of rural and small-city voters, while Ossoff and Warnock were the candidate of choice for those in larger cities.

Suburban and independent voters were narrowly divided among the candidates.

Concerned about the coronavirus

Voting in Georgia has occurred amid rising Covid-19 cases and hospitalizations nationwide. About 7 in 10 voters say they are at least somewhat worried that they or someone in their families will be infected with the virus.

Majorities across party lines express worry about coronavirus reaching their family, including about 8 in 10 Democrats, two-thirds of independents and roughly 6 in 10 Republicans.

However, the partisan divides are larger over whether to prioritize limiting the spread of the virus or rebuilding the economy.

The CNN exit poll was conducted by Edison Research for the National Election Pool, a consortium of CNN, ABC News, CBS News and NBC News. Interviews were completed with 5,260 voters in one of three ways: In-person on Election Day at 39 polling places across Georgia, in-person at 25 early voting locations around the state or by telephone for voters who cast ballots by mail or in-person during early voting. Results for the full sample of voters have a margin of sampling error of plus or minus 2 percentage points, it is larger for subgroups.

This story has been updated with additional developments.

US Congress set to certify Joe Biden victory amid protests