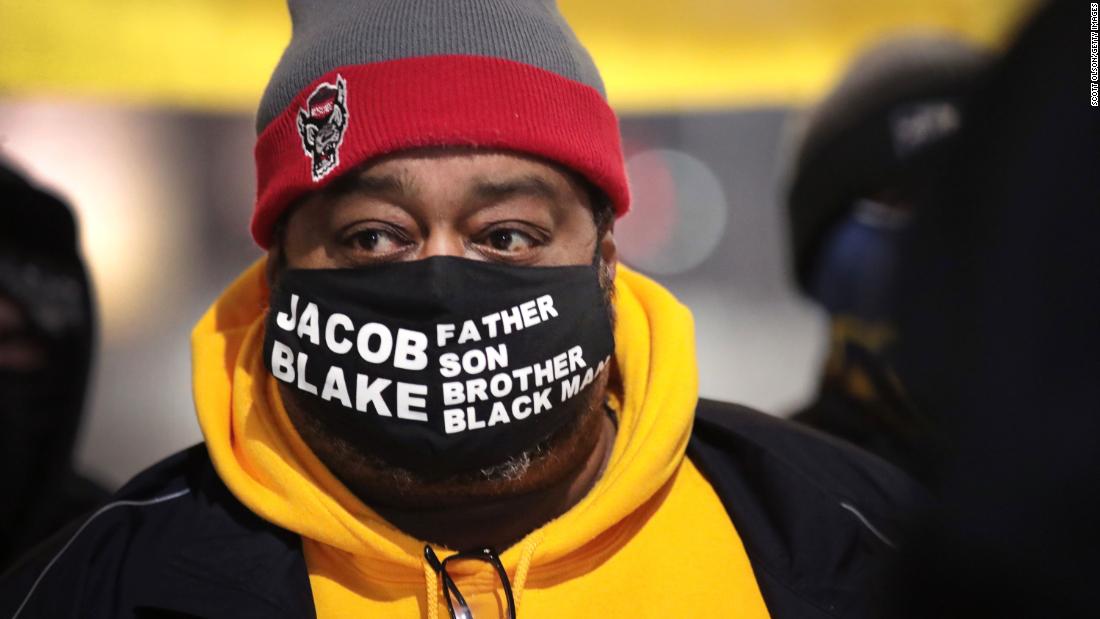 “We’re going to be proactive and not reactive,” said Bishop Tavis Grant, the national field director of Rainbow Push. “Those who want to take to arms have failed at realizing civil rights has not been about taking lives, it’s been about saving lives.”

Rusten Sheskey, a White officer, shot Blake, a 29-year-old Black man, while responding to a domestic incident on August 23, 2020 in Kenosha, Wisconsin. Blake survived the shooting but was left paralyzed from the waist down.

“We expected it,” Blake Sr. said. ” We understood what was going to come when they called in [the] National Guard.”

Ahead of the charging announcement, Wisconsin Gov. Tony Evers on Monday mobilized 500 National Guard at the request of local officials while the Kenosha City Council passed a unanimous resolution granting the mayor emergency powers.

Graveley held a 90-minute news conference Tuesday at which he walked reporters through his decision not to bring charges.

“I insist that this conversation be a complicated conversation, that it be a real conversation, not a simplistic one and that we talk accurately and thoroughly about the law and the facts,” he said.

Instead, he could approach the decision from the perspective of a legal professional, Graveley said, adding that it would not have been ethical to bring charges in a case in which he was not confident he could secure a conviction.

“(The public has) tried this case at their computer screen or in their living room,” he said. “As a professional, I am called upon to talk about how to try this case in a real jury room, in a real court room.”

The biggest obstacle, he argued, was that when the case is made that officers were acting in self-defense, the burden of proof falls on prosecutors to show that they were not.

According to Graveley, officers were called to the home of Laquisha Booker, who told 911 operators that Blake would not give back the keys to a car she had rented. When they arrived, officers tried to arrest Blake on a warrant for a previous incident, Graveley said. Sheskey fired after grabbing Blake by the shirt as he tried to enter the car.

“Jacob Blake, while actively resisting, arms himself with a knife,” Graveley said, adding that he’s heard supporters of Blake say he was unarmed. “It’s absolutely incontrovertible that Jacob Blake was armed with a knife during this encounter. … All the discussion that he’s unarmed contradicts even what he himself has said multiple times.”

Attorneys for the officer could argue that because officers saw Blake holding a knife and approaching the car where his children were after their mother exclaimed that he was going to drive off with them, they could not keep a distance from the threat and had to re-engage.

And though doctors who initially examined Blake said he was shot seven times to the back, a medical examiner evaluated the wounds and concluded that there were four entry wounds to his back and three to his left side, which could raise reasonable doubt, he said, as to whether his back was to the officer or not.

Graveley said he called on the US Attorney’s Office to do a parallel civil rights investigation that would be a separate investigation with its own conclusion.

An attorney for Blake’s family disputed that Blake posed a threat.

“There was no point in the video that is articulable for an officer to say that he was under harm at that particular point,” attorney B’Ivory LaMarr said in a news conference shortly after Graveley’s announcement. “I think that’s completely bogus and I think that is just a rationalization to try to show what is really, essentially, an intentional act,” .

Blake family attorney Ben Crump, along with LaMarr and co-counsel Patrick A. Salvi II, released a statement shortly after the announcement expressing their disappointment in the decision.

“We feel this decision failed not only Jacob and his family, but the community that protested and demanded justice,” the statement read. “Officer Sheskey’s actions sparked outrage and advocacy throughout the country, but the District Attorney’s decision not to charge the officer who shot Jacob in the back multiple times, leaving him paralyzed, further destroys trust in our justice system. This sends the wrong message to police officers throughout the country.”

Gov. Evers issued a statement Tuesday saying Blake’s life has been forever changed, and that his children experienced trauma “no kid should ever endure.”

“Today’s decision is further evidence that our work is not done — we must work each day in earnest toward a more just, more fair, and more equitable state and country, and to combat the racism experienced by Black Wisconsinites,” he said. “I hope for peace and justice for Jacob, his family, and the entire Kenosha community.”

“Wisconsin should adopt a statewide use-of-force standard providing that officers’ primary duty is to preserve life and that officers must use de-escalation techniques to avoid force whenever possible,” Kaul said in a statement. “And law enforcement officers conducting patrol activities should have body-worn cameras.”