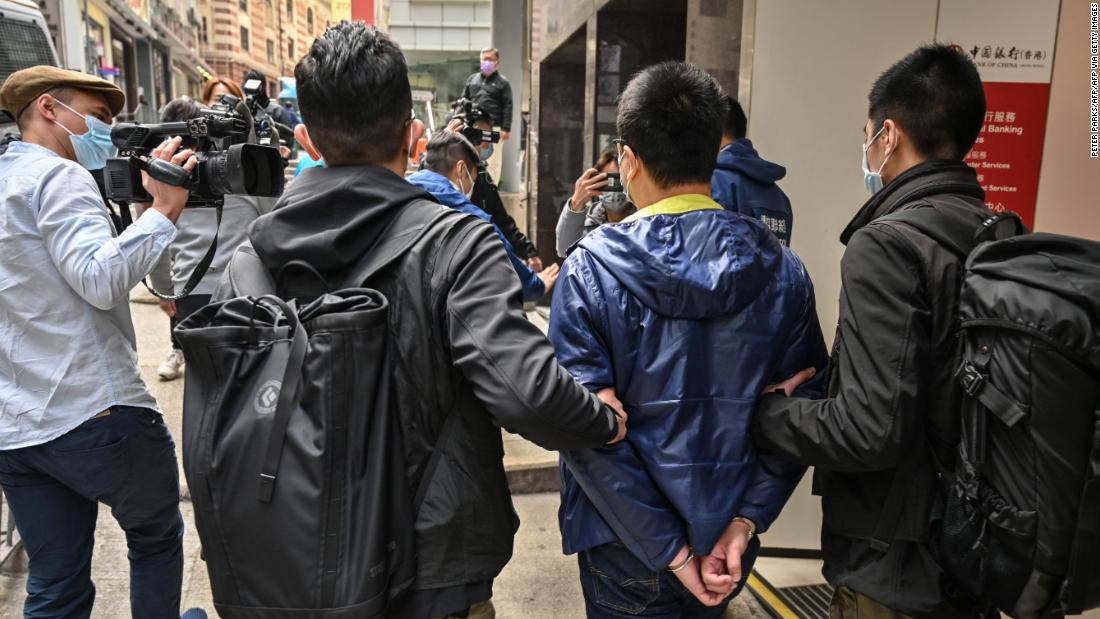 Speaking to reporters later Wednesday, a police spokesman said “the investigation is ongoing, we will not rule out arresting more people,” adding that more than 1,000 officers had been involved in the operation, which saw 72 locations searched and more than $200,000 in assets frozen.

“With the support of external forces, opposition groups and leaders have deliberately devised plans to hold this so-called ‘primary election,’ which is a serious provocation to the current electoral system and caused serious damage to the fairness and justice of the Legislative Council elections,” the Liaison Office, Beijing’s top representative in the city, said at the time.

On Wednesday, Hong Kong police appeared to follow through on that threat, arresting dozens of primary candidates in an early morning sweep, raiding homes across the city, as well as several media outlets and a law firm. Speaking to reporters, Hong Kong Secretary of Security John Lee said the police operation was only targeting “active elements” in the primary, and would not affect voters.

Lee said those organizing the “so-called primary election” were seeking to “paralyze the Hong Kong government” by winning a majority in the legislature as well as “mobilizing vast-scale riots in the streets” to cause “such mutual destruction that if successful (this plan) would result in serious damage to society as a whole.”

“That is why police action today is necessary,” Lee added.

Among those detained are many prominent former lawmakers, activists and district councilors. An American lawyer, John Clancey, who had assisted in the primary polls, was also arrested, his colleague Jonathan Man told CNN.

A US citizen, Clancey could potentially be the first foreign citizen who does not also hold a Hong Kong passport to be arrested under the national security law. Some of those previously arrested may hold dual-citizenship, which is permitted in certain circumstances in Hong Kong depending on whether someone was a foreign citizen prior to the city’s handover to Chinese rule in 1997.

The US Consulate in Hong Kong would not comment on the arrests. Clancey’s detention could pose a major diplomatic issue for Washington, amid an already tense relationship with China.

On Twitter, President-elect Joe Biden’s nominee for Secretary of State, Anthony Blinken, said that “the sweeping arrests of pro-democracy demonstrators are an assault on those bravely advocating for universal rights.”

“The Biden-Harris administration will stand with the people of Hong Kong and against Beijing’s crackdown on democracy,” Blinken added.

Wednesday’s arrests mark the most dramatic and sweeping escalation under the national security law since its introduction last year.

The law criminalizes secession, subversion, terrorism, and collusion with foreign powers, with life imprisonment as the most serious penalty for all offenses. The law also established a dedicated branch of the police and national security courts to hear some cases.

Hong Kong Chief Executive Carrie Lam and others had previously promised the law would be limited in effect, and only target a small number of fringe activists.

In a live video of his arrest recorded by district councilor and activist Ng Kin-wei, an officer can be heard telling Ng he is being arrested “for the crime of subverting state power.”

“During 2020, you were part of the ’35+’ primary elections, designed to elect 35 or more members of the Legislative Council with the goal of vetoing all government budget policies and motions in order to force the Chief Executive to resign,” the arresting officer says in the video. “(Such acts would) seriously interfere with and obstruct the lawful responsibilities of the government.”

Such a scheme had been proposed by prominent pro democracy activist Benny Tai as a potential tactic to restart the long-stalled political reform process in Hong Kong, in the unlikely situation that pro-democracy candidates won a majority in the semi-democratic legislature, where around half of seats are assigned to so-called “functional constituencies,” chosen by business and other groupings that tend to favor Beijing.

Primary elections are a normal function in democracies around the world. At the time of the Hong Kong vote, the United States Democratic primary, which Biden won, was still ongoing. The Hong Kong pro-democracy activists have also held such votes in the past, in an attempt to match the organization and discipline of the rival pro-Beijing camp and avoid splintering support.

Voting against the budget and forcing the chief executive to resign would have been legal prior to the national security law, similar to a “vote of no confidence” that prompts a general election in many democracies. The city’s constitution also contains provisions to deal with such an event, enabling the chief executive to call new legislative elections, and to pass a preliminary budget to enable the government to continue to function.

Under the law, someone convicted of subversion “of a grave nature” can face life imprisonment or a fixed-term imprisonment of not less than 10 years, while others can face between three and 10 years in prison.

Those detained include former Democratic Party lawmakers James To, Andrew Wan, and Lam Cheuk-ting, who had until late last year been members of the city’s Legislative Council, before they and all other members of the pro-democracy bloc stepped down in protest of the government’s decision to eject several lawmakers.

Joshua Wong, the prominent democracy activist jailed late last year, is also being investigated in relation to the primary. His home was raided Wednesday morning, a post on his verified social media said.

“I lost count already. But believe all who participated in the pro-democracy primary in Hong Kong last year will be arrested, organizers included,” Lo Kin-hei, chairman of the Democratic Party, said on Twitter. “Very likely over 40 or even 50.”

A law firm connected to the primary, Ho Tse Wai and Partners, was also raided early Wednesday, lawyer Jonathan Man confirmed to CNN. Stand News, a pro-democracy-leaning media outlet, was also visited by police, according to a video posted online.

“How can people taking part in a primary election to select candidates be subversive and in breach of the National Security Law,” she said. “This is a blatant attempt to intimidate pro democracy activists and warn people not to engage in politics and collaboration.”

Speaking to CNN late last year, Shum — an elected district councilor — predicted it was a matter of when, not if, he would be arrested, and likely ejected from his seat.

“After 2019, I think we are facing a complete crackdown on democratic movement. And at the level of District Council, we are popularly elected by Hong Kong people … and they may see that as a threat,” Shum said.

Chief Executive Lam appeared to address the city’s political discord in her New Year’s address. “Every time there are quarrels in society, in fact people pay a hefty price,” she said. “That is why for 2021, my biggest hope is for society to have harmony. So that the SAR government, and other public bodies, have more room to do concrete things for Hong Kong.”