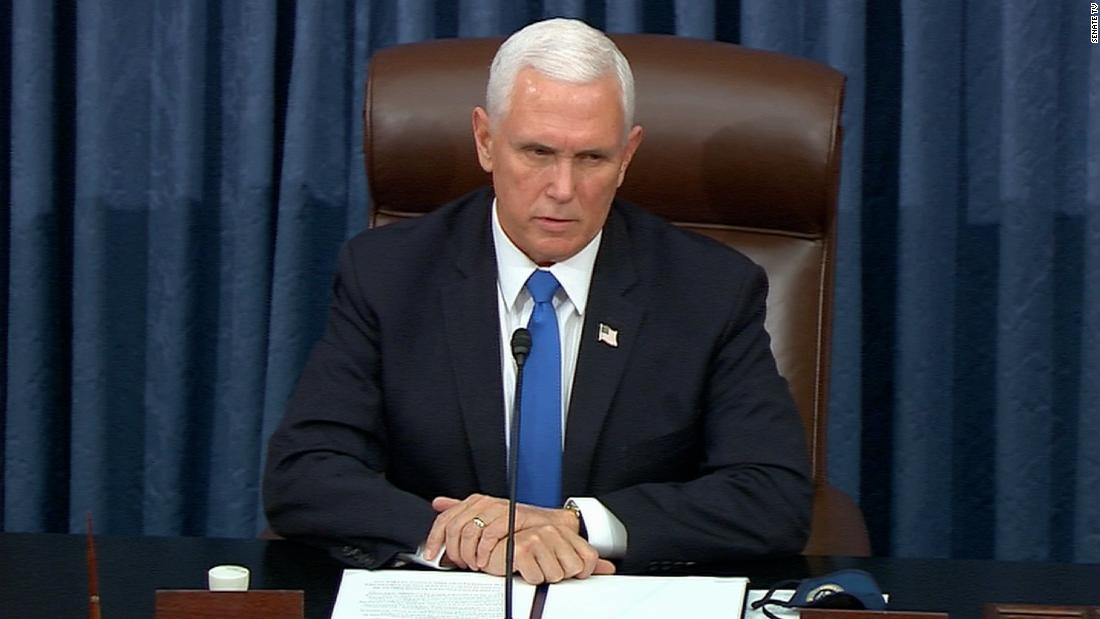 “That’s the plan,” the source said.

Another source said the vice president has faced pressure from many of those around him who are encouraging him to attend.

Word of Pence’s intention to watch President-elect Joe Biden take his oath of office in person spread just one day after the first major break between Pence and President Donald Trump — when Pence defied the President by performing his constitutional duty to certify the election results. Pence had faced intense pressure from Trump and his supporters to somehow stop the ceremonial vote counting during a joint session of Congress, although he told the President it was not within his power to do so.

A mob incited by Trump earlier in the day Wednesday descended on the US Capitol where Pence was presiding over the counting of the Electoral College results, forcing him and his family to flee the chamber when the pro-Trump rioters infiltrated the building.

Pence’s office maintained on Thursday that he has not been asked to be a guest at Biden’s inauguration.

“You can’t attend something you haven’t received an invitation to….” Devin O’Malley, Pence’s deputy press secretary tweeted after Politico first broke the news of the vice president’s plan.

Paige Waltz, spokesperson for the Joint Congressional Committee on Inaugural Ceremonies, said: “The President and vice president are never formally invited to the inaugural ceremonies. We have not been told by the president or vice president whether they will be there.”

A source with the committee said the invitation to the outgoing president and vice president is traditionally done on a staff level, which is why they never receive a formal invite.

“With all of the noise surrounding the election results, we had always intended to reach out and start coordination once certification was complete — so today,” the source said.

Pence’s decision to attend marks another major break between Pence and Trump, who publicly attacked the Vice President on Wednesday as Pence prepared to certify the election results.

Trump did not call to check on Pence’s wellbeing even as an angry mob roamed the halls of the Capitol shouting about Pence, and even after the vice president was evacuated from the House floor.

One rioter was shot and killed by law enforcement as she joined others in breaking into the Capitol building, and a number of law enforcement officers were injured in the violence that broke out during the insurrection.

Earlier in the day, Trump had addressed the crowd of his supporters who traveled to the nation’s capital to protest the election results, and had encouraged them to march to Capitol Hill.

A wave of resignations followed Wednesday’s violence, with Trump aides stepping down in disgust over events that Republicans and Democrats alike have blamed squarely on the President. Transportation Secretary Elaine Chao became the highest-ranking Trump administration official to resign due to the insurrection when she stepped down from her Cabinet post on Thursday with a statement linking her decision to the violence.

After the election results were tallied after the November 3 vote, government agencies held off on transition briefings with Biden’s staff, and so far, Trump has not met with his successor — a meeting that’s generally been tradition.

On Thursday, Charlotte Pence Bond, the vice president’s daughter, tweeted her congratulations to Biden and Harris.

This story has been updated.

CNN’s Dan Merica and Maegan Vazquez contributed to this report.