Political differences: 10 ways to de-escalate political discussions with friends and family who disagree with you 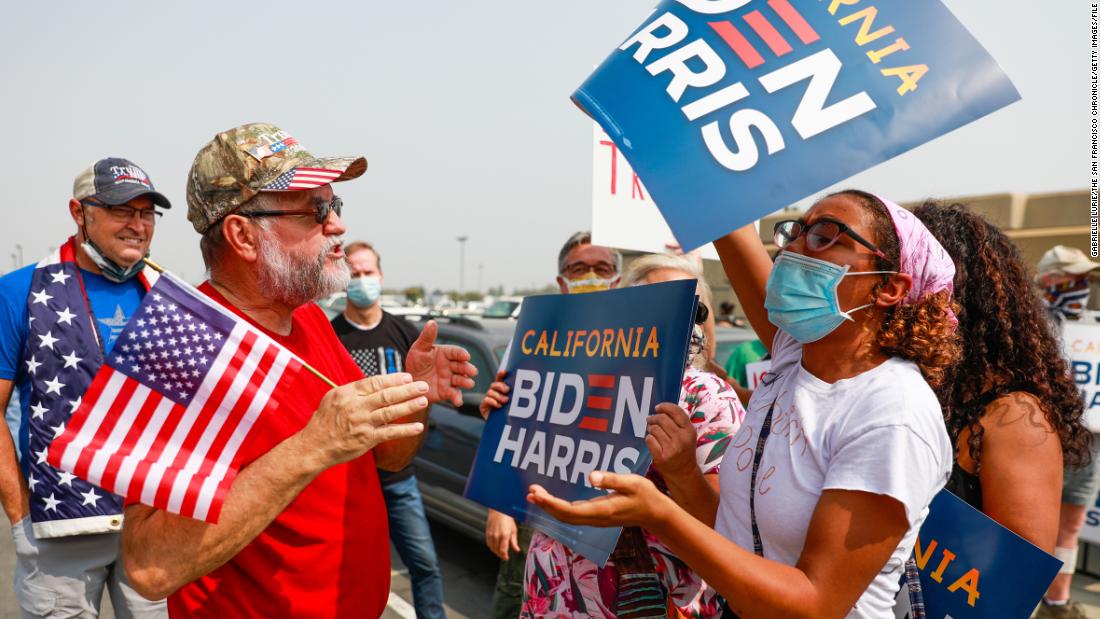 While only a radical few may condone violence, disappointment and animosity over the outcome of the election — fueled by false tales of election fraud — is widespread among Trump supporters.

That bitterness could threaten relationships with family, friends, colleagues and loved ones, as many find themselves on opposite sides of a seemingly unbridgeable ideological chasm.

Isn’t there a way to communicate that allows both sides to be heard without further tearing these relationships apart?

CNN put that question to experts before the November presidential election. The answer: absolutely. Here are 10 suggestions on how to de-escalate angry conversations and begin to bridge the gap.

Ask yourself: Why am I doing this?

It’s important to know why you want to reach out.

“In terms of deciding whether or not you want to have a conversation with somebody across political lines, it is important to be aware of what your own motivations are,” said Tania Israel, author of “Beyond Your Bubble: How to Connect Across the Political Divide: Skills and Strategies for Conversations That Work.”

“If your goal is to change the other person’s mind in one conversation, you’re going to be really disappointed, because you’re not likely to be that effective,” cautioned Vaile Wright, American Psychological Association’s senior director of health care innovation.

It can help to keep your relationship with that other person top of mind, suggests Jacksonville, Florida, clinical psychologist Nina Silander, who has written about the lack of conservative views in the field of psychology.

“Think about why it is you care about this person or why you like them or appreciate them,” Silander said. That can soften your response and help you “better articulate your perspective and lend credence to their viewpoint.”

You may find it difficult to acknowledge a perspective that you know to be based on disinformation. Entrenched views among certain age groups have become more common as people share exaggerated or falsified news via social media.

A study of shared Facebook posts during the 2016 election found that while most people did not share disinformation, the ones who did were more likely to be over age 65 and conservative. About 11.3% of people over 65 shared links from a fake news site, while 3% of those between 18 and 29 did, the authors wrote in The Washington Post.
Lists of fake news sites are available, such as this one by Snopes or this tip sheet from Melissa Zimdars, an associate professor at Merrimack College in Massachusetts, but shoving those in front of your friend or relative isn’t likely to elicit a positive response.

Instead, try to approach the issue by acknowledging the emotions of the person who has chosen to believe fake news, even as you gently discuss the facts.

“It’s clear that we need healthy and productive ways to engage across different opinions, but we should never have to accept false information. We can and should challenge non-factual statements. As we approach these engagements, it is more productive to not challenge each other’s emotional reaction to a situation,” said Caroline Hopper, managing director of the Citizenship & American Identity Program at The Aspen Institute, which oversees The Better Arguments Project along with The Allstate Corporation and educational nonprofit Facing History and Ourselves.

The Better Arguments Project wants to teach us how to have more productive arguments. These conversations don’t have to drive us apart, the group says. In fact, by learning to argue “better,” we can come together.

“We need to be interacting within a realm of fact, but we also need to leave room for human emotion, feelings like hope and fear, which we know can absolutely steer discourse in this country just as much as facts can,” Hopper added.

“For example, a person should not challenge someone telling them: ‘I am upset about the outcome of this election because it makes me feel afraid.’ Rather, we should seek to understand more about why that opinion is held.”

To de-escalate ill will, avoid approaching the exchange with a list of talking points or facts in mind, experts suggest. Instead, you want to ask questions and truly understand the response.

“The most important thing you can do is to listen to the other person,” advised Israel, a professor in the department of counseling, clinical and school psychology at the University of California, Santa Barbara.

To do that, enter the conversation with simple curiosity, she advised.

Be prepared to listen, not talk

To do that, you may have to learn and practice some new (or rusty) skills, the type taught in marriage counseling, for example.

Repeating back what you think you heard and asking questions are techniques known to elicit clarifications, as your loved one realizes either they misspoke or you misunderstood.

“Minimizing misunderstanding is incredibly important — repeating back what we think we’ve heard, asking questions to clarify, looking and really striving for opportunities to share and find common ground can go a long way,” Silander said.

“It helps you to really listen if you know that you’re going to need to summarize,” Israel added. “It’s also going to help them to feel more understood, and that’s going to help to create that connection and keep the entire conversation on a calmer level.”

Go a step further and acknowledge the other position, Silander suggests.

“Trying to understand someone else’s position, or trying to see the world through their eyes is what we call in developmental psychology, ‘theory of mind.’ It’s something we learn to do as older infants or toddlers, understanding that other people can see things differently,” Silander said.

Using “I” statements instead of “you” statements is another important way to facilitate dialogue, Wright said.

“For example, you could say ‘I have a lot of concerns about this election, and how it might affect health care because I have a preexisting condition.’ Keep it about you and your feelings and about the policies, not the people,” Wright added.

Experts CNN spoke to point out that these skills not only will help better our dialogue across political lines, but in our daily lives as well.

Beware the minefield of human nature

Expect to feel an emotional flare-up when you hear things you don’t like. It’s part of being human, an ancient and automatic reaction to any perceived threat to our well-being.

“It turns out that our bodies don’t necessarily know the difference between the saber-toothed tiger and a shocking news event or a heated conversation with another person,” Israel said.

Our sympathetic nervous system goes into action when we perceive a threat, flooding the body with adrenaline and other stress hormones. Key signs of that reaction can be a racing heart, tense muscles, even a flushed face.

“We are ready to fight or to run away from the threat,” Israel said.

Such reactions to politics can even harm our health, research has found.

The hospitalization rate for heart attack and stroke in a major California health system was 1.62 times higher in the two days immediately after the 2016 presidential election than the same two days the week before, a study released in late October said.

“This is a wake-up call,” said study author David Williams, chair of the department of social and behavioral sciences and a professor at the Harvard T.H. Chan School of Public Health, in a statement.

“We need to pay greater attention to the ways in which stress linked to political campaigns, rhetoric and election outcomes can directly harm health.”

It’s possible to interrupt our natural tendency to become stressed and anxious by using grounding techniques as soon as we feel ourselves tensing, psychologists say.

‘”We can do deep breathing,” Israel said. “We can physically ground ourselves by noticing the feeling of the chair underneath us or by touching our own arm and paying attention to that.”

Set yourself up for success by making sure you’re in top mental shape for the conversation, Wright suggests.

“It’s not great to have these conversations at the end of a long, hard day, or when people have been drinking or a situation where you’re not as emotionally in control as as you’d like to be,” she warned.

It’s natural for people to want to be in groups with similar viewpoints, or to “find our tribe,” experts say.

“During an election year, we can become rather tribal, and that can be inflamed by media, it can be flamed by special interest groups, and it caters to our own human nature,” Silander said.

“The people media choose for spokespeople usually are more extreme in their views, but it’s also our basic psychology that we tend to have these distorted perceptions of people who we see as being different from ourselves,” Israel said.

This instinctual feeling of “us versus them” intensifies with divisive rhetoric, Wright said, which can lead us to label people in ways that make it difficult to find common ground.

To combat that, Silander suggests learning about the fundamental value differences between liberals and conservatives in an objective and considerate way.

“It really enables us to better understand and empathize with one another,” Silander said. “And we can start to see that maybe we often share concerns that are more similar in nature than we would have thought, even if we disagree with what solutions to those concerns would look like.”

As an example, Silander points to civil rights issues as a way for liberals to try to understand why some conservatives believe mandates to wear masks are an infringement on personal liberties.

“The underlying theme or principle can at least be one way to relate even if we disagree,” she said.

Join a group and practice

Practice makes perfect, as they say. Over the last four years, groups of people dedicated to bringing political opposites together have sprung up around the country.

Joining a training — such as those offered by The Better Arguments Project — can jump-start your skills for that all-important talk with a loved one.

“The concept of a better argument is really all about caring more about one another than we do about our opinion on a specific subject,” Hopper said.

If we politely ignore our differences — especially with those closest to us — we are “giving up our public discourse, our family discourse, to the voices that are the most polarized,” she said.

“We’re not going to be able to seek any kind of informed solutions together because we’re not getting the full scope of information that we need,” she added.

To have a “better argument,” one has to care about the other person, not just their opinion about the issue.

“We ask participants to ‘be human first.’ What we mean by that is you shouldn’t only engage with each other about your opinions; share more about yourself and seek to learn more about the person with whom you are engaging,” Hopper said.

“Otherwise, you will only see one another only as opponents, rather than as people representing very full lives and experiences that are shaping those opinions,” she said. “The priority is to walk away from that interaction caring more about that other person than about whether or not you won that argument — be human first.

“This also means that you have a right to expect that your own humanity should be acknowledged and respected. There is no room for hate and bigotry in a ‘better argument.'”

This story is updated from a story that originally published on November 4, 2020.

CNN’s AJ Willingham and Eric Levenson contributed to this report.

Michigan once again among top states in automotive manufacturing