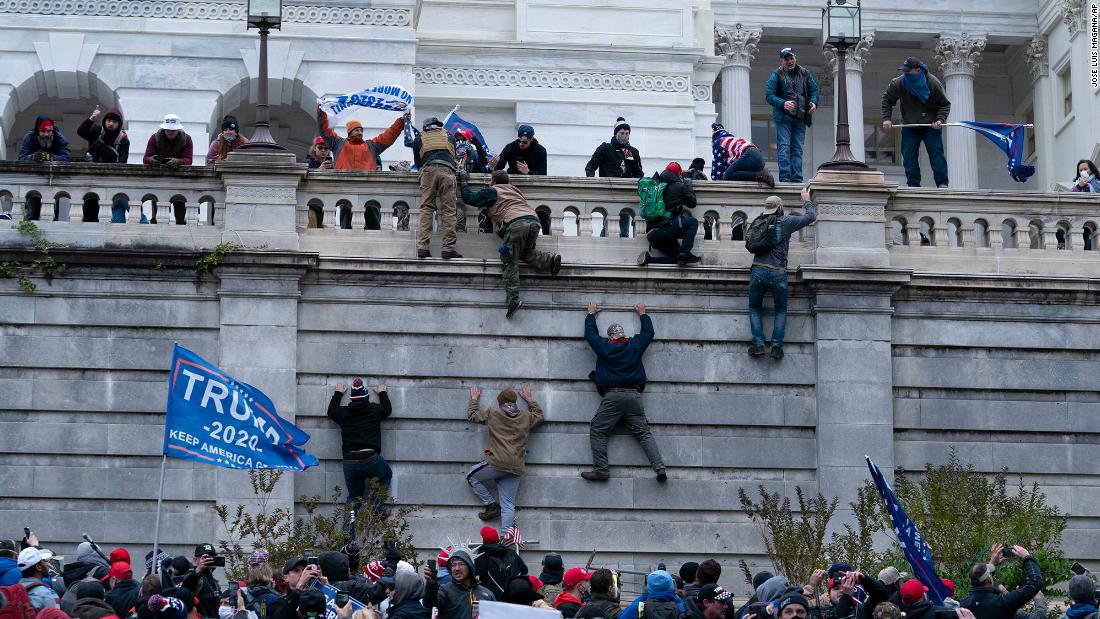 The violence erupted after US President Donald Trump spoke to protesters to repeat his false claim that he won the US election in November.

As the chaos unfolded, several foreign embassies in Washington issued stay-at-home notices for their citizens, and European leaders began deploying the language usually reserved for incidents in which democratic values and rule of law are under siege.

And on Thursday, UK Prime Minister Boris Johnson issued a strong condemnation against both the rioters and President Trump.

“On the United States and the election, I want to say that all my life America has stood for some very important things — an idea of freedom and an idea of democracy. And … so far as he encouraged people to storm the Capitol and insofar as the President has consistently cast doubt on the outcome of a free and fair election, I believe that that was completely wrong,” he said a press conference, in response to a journalist’s question.

“And what President Trump has been saying about that has been completely wrong and I unreservedly condemn encouraging people to behave in the disgraceful way that they did in the Capitol,” he added.

NATO Secretary-General Jens Stoltenberg, who rarely comments on the internal affairs of the alliance’s member states, urged Americans to respect the outcome of the November election. His call was echoed by European Parliament President David Sassoli, who added, “We are certain the US will ensure that the rules of democracy are protected.”

There were however notes of schadenfreude in the responses from Russian and Iranian officials. Iranian President Hassan Rouhani called Trump a “sick person” who had disgraced his country during a televised speech Thursday on Iran’s state-run news agencies.

“What happened in the US shows how fragile Western democracy is,” he said. “Despite all their scientific and industrial achievements, we see a huge influence of populism. When a sick person takes office, we see how he disgraces his country and creates troubles for the world.”

Russian President Vladimir Putin — who has consistently rejected American “unilateralism” as the world’s global power — made no statement on last night’s chaotic events, but his lawmakers did not hold back.

“The celebration of democracy is over. Alas, this is rock bottom, I say this without a hint of gloating,” Kosachev wrote on Facebook Thursday. “America no longer defines the course, and therefore has lost all right to set it. And even more so to impose it on others,” Kosachev said.

Kosachev cited Trump’s “narcissism, eccentricity and adventurism” and “impersonal political platforms of Democrats and Republicans” as reasons behind the unrest.

“America is split in half, and the equal halves will always challenge any voting results that are to their disadvantage,” he wrote.

A lawmaker from Russia’s lower house of parliament and a member of the information policy committee, Anton Gorelkin, praised the social media platforms’ decision to restrict Donald Trump’s accounts.

“Events in the United States once again show the power of social networks as tools for influencing the masses,” Gorelkin wrote on his Telegram channel.

Russian state TV anchor Evgeny Popov noted sarcastically on Twitter that “the world is bursting at its seams. Thank God, not our world. Merry Christmas!”

Allies saw last night’s chaos as a disturbing warning for democracies, with some top leaders imploring Trump to accept the results of the free and fair 2020 election in the US.

German Chancellor Angela Merkel said during a meeting on Thursday that the riots made her feel “angry and sad.”

“A basic rule of democracy is after the election there are winners and losers, both have to play their role with decency and responsibility so that democracy itself remains the winner,” she said.

“I regret very much that President Trump did not admit defeat in November and again yesterday,” she added.

Israel’s Prime Minister Benjamin Netanyahu described the violence as “disgraceful” and said it should be “vigorously condemned,” as other Israeli political figures hinted it contained a warning for their own country. “Lawlessness and violence are the opposite of the values we know Americans and Israelis cherish,” he said.

Gideon Saar, leader of the right-wing New Hope party, and tipped as a strong challenger to Netanyahu in March’s general election, said in a statement, “The events serve as an important reminder of the dangers of polarization and extremism in society. We must never take democracy and its institutions for granted.”

“Canadians are deeply disturbed and saddened by the attack on democracy in the United States, our closest ally and neighbour,” tweeted Canadian Prime Minister Justin Trudeau. “Violence will never succeed in overruling the will of the people. Democracy in the US must be upheld — and it will be.”

Leaders from the Pacific responded as well. Australian Prime Minister Scott Morrison condemned the “very distressing” scenes of violence, and New Zealand Prime Minister Jacinda Ardern tweeted, “What is happening is wrong. Democracy — the right of people to exercise a vote, have their voice heard and then have that decision upheld peacefully should never be undone by a mob.”

“Shocking & deeply sad scenes in Washington DC — we must call this out for what it is: a deliberate assault on Democracy by a sitting President & his supporters, attempting to overturn a free & fair election! The world is watching! We hope for restoration of calm,” said Irish Minister of Foreign Affairs Simon Coveney.

Some countries warned their citizens in the US to be careful of the violence. “On January 6, there is a mass protest in DC, and the local government has announced an emergency curfew,” said the Chinese embassy to the US in a statement, cautioning citizens to pay attention to the situation and “to be vigilant.”

After rioting began in Washington, Turkey’s Foreign Ministry also recommended that its citizens in the US “stay away from crowded places and places where shows are held.”

Many, including top diplomats and leaders in Iceland, France, Austria, Poland, Ecuador, Colombia and Scotland among others, reminded the US of its role as a model of democracy in the world, and expressed disbelief at the breach of the US Capitol — the first time that the building had been overrun since a British attack during the War of 1812, according to Samuel Holliday, director of scholarship and operations with the US Capitol Historical Society.

“This is not America,” wrote European Union High Representative Josep Borrell, who described the mob’s actions as “an unseen assault on US democracy, its institutions and the rule of law.”

“The US Congress is a temple of democracy. To witness tonight’s scenes in #WashingtonDC is a shock,” said President of the European Council Charles Michel.

Ursula von der Leyen, President of the European Commission, also wrote, “I believe in the strength of US institutions and democracy. Peaceful transition of power is at the core. Joe Biden won the election.”

“I look forward to working with him as the next President of the USA,” she added.

CNN’s Mary Ilyushina and Andrew Carey contributed to this report.

‘Why I quit my job after my home burned down’