Covid-19 vaccine: When can YOU get it? It depends on your health, occupation and where you live 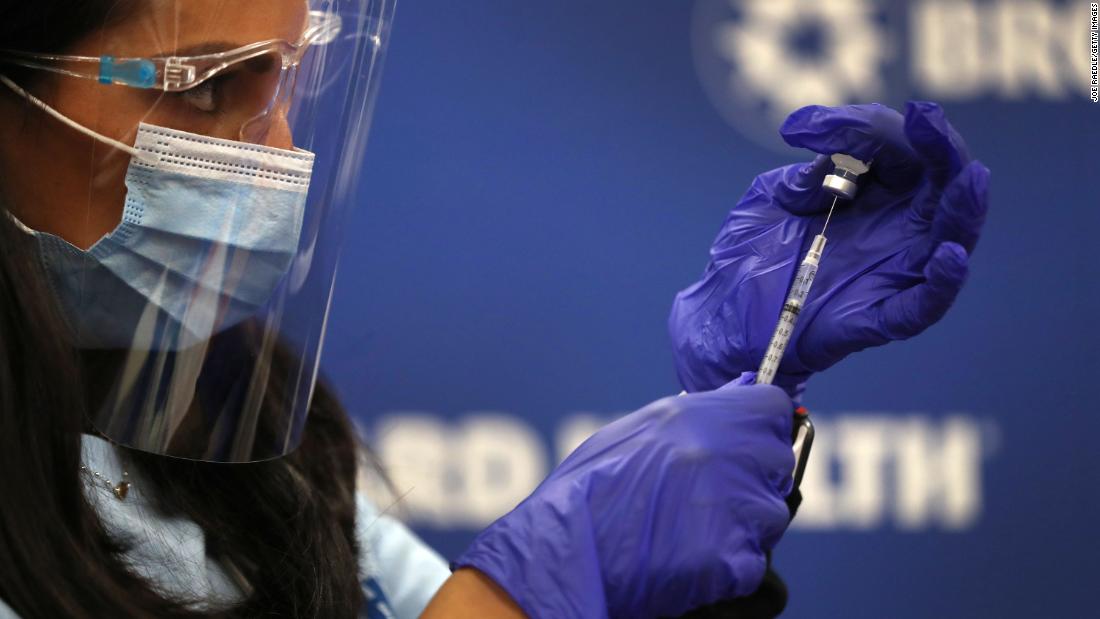 A lot of factors play into the answer, and it depends on each person’s health, what they do for a living and where they live.

As for when Americans can get back to in-person socializing, “I would leave that to Dr. (Anthony) Fauci,” she said, referring to the nation’s top infectious disease expert and President-elect Joe Biden’s incoming chief medical adviser.

You have more questions; here are more answers:

Who is getting vaccinated first?

As has been widely reported, health care workers and residents of long-term care facilities are first in line, followed by adults ages 75 and older and frontline essential workers such as first responders.
The next phase will be adults between 65 and 75, those between 16 and 64 with high-risk medical conditions and “other essential workers,” according to the US Centers for Disease Control and Prevention’s Advisory Committee on Immunization Practices.
The CDC accepted the ACIP recommended allocation phases Tuesday. To be clear, the CDC guidelines are only that. States wield a good deal of authority in how the vaccines are handled, and Florida Gov. Ron DeSantis signed an executive order to ensure senior citizens (65 and older) are among the first members of the general public to be vaccinated.

Who is an essential worker?

The ACIP defines frontline essential workers as anyone employed in “sectors essential to the functioning of society (who) are at substantially higher risk of exposure” to the coronavirus. Besides first responders, that category includes those working in education and child care, food and agriculture, manufacturing, corrections, the US Postal Service, public transit and grocery stores. There are roughly 30 million people in this category.

Jockeying for the vaccine

When will the general public get the vaccine?

This is a moving target that will be dictated by numerous variables. Dr. Vivek Murthy, Biden’s nominee for surgeon general, said he believes it may take until late spring to finish vaccinating high-risk populations, if all goes according to plan. That means mid-summer may be a “realistic” timeline for the general public to begin vaccinations, he told NBC last month.

“If everything goes well, we may see a circumstance where, by late spring, people who are in lower risk categories can get this vaccine,” he said, “but that would really require everything to go exactly on schedule. I think it’s more realistic to assume that it may be closer to mid-summer, early fall when this vaccine makes its way to the general population.”

A recent ACIP chart indicated the general public may start getting the vaccine in about 20 weeks — putting the target in May — which is “kind of in line with what I was thinking, too,” Hannan said.

Because states will handle rollouts differently, Hannan says it’s a good idea for people to monitor state health department websites for specifics. Some states are setting up “public-facing dashboards,” she said, and the New Mexico Department of Health on Wednesday announced a website that will allow residents to register for notifications on when they qualify to receive the vaccine.

How much will it cost?

The federal government has spent billions of dollars to purchase vaccine doses from a number of companies — including Pfizer and Moderna — and as a result, vaccines will be free to Americans.

“We’ve paid for the vaccines, we paid for the shipping costs, and the administration costs … will be covered by healthcare payers, private insurance, Medicare, Medicaid, and our program to cover Covid-19 expenses for the uninsured,” US Health and Human Services Secretary Alex Azar said at an event in early December.
However, vaccine providers may charge a fee for the administration of the vaccine, according to the CDC.

What factors drive the rollout phases?

The two main factors are supply and demand — essentially, how much vaccine is available and how many people want to receive it, Hannan said.

While Pfizer/BioNTech’s and Moderna’s vaccines have already received emergency use approval, Johnson & Johnson and AstraZeneca have vaccines in the works, which if approved, would increase supply, she said.

On the demand side, it will depend how many people in the first vaccination phases line up for injections. If the numbers are high in the priority groups, it will take longer to move to the general public phase, Hannan said.

“So far, it does look like there is high demand, that health care workers are excited to get the vaccine. They’re lining up to get it. They’re posting pictures of themselves getting it,” she said.

Health professionals don’t want doses sitting around unused, so there will be disparities from state to state. For instance, she said, if priority groups in one state are more hesitant to get vaccinated, it may reach the general public faster because the state will move to the next phase to utilize the doses it has on hand.

US Surgeon General Jerome Adams said on Twitter that any states able to expand vaccination to additional phases should do so “if current supply exceeds demand in phase 1a.” He emphasized that the ACIP’s guidelines are “recommendations — not mandates.”

Kentucky Health Commissioner Dr. Steven Stack said those guidelines “should not stand in the way” of facilities using up their doses. He said officials needed to be “flexible or else we don’t administer the vaccine.”

“A shot in a willing arm is ultimately a higher priority than a shot in only certain arms,” he said.

What power do states have?

The vaccine providers have committed to following ACIP guidelines, but there is leeway, Hannan said.

“States will give their own guidance, and just by virtue of where they send the vaccine, states are making decisions about who is getting it first,” she said.

ACIP provides “the compass that everyone is following,” she said, but states have discretion when it comes to matters like underlying conditions and essential workers. One state might choose, based on its circumstances, to prioritize the elderly or long-term care facilities over health care workers.

In the 2009 swine flu pandemic, young children were at especially high risk, so many states intensely focused on children and health care workers, while other regions saw rapid improvement in their numbers and were able to shift their focus to the general public sooner. Rhode Island was still administering vaccinations in schools while Texas was distributing vaccines to pharmacies, Hannan said.

“The categories are broad enough for states to be more focused or less focused on certain populations,” she said.

With doses limited, as they are now, observers aren’t seeing much variation from state to state, but disparities will be more apparent as the vaccine becomes more available.

Who is making decisions at the state level?

It will ultimately fall on state governors to make calls on who gets the vaccinations and when, Hannan said.

However, most states have advisory committees or tasks forces in their health and preparedness agencies that will provide recommendations to governors.

State officials can also lean on ACIP guidance, and the CDC has a jurisdictional playbook, which the National Association of County and City Health Officials says outlines the “strategy for delivering and administering a COVID-19 vaccine as quickly and efficiently as possible.”

“It’s difficult for governors to stray too far,” Hannan said. “Hopefully, we won’t see it get political.”

Gov. DeSantis, appearing last month at a vaccination press event in The Villages, a central Florida retirement community, flouted the CDC guidelines, saying the state wasn’t bound to follow them.

“If you’re a 22-year-old working in a food services — let’s say at a supermarket — you would have preference over a 74-year-old grandmother. I don’t think that that is the direction that we want to go.”

What if people try to cut the line?

Concierge medical services in California have already reported wealthy residents seeking to pay thousands to skip the queue for the vaccine. Gov. Gavin Newsom has vowed to monitor the situation and ensure ethical standards are maintained so “those with influence are not crowding out those that are most deserving of the vaccines.”

It’s a matter each state will have to handle individually, Hannan said, but in the grand scheme of a nationwide vaccination campaign, it isn’t the most troubling concern.

On one hand, it’s an indicator of high demand, which means more vaccine acceptance, she said. On the other hand, those administering the vaccine have enough to worry about without the burden of checking everyone’s identification, occupation or medical history. It’s all a matter of balance, she said.

“We don’t want to be turning people away, and we don’t want vaccines sitting around,” she said. “States are going to have to address it when situations like this arise, rather than make people go through a lot of hoops. … I don’t think it’s a great thing, but I’d rather have that than people not wanting the vaccine.”

Covid-19 vaccine: When can YOU get it? It depends on your healthCovid19dependsHealthLiveoccupationoccupation and where you live - CNNus
0
Share