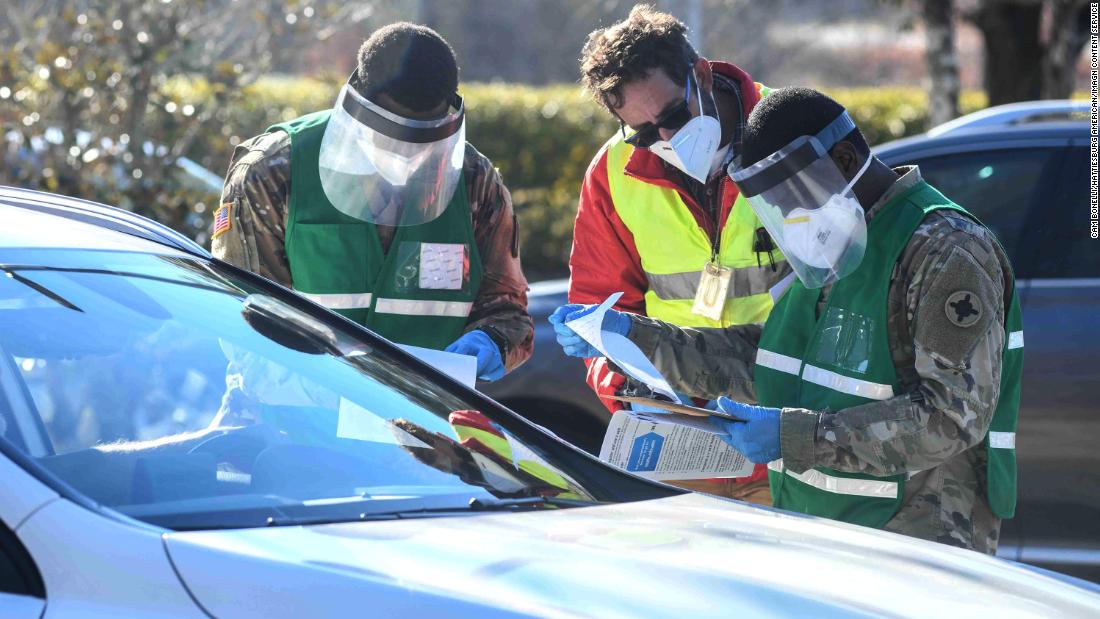 So far, this year is no slouch, either.

Nearly 20,500 National Guard members were working across the country on Covid-19 relief efforts as of Thursday. They represent the majority of Guard members currently deployed domestically, the Guard says.

With most holding civilian jobs until they’re called up for overseas and homeland missions, Guard members are commonly activated stateside for natural disasters, as they were last year for wildfires and severe storms.

At its busiest, the National Guard had more than 86,400 members serving stateside in early June, largely for Covid-19 or civil disturbances in the wake of George Floyd’s death in Minneapolis, the Guard says.
“Those are numbers that you just wouldn’t think about as a Guardsman in these days and times,” Army National Guard Command Sgt. Maj. John Sampa said last month.

Some are inoculating people against Covid-19

The state has set up 13 drive-through vaccination sites for qualified residents — such as first responders — at places like school parking lots and rented property, said Paul Raymond Jr., spokesman for the New Hampshire Joint Information Center.

About 100 Guard members are split among the sites, making sure the vaccines get there, managing traffic and signing people in. And a few with health backgrounds — medics and nurses — administer the shots.

It’s been part of a whirlwind year for Maj. Lindsey Whelan, the New Hampshire Air National Guard’s chief nurse, who was activated just a few weeks ago to oversee a site in Nashua that’s receiving about 200 patients a day.

Apart from the Guard, she’s an intensive care nurse and trauma program manager at Manchester’s Elliot Hospital. She left maternity leave in September to join her colleagues at the hospital in the thick of the pandemic.

She says it’s encouraging to be on the vaccine side of things.

“I spent the better half of last year with colleagues, watching Covid patients come through and seeing how their family and friends are suffering. It’s nice to be on the other side of this … and prevent patients from getting it in the first place,” Whelan told CNN Wednesday.

Maryland, too, is having its National Guard administer shots and give logistical support. This week it’s sending teams to help local health departments with their clinics, according to Maryland Gov. Larry Hogan.

Some are training others to administer the shots

Guard medics started training the volunteers on Monday. Two days later, some of the volunteers were already giving shots at a vaccination center in Maricopa County, according to the Arizona National Guard.

“This is a monumental call to service that requires a whole-of-communuity approach to accomplish,” Maj. Gen. Michael T. McGuire, director of the Arizona Department of Emergency and Military Affairs, said of the volunteers.

Others are answering phone calls and helping with tests

In New York, Guard members are helping at 15 drive-through Covid-19 testing sites, putting together test kits. They are also screening passengers at 12 airports across the state, the Guard says.

It also created and ran field hospitals like the one at Manhattan’s Javits Convention Center, where the Guard says more than 1,000 coronavirus patients were treated.

In New Hampshire, besides the more than 100 members working at the vaccination sites, some 300 others are working on other virus-related tasks, including helping to operate a state call center, fielding questions like where to get tested or vaccinated.

Since April, it also has been operating a warehouse for personal protective equipment and distributing that equipment to hospitals, businesses, schools and polling sites across the state.

The pandemic activations are “unprecedented” for the New Hampshire National Guard, both for the variety and duration of the missions, he says.

“We’ve never seen anything like this in our modern history for noncombat-related activation,” Heilshorn said.

Some are helping to protect against civil unrest

Thousands of Guard members also have been called this week to guard against civil unrest, most of them in Washington DC.

Initially, those few hundred Guard members were meant to focus mainly on crowd management and traffic control at Metro subway stations and a few dozen other locations, officials said.

But after the riot at the Capitol, more were being called in — from DC, New York, New Jersey, Maryland, Virginia, Delaware and Pennsylvania — bringing the total to about 6,200, a US defense official said Thursday.

In Wisconsin, Gov. Tony Evers mobilized 500 Wisconsin National Guard troops this week, at the request of local officials, ahead of prosecutors’ announcement in the Blake case.

The Guard members were to “be on hand to support local first responders, ensure Kenoshans are able to assemble safely, and to protect critical infrastructure as necessary,” Evers said Monday.

In Georgia, Gov. Brian Kemp said Wednesday he’ll extend an order, first issued in the summer, keeping the National Guard activated so that he can call on it to protect the state Capitol building and other state buildings if needed.

Kemp put the Guard on alert in July after violent clashes between law enforcement and demonstrators in Atlanta during protests against police brutality.

Correction: A previous version of this story incorrectly spelled the last name of Maj. Lindsey Whelan and misstated her title. Whelan is the chief nurse of the New Hampshire Air National Guard.