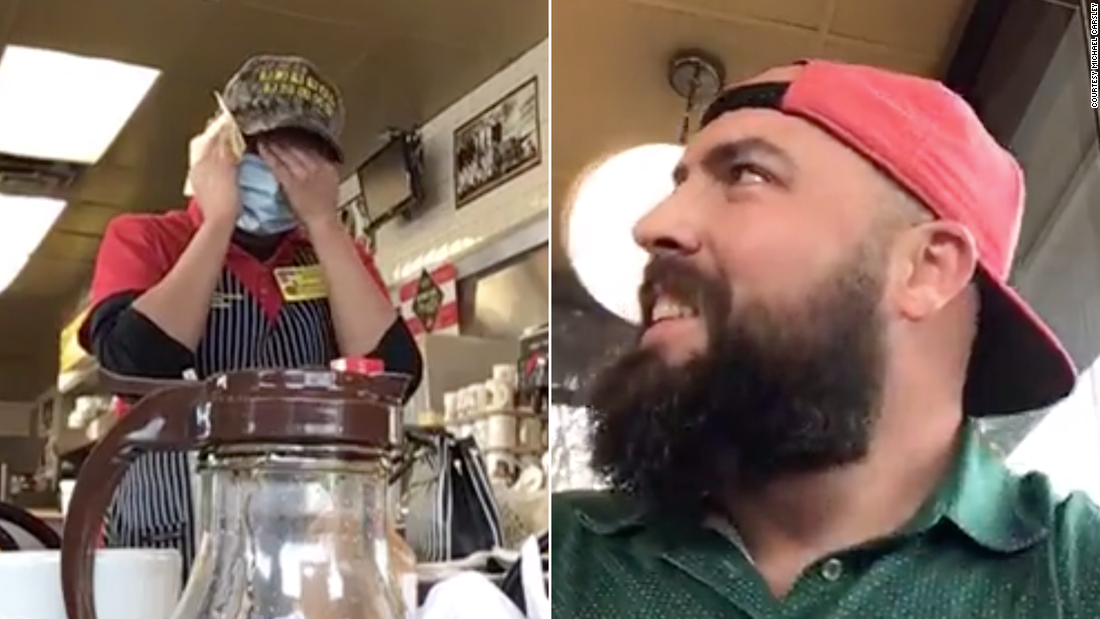 Their rule: Whoever ended that season at the bottom of the league had to spend 24 hours in a Waffle House. For every waffle eaten, one hour would be removed from the total time.

While attempting to finish off as many waffles as he could on January 3, Carsley also found a way to turn the punishment into a reward.

The challenge endured, which was livestreamed among his friends, led to donations collected for his Waffle House server. At the end, she received more than $1,000.

“I would do it again,” Carsley told CNN in an interview. “The punishment was absolutely horrible, but it was more worth it than anything.”

Carsley, a 32-year-old salesman at Parsons Roofing just north of Atlanta, is part of a fervent group of 12 fantasy football players.

After finishing in last place, Carsley alerted his Facebook friends to his impending eating challenge.

He heard from those wanting to help with the tab, which he thought “was kind of silly for people to be throwing money at me for a waffle.”

Instead, he felt it would be better donated to servers who have struggled with fewer customers during the Covid-19 pandemic. He posted his Venmo account name and offered for friends to chip in.

A few volunteered to sit with him as he went through the challenge, including league member “degenerates” Mike Reich and Brett Hessler, who joined him for the duration.

Carsley strategized that if he were able to eat 21 waffles, the adventure would end in a tidy three hours. He could have spaced out the challenge over a longer period, he said, but he had no desire to spend the entire day there.

Having never eaten that much food in one sitting, however, he soon discovered what that would entail.

Mosammat Shumi, a server at Waffle House for 11 years, arrived to work that Sunday morning like any other. She’s a constant fixture on the early shift, taking care of new patrons and regulars alike.

Waffle House, the chain of 24-hour diners beloved throughout the Southeast and Midwest, is known for its busy weekend breakfast rushes.

That Sunday was no exception, even during the pandemic. Plexiglass dividers stretch to the ceiling to separate each booth and masks are worn whenever someone leaves their table.

As Shumi approached Carsley and his friends, she quickly became aware their table would be different.

In an interview with CNN, Shumi remembered being surprised when learning of their day ahead.

Carsley wanted to assure Shumi that he would not be filling the booth all day wasting their time, telling her they would take care of her at the end of the challenge.

Carsley commenced with a set of seven waffles, which he polished off in less than 30 minutes. No syrups or condiments were added to his waffles, he said, to make room in his stomach for the rest.

His Facebook livestream captured the entire ordeal, witnessed remotely among his friends. As he ordered a second set of seven waffles, viewership was climbing into the dozens. Alerts from his Venmo account lit up as the pool of money grew.

The donations ranged from a couple dollars to double-digit amounts, piling on in a similar fashion to the waffle stacks in front of him.

The task itself of eating the waffles soon struck Carsley. He hit the proverbial wall halfway through his ninth waffle.

“All hope, all hope faded,” he said. “My confidence going in was at an all-time high, and after my first seven I had zero hope.”

The livestream video shows the agony on his face with each bite, as everyone online and at the table realizes that his ambitious 21-waffle mark would be next to impossible to accomplish.

Carsley’s pace crawled to a standstill. He ultimately finished the second set of waffles after close to a painful four hours. Viewers and those in the booth discussed whether it was worth creating an alternate bet and calling the waffle challenge off.

And yes, unlike more infamous eating challenges, he was allowed to use the restroom.

“I felt bad for him,” Shumi said. When she realized he wasn’t joking about the volume of food he planned to eat, she wished she “could have made him some thin waffles” earlier.

Yet with the time elapsed lowering the sum of waffles he needed to consume, and with the finish line in sight, Carsley rallied.

“From there it was just, let’s get this done with,” he said.

Word of the challenge soon spread around the diner, and Carsley said other customers were finding out about the donation drive, leaving larger tips themselves.

“A lot of people started paying it forward after seeing what we were doing.”

“It was the single most miserable thing I’ve ever put my body through,” he said.

“I love waffles, especially from Waffle House, but I don’t know if I’ll consume another waffle again,” he added.

In a subdued celebration, the hurdle was finally cleared. The final score: 18 waffles consumed. Nearly six hours of time. A $49 tab.

And most importantly, unbeknown to Shumi, over 90 donations totaling $1,040.

In the livestream video, Carsley holds up the tip amount for his friends to see. He signs the slip and hands it to Shumi, who said, “Oh my God! Really? Are you for real?”

They thanked each other profusely, as Carsley told her, “We wanted to do something impactful for somebody today.”

Overcome with emotion, hands to her face, she says, “I cannot believe it! Thank you!”

Carsley told CNN the moment for him was “remarkably touching,” and said, “It was priceless. One of the better feelings I’ve ever had.”

Days later, the appreciation and disbelief in Shumi’s voice matched what was heard on the livestream. “I’m still in shock, I talked to my family, to everybody.”

She talked about how difficult last year had been, and this has given her relief that things are beginning to turn around for her.

Shumi has yet to receive the tip, she said, as it is being processed and verified by Waffle House. However, she has already made plans for her four-figure gratuity.

She spoke warmly about her mother and family in Bangladesh, whom she hasn’t seen in three years. Her airfare, much like the proper way to order hash browns with cheese, is now covered.

“Once in a lifetime,” Shumi said, the smile underneath her mask still apparent. “I don’t how to explain it. There is so much happiness.”

As for the next fantasy football season and avoiding a repeat performance, Carsley laughed when ruminating about what initially got him into trouble, staying loyal to his hometown team when selecting players.

“If you are in a fantasy league,” he said, “steer clear of drafting anybody from the Falcons.”

Inauguration: Trump would be only 4th president to boycott successor’s installation