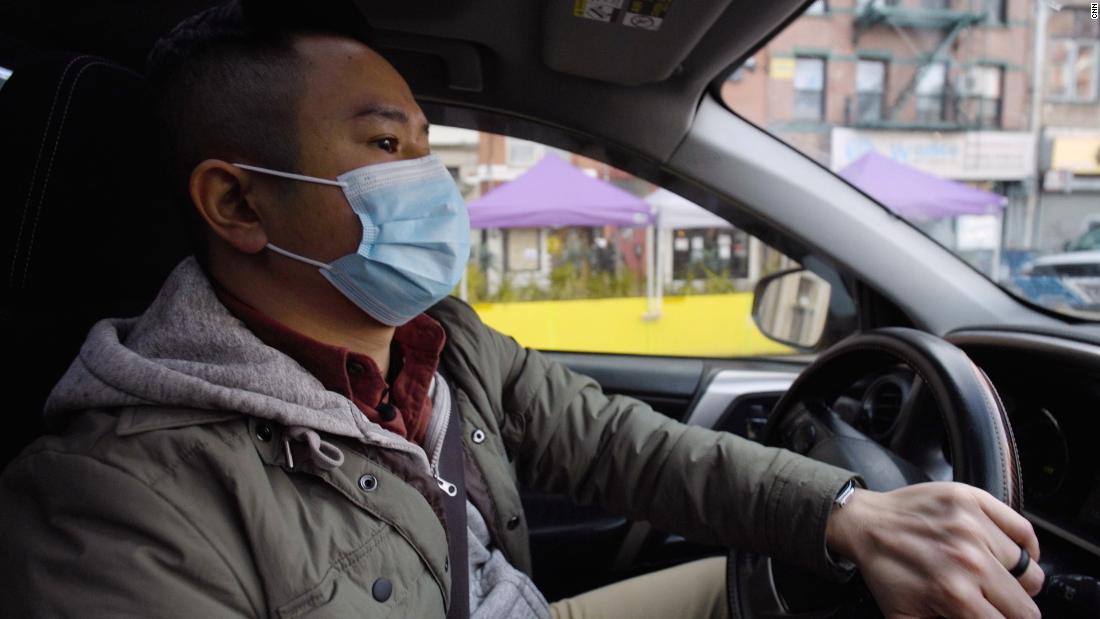 “It’s a ghost town,” Tang remarks, as he drives through Chinatown.

Wain Chin, who has been driving a yellow cab since 1992, hasn’t worked since the pandemic hit New York. He says that the possibility of getting a few customers doesn’t warrant the risk of catching Covid-19 and potentially transmitting the disease to his wife and three kids.

On top of low ridership, many drivers stopped driving altogether for fear of catching the virus themselves.

“Drivers have been among the earliest people to be exposed to Covid,” says Bhairavi Desai, Executive Director of the New York Taxi Workers Alliance (NYTWA). “We’ve lost so many drivers.”

For many of those who stopped driving, federal unemployment checks became the only source of income. When those ran out over the summer, some drivers, like Tang, had no option but to return to driving a taxi. At 36 years old, he thinks he’s less at risk of catching to the virus, yet the anxiety is there. In December, Tang says a driver who frequented the same Chinatown taxi stand as him died from complications of Covid-19.

An industry’s history of tragedy

For Desai and other members of the NYTWA, tragedy in the industry is all too familiar.

Traditionally, taxis in big cities require medallions — official licenses that allow yellow cabs exclusivity to pick up street hails. New medallions are either sold by the city or, more commonly, bought through auctions.

In 2018, nine for-hire drivers in New York died by suicide, crushed under the financial pressure of debts owed on their medallions. Three of them were yellow cab owner-drivers.

Kenny Chow, a 56-year-old yellow cab owner-driver, was among the casualties. His older brother, Richard Chow, is tormented by the memory of losing Kenny.

“I told him to fight the bankruptcy,” Chow says. “I didn’t know he’d make that decision. Very heartbreaking.”

Immigrants helping each other

The Chow brothers were close friends with Chin, connecting over their shared Burmese heritage and navigating the complexities of immigrant life together.

In an industry largely made up of immigrant workers, where language can be a barrier, going through medallion leasing documents can be a challenge. Chin often sits with new drivers to ensure they fully understand the documents they are signing and not fall into a debt trap.

A report in June 2020 found that immigrants in New York bared the brunt of the pandemic, with some organizations claiming that 75% of their clients were going hungry. Chow agrees, saying that he has no option but to buy cheap, sometimes expired food. Through the pandemic, he’s relied increasingly more on colleagues and the union for emotional support.

Since Kenny’s passing, Chin and Richard speak to each other every day, and often visit Carl Schurz Park on Manhattan’s Upper East Side, the site where Kenny took his own life.

They lean on the railing looking over the East River and take a moment of silence. Richard prays that other drivers don’t suffer the same fate as his brother.

Tang acquired his father’s $530,000 medallion debt after his death, and today pays over $2,800 a month to his asset management firm, despite only being able to pick up a few passengers per shift.

When ride-sharing platforms such as Uber and Lyft entered the market in the early 2010s, the value of a taxi medallion plummeted.

“For thousands of owner-drivers, medallions have been their access point to middle-class steady life,” says Desai, especially for immigrants. For many, that dream will never become a reality.

In 2013, yellow cabs made nearly half a million trips a day. In 2020, that number dropped to 50 – 60 thousand. But the yellow cab industry was already hemorrhaging trips pre-pandemic.

As unregulated vehicles for hire flooded the streets, investment-backed platforms such as Uber and Lyft undercut fares, able to absorb the loss. As riders flocked to these cheaper and more accessible taxis, yellow cabdrivers were left in the dust.

Attempts to catch up have been largely unsuccessful. A number of yellow cab ride-hailing apps have emerged in the past few years but have not been able to recapture customers.

In response, the NYTWA has organized numerous demonstrations across New York in the hopes that legislation supporting the yellow cab industry will be passed. In September, hundreds of yellow cabdrivers halted traffic on the Brooklyn Bridge, asking for debt forgiveness. Tang, Chow, and Chin have all been active in demonstrations with the NYTWA.

Protests culminated in a motorcade that traveled from New York to Washington, DC, picking up yellow cabdrivers from Maryland and Philadelphia. They parked themselves outside Capitol Hill, demanding that Congress pass the stimulus bill.

“We have people playing politics with our lives,” asserts Tang.

The NYTWA has put forward a proposal to New York City asking it to backstop loans that would be restructured to a maximum of $125,000 per medallion. Drivers would still be responsible for their loan payments and in the event of loan delinquency, the medallion would be repossessed and auctioned off.

The plan will cost $75 million over the course of 20 years for a city that has an annual budget of $92 billion.

New York City’s Comptroller Scott Stringer and New York Attorney General Letitia James have both voiced their support for the NYTWA’s proposal, along with high-profile politicians such as Rep. Alexandria Ocasio-Cortez and Sen. Bernie Sanders.

Desai says that pre-pandemic, yellow cabdrivers were pretty close to victory. As Covid-19 swept the city and nation, attention shifted away from the plight of taxi drivers. However, Desai and other drivers are optimistic that they will finally get the legislative support they need.

“Through the quarantine, we’ve built a real sense of community,” Desai insists. She notes that union membership actually grew in 2020.

For Tang, unity is essential to victory. Despite being decades apart in age, he refers to Chin and Chow as his brothers. He first befriended them at Kenny Chow’s vigil in 2018 and since then, their bond has only strengthened.

“I do believe that there’s a light at the end of the tunnel, and I really do think that we can make changes when we get enough people together,” says Tang.