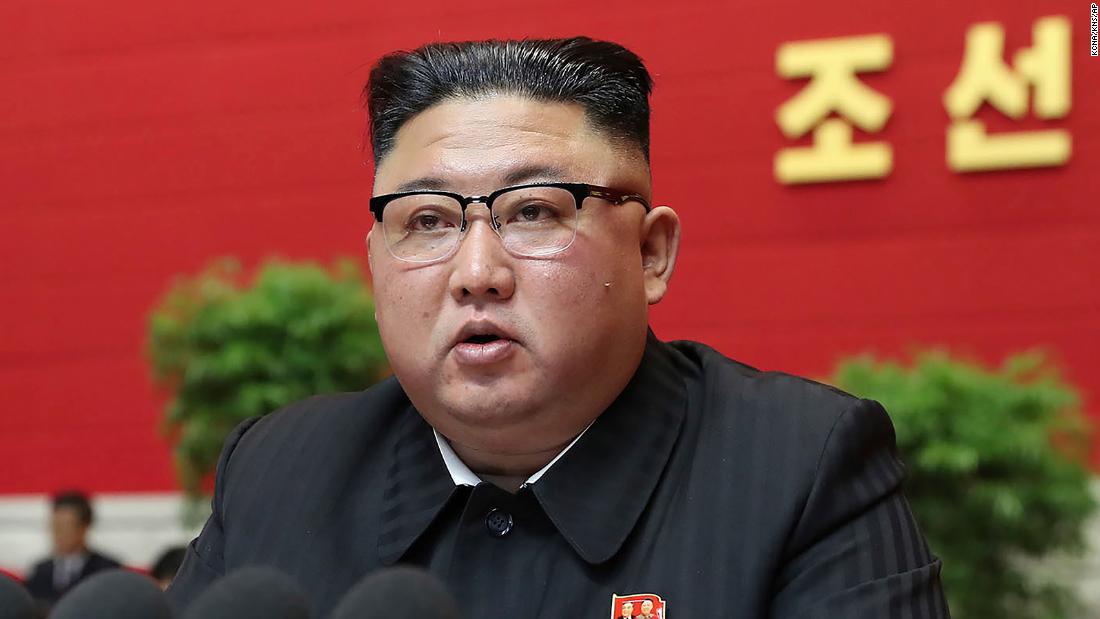 In comments published Saturday, Kim said North Korea is pushing ahead with the armaments to deter the United States, comments that appear to show President Donald Trump’s strategy of high-level engagement with Pyongyang — including three historic in-person meetings between Trump and Kim — failed to convince Pyongyang to stop its pursuit of a modern nuclear arsenal.

“No matter who is in power in the US, the true nature and the true spirit of the anti-North Korea policy will never change,” Kim said, according to the country’s state-run Korean Central News Agency (KCNA).
“The development of nuclear weapons be pushed forward without interruption.”

The projects, according to Kim, are at various stages of development. He said “multiple-warhead guidance technology” is in the final stage, while studies in hypersonic flight that could be applied to new ballistic missiles “are complete,” with North Korea “making preparations for their test and production” — a possible sign that Pyongyang may be on the verge of resuming the type of missile testing anathema to Washington and Seoul.

Improvements in tactical nuclear weapons — which are meant to be used at shorter range and are often less destructive than strategic nuclear weapons — are also being finalized, Kim said. Nuclear-powered submarine research appears to be the least far along. Research into these subs is complete and in “the final stages of examination,” Kim said.

Experts say the Kim regime has long sought these technologies to enhance the quality and durability of its nuclear weapons. A nuclear-powered submarine would be particularly useful from a deterrence perspective because it would enhance North Korea’s “second-strike” capability — the ability to survive an initial nuclear attack from an adversary and respond in kind.

In July 2019, KCNA released photographs of Kim inspecting a submarine under construction. At the time, the United States believed the images likely showed a refurbished submarine that Washington had been aware of for more than a year, according to a senior US official. And satellite imagery from September of that year showed that Pyongyang may have been preparing to deploy a submarine capable of firing missiles.
However, it’s unlikely North Korea will be able to actually field such a submarine any time soon. Though North Korea has successfully test-fired submarine-launched ballistic missiles and is believed to boast a fleet of about 70 submarines, experts say most of the subs are likely old, loud and unable to fire nuclear-armed ballsitic missiles.

“I would not anticipate even a prototype naval nuclear reactor in North Korea, but their interest in the technology is unsurprising,” said Ankit Panda, a senior fellow at the Carnegie Endowment for International Peace and an expert in North Korea’s nuclear program.

Panda said Kim’s interest in tactical or low-yield nuclear weapons made sense, even though they can be “very inefficient in their use of fissile material,” which isn’t easy for North Korea to get.

“North Korea’s interest in these weapons isn’t surprising from a strategic point of view — in fact, it augments Kim’s preferred nuclear strategy quite well,” said Panda, author of “Kim Jong Un and the Bomb: Survival and Deterrence in North Korea.”

Panda said North Korea likely wants these tactical nuclear weapons to combat a potential conventional domestic invasion. That way, Kim could keep his strategic, longer-range nuclear weapons “for retaliation against the US and civilian centers in Japan and South Korea if the US and allies press on after that initial nuclear use.”

“Kim’s interest in tactical nuclear weapons is much like that of Pakistan’s: use them early to degrade mobilization by a conventionally superior neighbor,” he said.

Kim’s comments were delivered to the country’s top political leaders, who are gathered in Pyongyang for the Eighth Workers’ Party Congress — a high-level meeting in which the country’s rulers gather to reflect on successes and failures in years past and set an agenda for the future. These meetings are typically held every five years or so, but Kim’s father and predecessor — Kim Jong Il — stopped holding them after 1980. Kim Jong Un revived them in 2016.

North Korea’s fledgling economy is likely the most important topic on the domestic agenda. Kim admitted in August that his economic plans devised at the Seventh Workers’ Party had failed, and vowed to do better. However, sanctions, natural disasters and the Covid-19 pandemic have pushed the North Korean economy into a freefall, and experts are unsure how things can improve without major reforms.

Kim’s plans for developing his nuclear arsenal and modernizing his conventional arsenal comprised most of the address. He pledged that North Korea would be a responsible nuclear power committed to a “no first use policy of nuclear weapons.

“As a responsible nuclear power, North Korea will not abuse nuclear weapons unless invasive hostile forces try to use it against it,” Kim said.

While Kim said the continued buildup of nuclear and conventional weaponry did not “exclude diplomacy,” he cautioned adversaries against any “attempts to violate the country’s highest interests and dignity.”

The comments targeting the United States are the first from Kim publicly directed at President-elect Joe Biden, and indicate that Pyongyang might not be eager to engage in negotiations in the first days of the new administration.

Kim said the key to establishing a new North Korea-United States relationship requires the US to end its “policy of hostility” towards Pyongyang, which North Korea often defines as Washington’s alliance with South Korea, its commitment to protect South Korea under the US “nuclear umbrella,” and US force deployments in East Asia.

Biden, however, has made it clear that his foreign policy strategy will involve strengthening ties with allies that felt abandoned by Trump, who viewed the partnerships as transactional in nature.

South Korea’s Unification Ministry said Seoul would not alter its policies toward denuclearization or inter-Korean peace in response to Kim’s comments.

“South Korea hopes the talks between North Korea and the United States can resume as soon as possible as the start of a new administration,” the ministry said in a statement.

But the Biden administration may be forced to deal with this sooner than it would like, as North Korea conducted provocative missile tests during the first 100 days of both the Trump and Obama administrations.

Though Kim has not said similar weapons tests are on the table, he indicated a year ago that he no longer feels “bound” by agreements with Trump to halt nuclear weapons and long-range missile testing — and Kim likely needs to test any of the new armaments in development before declaring them battle ready.