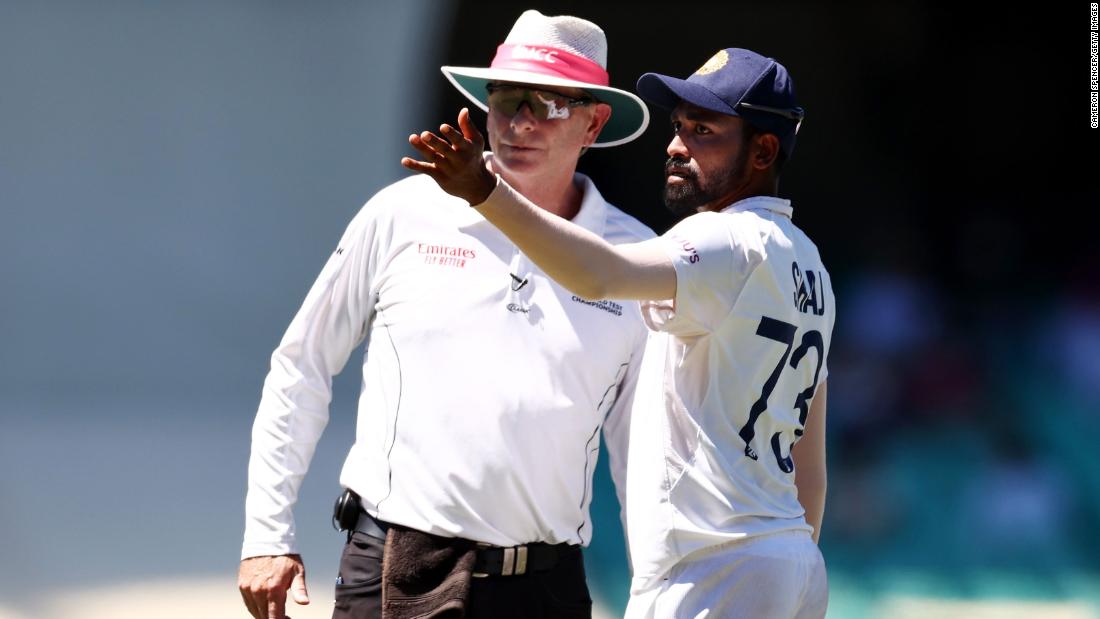 The Indian team lodged an official complaint after bowlers Jasprit Bumrah and Mohammed Siraj complained of hearing racist slurs while fielding near the boundary rope on Saturday, the third day of the match, Reuters reported.

“Cricket Australia (CA) asked NSW Police and security staff to remove a group from the crowd.” said New South Wales Police in a statement sent to CNN Sport on Sunday. “Inquiries are continuing.”

The Indian cricket board did not immediately respond to CNN’s request for comment.

In a statement on its website, the ICC said under its anti-discrimination policy, CA is required to investigate the incident and provide a report to the sport’s governing body on the incident and “any action taken to ensure the issue has been dealt with appropriately.”

“There is no place for discrimination in our sport and we are incredibly disappointed that a small minority of fans may think that this abhorrent behaviour is acceptable,” said ICC chief executive Manu Sawhney.

“The Indian cricket team had apprised ICC Match Referee David Boon of alleged racial abuse at the end of the third day’s play. Match and stadium officials were alert on the fourth day and as such play was halted and six people were evicted following another incident just before tea,” added the ICC statement.

“The abuse of cricketers by crowd members is not acceptable,” said Sean Carroll, CA’s head of integrity and security. “We thank the Indian team for their vigilance in reporting today’s incident, which we are now in the process of investigating.

“It is most regrettable that an otherwise excellent Test match contested in tremendous spirit by two friendly rivals has been tarnished by the actions of a small number of spectators over the past two days.

“As hosts, we once again apologise to the Indian team.”

India bowler Ravichandran Ashwin told reporters this was his fourth tour to Australia and said his team had some “nasty” experiences while playing in Sydney in an interview posted on the Indian cricket board’s website.

“Especially in the lower tier of the stands they have been hurling abuses but this is a time where they have gone one step ahead and used racial abuses,” said Ashwin.

“It’s definitely not acceptable in this day and age and it must be dealt with an iron fist to make sure it doesn’t happen again.”

In a tweet, India captain Virat Kohli wrote that “having gone through many incidents of really pathetic things said on the boundary lines, this is the absolute peak of rowdy behaviour.”
Visit CNN.com/sport for more news, features, and videos

The boundary is the closest part of a cricket pitch to the crowd.

Kohli added: “The incident needs to be looked at with absolute urgency and seriousness and strict action against the offenders should set things straight for once.”
Approximately 10,000 fans — around a quarter of the Sydney Cricket Ground’s capacity — are allowed to attend each day of the Test due to coronavirus concerns.

Future first dog Major Biden, adopted from a shelter, to get virtual ‘indoguration’