Congress’ impeachment plans: What could happen this week 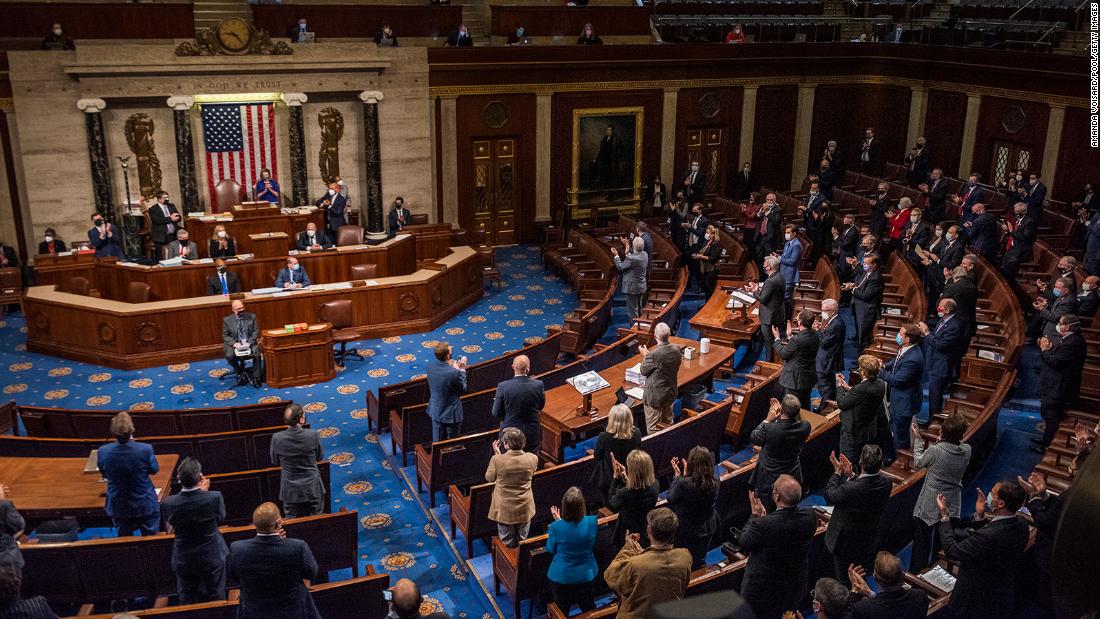 As members and aides watch new footage of the mob tearing through the US Capitol and as more stories emerge about what happened inside the halls where they work, the calls for accountability — no matter the political cost to the incoming President Joe Biden — have grown. People are dead. Security is shaken. No one who watches what happened or lived through it Wednesday feels like Democracy is out of the woods yet. Four days ago, no one imagined the House would be on track to impeach President Donald Trump for a second time.

The bottom line: If there is an off ramp for moving ahead with impeachment, it’s not clear what that is of Monday morning.

There are 214 original co-sponsors on the articles of impeachment right now, according to aides. It only takes 217 votes to pass. In other words, the momentum is there. The genie is out of the bottle. Members don’t need an investigation or hearings to know what happened Wednesday. They lived through it. Aides are confident that while there are no Republicans who have signed onto the bill, a handful of them will vote for it when it comes to the floor. If impeachment is going to be a distraction for Biden, if it further divides the country, there is no indication that is enough to stop House Democrats, at least for now.

What to watch Monday

In her letter to members on Sunday night, House Speaker Nancy Pelosi gave the vice president one last chance to invoke the 25th Amendment over the next 24 hours to remove the President. If Pence doesn’t exercise that power or promise to invoke it within the next day, Pelosi pledged that impeachment would be the way forward.

We expect that the House to be poised to vote on the impeachment article by Wednesday or Thursday, following a possible full House vote on a resolution urging Pence to invoke the 25th Amendment. The exact timing is subject to change based on developments. Pelosi holds a call with her caucus Monday at 2 p.m. ET.

Also Monday, House Minority Leader Kevin McCarthy holds a call with his members at 4:30 p.m. ET. It may be a first indication of how McCarthy — who got into a heated exchange with the President on Wednesday — is thinking about the final days of Trump’s presidency.

McCarthy — a California Republican who voted in support of the electoral objections even after the insurrection Wednesday — has faced backlash from donors and even some members for his relationship with Trump. Still, McCarthy is leading a conference that is still loyal to the President. How McCarthy strikes the balance between what donors want right now and what his conference wants is something to keep an eye on. Pay attention to the fact that major Wall Street companies and other corporate entities have announced in the last several days they are pausing political donations and reviewing giving for anyone who voted against certifying the results of the election.

The backstory of how this all came together

On Wednesday afternoon, when the Cannon Office building was evacuated, Democratic Rep. Ted Lieu of California and a staffer were wandering around Longworth House Office Building trying to figure out how to get away from the masses of people circulating the halls amid coronavirus. They ended up in Rayburn House Office Building in Rep. David Cicilline’s office. While there, Cicilline, a Democrat from Rhode Island, and Lieu began talking about what was unfolding before their eyes. Huddled together in the office, the staffers were getting reports from others who were inside the Capitol. One of those reports came from a staffer who worked for Democratic Rep. Jamie Raskin of Maryland who was literally with Raskin’s family as the Capitol was under siege.

Lieu and Cicilline decided as the event was unfolding that if Trump’s actions that day were not impeachable, nothing ever would be. They began working on the draft while the Capitol was still under attack. By evening, they’d begun sending drafts to the House Judiciary Committee and Raskin had gotten involved.

What about the Senate?

Senate Democrats held a two-hour caucus call Sunday to have an open, frank and family discussion about how to handle the House’s impeachment. One person familiar with the call told CNN that nothing has been decided at this point and there is a range of options on the table, including everything from having the House leadership wait 100 days to send over the articles to holding a one-day trial in the early hours of Biden’s presidency.

No matter what route the Senate takes, it is becoming abundantly clear that if the House goes through with this, there are no good options for the Senate and for the incoming Biden administration.

One thing is clear: This will be Senate Democratic leader Chuck Schumer’s issue to handle.

In his memo to members Friday, Senate Majority Leader Mitch McConnell made it abundantly clear that he won’t be bringing the Senate back to hold an impeachment trial and the Senate does not return until January 19. The Senate stands in recess and Senate floor experts to whom CNN has spoken over the last several days don’t believe the House could present articles of impeachment during a pro-forma session.

That means that the earliest the Senate could begin a trial would be the afternoon Biden was inaugurated. Remember, once the articles of impeachment are presented to the Senate, the chamber must begin an impeachment trial at 1 p.m. ET the following day unless senators strike another agreement. In order to get that agreement they must have the buy in of all 100 senators. That means that Trump will no longer be the President if and when the Senate begins consideration of impeachment.

In upcoming days, keep your eyes on what a group of Republicans says about the process to impeach Trump. Democrats in the House want this process to be bipartisan. They are confident that they can get two to four GOP votes, but if they could get more than a dozen, it has a multiplying effect for how GOP senators might look at this process. Already, GOP Sens. Ben Sasse of Nebraska, Pat Toomey of Pennsylvania, Lisa Murkowski of Alaska and Mitt Romney of Utah have signaled they are tired of Trump and want to see him go. They might be willing to vote for impeachment. But, if only a handful of House Republicans vote yes, the momentum for the Senate diminishes significantly.

One more thing to keep your eye on: There is talk about whether section 3 of the 14th Amendment might apply to Trump. It’s not clear at all how members would enforce it or what it could mean for their impeachment efforts, but the 14th Amendment essentially says that if you are involved in an insurrection against your government, you cannot hold federal office. Again, it’s not clear how you enforce it, but keep it in mind.

This post has been updated with additional developments Monday.

CongressCongress' impeachment plans: What could happen this week - CNNPoliticshappenimpeachmentplansPoliticsweek
0
Share