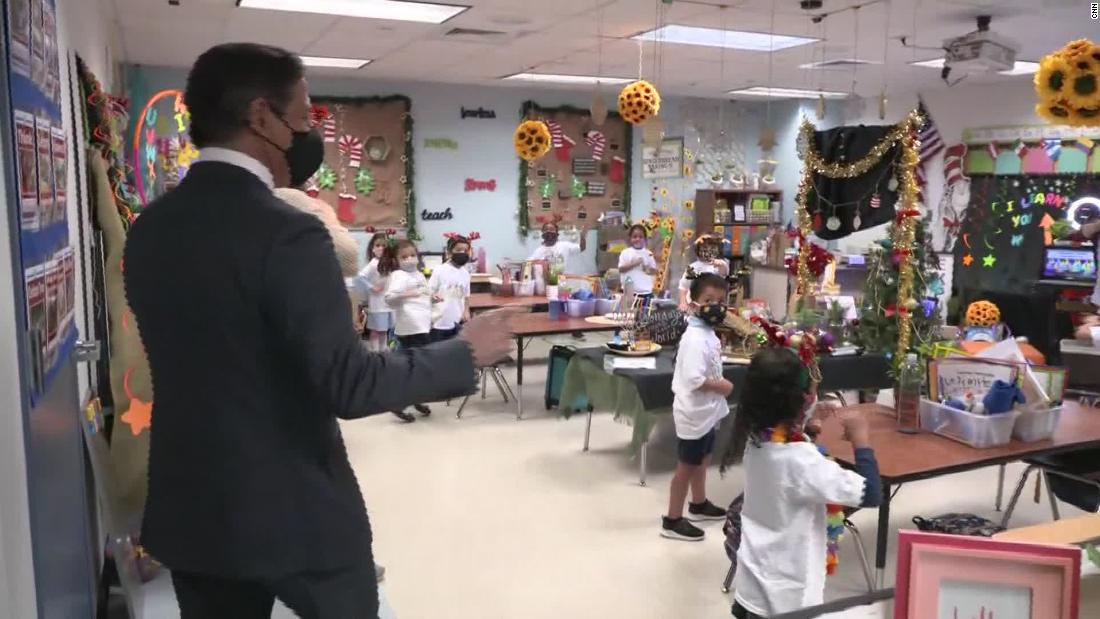 The head of Miami-Dade County Public Schools said he’s been able to rely on the advice of scientific experts and follow through on a plan that has worked and gained trust.

“We’ve been well-informed by public health and medical experts. We convened a task force of experts, in pediatric medicine, in immunology,” he told CNN, adding that one of the experts is Dr. Vivek Murthy, whom President-elect Joe Biden has nominated for US Surgeon General.

“We’ve been in good hands … and that has translated into a set of protocols that has left very little room for doubting ourselves.”

Those protocols listed in the county website include: daily health checks before students leave home, the wearing of masks and more space around children on school buses and in classrooms and cafeteria.

Carvalho’s lack of doubt has helped win over many parents of the more than 350,000 students enrolled in his schools.

“When you communicate that to the parents, then there’s a sense of calm and trust that parents need prior to sending their students to school,” he said.

Miami-Dade is the fourth largest school district in the country and the largest to reopen fully in the fall.

Carvalho’s determination stems from his belief that there is no good replacement for in-person instruction.

“There is no substitute, regardless of how great the technology may be,” he said bluntly. “You cannot Zoom effectively into a full understanding, a full level of engagement for students.”

Carvalho also sees schools as an indispensable safe harbor for children — academically, physically and emotionally — even or perhaps especially in the middle of a pandemic.

He said the cases of coronavirus in his schools are lower than in the community at large. Miami-Dade alone has reported more than a fifth of all Covid-19 cases in Florida, according to Johns Hopkins University data. But Carvalho said schools had an advantage.

“Here in Miami-Dade, we see a greater adherence to protocols in schools — because it is a controlled, safe environment — than we see those same protocols being followed in their community in general, whether we’re talking about the bars and restaurants at the beach or social gatherings,” he said.

A mixed picture of openings and closings

New York City is seeing a similar outcome after it reopened its public elementary schools last month, despite an increasing coronavirus test positivity rate in the city as a whole.

The city has conducted about 100,000 Covid tests in schools, and found a positivity rate of 0.68%, far below the citywide rate of just under 9%, according to New York City data.

The evidence that schools are not hotbeds of virus spread led New York Gov. Andrew Cuomo to reverse a policy requiring schools to close if the community positivity rate hit 9% or higher.

“If their schools are below the level of positivity in the community then they can keep the schools open,” he said last week, returning more control to local school districts.

While there is no official national database tracking the spread of Covid within schools, independent analysis suggests that schools can safely reopen if proper mitigation strategies are followed.

It’s an issue on which even governors from political opposites can share similar views.

Last week Cuomo, a Democrat and frequent critic of President Donald Trump, said: “The safest place in New York City is, of course, our public schools.”

And last October, Florida Gov. Ron DeSantis, a Republican ally of the President, said: “Closing schools due to coronavirus is probably the biggest public health blunder in modern American history.”

But many school districts are not ready to reopen. Los Angeles, the second largest district behind New York City, remains fully online, as do San Francisco and Washington, DC.

On Monday, some Chicago students in pre-K and special education got to return to school for the first time since March. But the push to reopen schools was met with heavy resistance from the city’s teachers’ union, which argued that the city had not invested enough in measures to make in-person learning safe for staff and children.

That also appears to be the feeling among many Chicago parents. Students in kindergarten through 8th grade may go back to in-person learning next month, but so far less than one-third have signed up.

Biden said reopening public schools is one of his priorities for his first 100 days in office.

With Miami-Dade already having met that bar, Carvalho has his own next priority in mind: make sure teachers are among the first to be vaccinated.

“If our teachers are essential professionals, indispensable to our society, to our economy, then we ought to prioritize their status in terms of access to the vaccine,” the superintendent said.

What is the Insurrection Act?