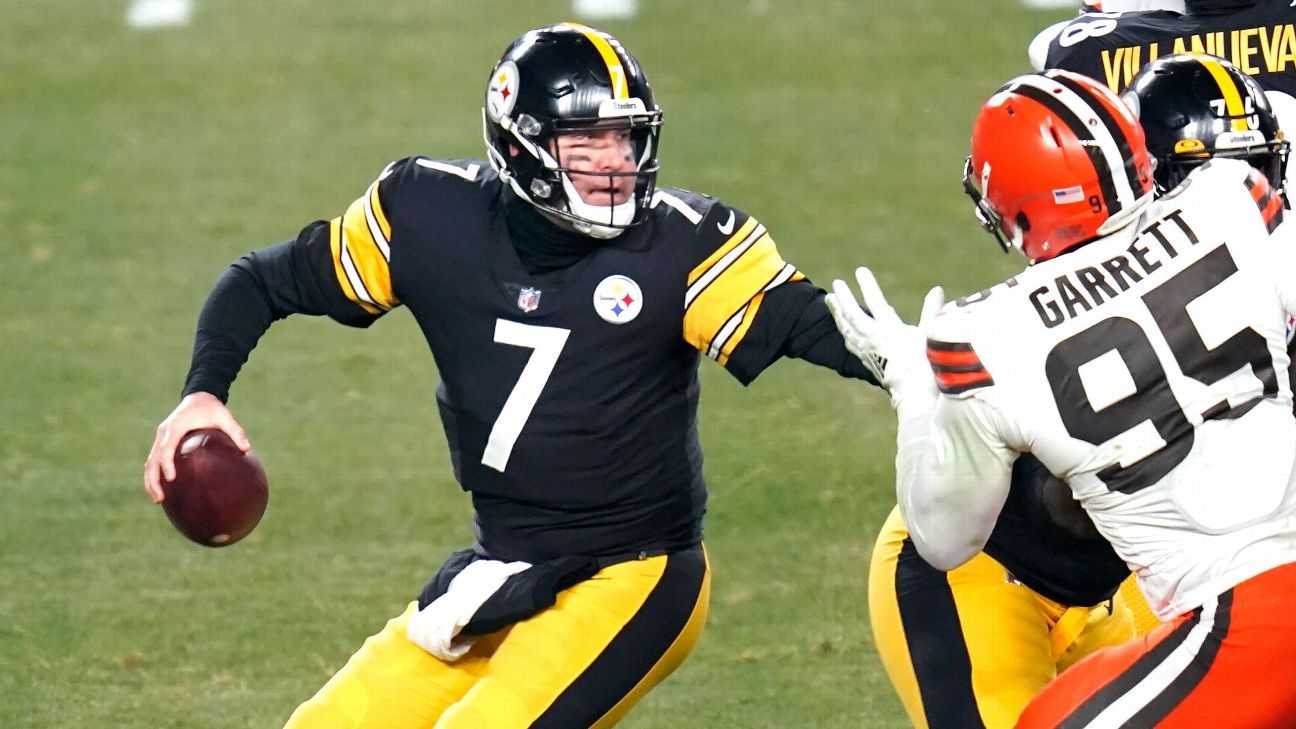 The wild-card round of the 2020 NFL playoffs concluded Sunday, which means six teams have now said goodbye to this NFL season.

The Indianapolis Colts were the first to exit the stage during Saturday’s first round of games, followed later by the Seattle Seahawks and the Washington Football Team. And on Sunday, the Tennessee Titans, Chicago Bears and Pittsburgh Steelers joined the list of teams whose offseasons have officially begun.

The top-seeded Kansas City Chiefs and Green Bay Packers will join the playoff party next week after enjoying first-round byes.

So what’s next for the teams that were eliminated from the playoffs this week? NFL Nation digs in.

How the season finished: The Steelers maintained the best record in the NFL through 11 games with an unblemished start, but the wheels fell off in a three-game stretch as weaknesses with the run game and short passing game were exposed, not to mention the injuries on defense. The Steelers rebounded for a division-clinching, comeback win against the Indianapolis Colts, but a first-round exit out of the playoffs after an 11-0 start is a disappointment — especially with the first-quarter meltdown that led to a 28-0 deficit in Sunday’s wild-card playoff loss to Cleveland. This team had Super Bowl LV aspirations, and anything less than a trip to Tampa, Florida, in the twilight of quarterback Ben Roethlisberger’s career is a failure.

Biggest offseason question: Roethlisberger is committed to playing at least through the end of his contract in 2021, ESPN’s Adam Schefter reported, but what remains to be seen is how much of the current team the Steelers can retain around him. With nearly 20 free agents hitting the market and a $41.2 million salary-cap hit on Roethlisberger’s deal, the Steelers will have to pull off major wizardry to bring back anyone significant — such as versatile defensive backs Mike Hilton and Cam Sutton or wide receiver JuJu Smith-Schuster. — Brooke Pryor

Drew Brees connects with Michael Thomas, who barrels through defenders for an 11-yard touchdown, his first of the season.

How the season finished: Despite starting 5-1, the Bears’ offense spent much of the first 11 games of the 2020 season in hibernation. Quarterback Mitchell Trubisky got benched in Week 3 in favor of Nick Foles, who fared even worse. Trubisky took the job back in late November and played mostly inspired football, but the damage was done. The Bears ignored running back David Montgomery — partly because the offensive line play was so subpar early on — for much of the season until he got on a hot streak to close out the regular season. But failing to establish the run for the first three months of the season hurt Chicago. The Bears backed into the playoffs in Week 17 by virtue of the Los Angeles Rams’ win over the Arizona Cardinals, but Chicago went one-and-done in the postseason. After Sunday’s 21-9 loss at New Orleans, the Bears are 1-7 against playoff teams in 2020. The whole season felt like a wasted opportunity.

Biggest offseason question: The Bears need to determine what organizational changes are necessary despite reaching the playoffs two of three years. A strong argument can be made to retain coach Matt Nagy, but upper management might be a different conversation. General manager Ryan Pace, whose fate is intertwined with Trubisky, has one year left on his contract. The civic cries for team president and CEO Ted Phillips to step aside grow louder each year. The Bears also have a big decision to make at quarterback. Trubisky’s fifth-year option was declined, and Foles looked ineffective. Do the Bears draft another quarterback? Do they re-sign Trubisky (gulp)? Do they find another veteran? The story remains the same in Chicago. — Jeff Dickerson

Lamar Jackson heaves a deep pass to Miles Boykin, but ends up getting picked off by Malcolm Butler.

How the season finished: The major issue for the Titans has been the defense. When a team doesn’t have a stout front end and back end of the defense, the results are typically not good. They signed free agents Jadeveon Clowney and Vic Beasley to shore up the pass rush and take the defense to the next level. But instead, they’ve regressed. The Titans finished with 19 sacks — third worst in the league. Losing Adoree Jackson for 13 games because of a knee injury hurt the secondary severely. Outside of Malcolm Butler, the Titans have especially struggled on third downs, where they’ve allowed an NFL-worst 51.8% conversion rate.

Biggest offseason question: How can the Titans find a way to generate a pass rush? The same issue from last offseason carries over to 2021. The Titans will have limited salary-cap space to add a premier pass-rusher, so they’ll have to bank on signing a player with upside who hasn’t had a breakout season. Tennessee could also turn to the 2021 NFL draft. The offense is too good to have another season wasted away by the issues on defense. The Titans also have to hire a defensive coordinator. — Turron Davenport

Alex Smith says he is going to take some time to decide whether he will return to play for another year.

How the season finished: A variety of things. But, keep in mind, Washington wasn’t expected to be much more than a six- or seven-win team. In a tumultuous year, it won four more games than last season under first-year coach Ron Rivera. Washington won five of its final seven games to win the division. But the offense needed to be more productive. Quarterback was an issue as Dwayne Haskins was ineffective, benched early and eventually released; backup Kyle Allen lasted four games before a broken ankle ended his season and Alex Smith’s strained calf cost him down the stretch. His leadership and comeback story mattered, but the offense sputtered too often and needs more consistent wide receiver play, and playmakers, beyond Terry McLaurin. The defense played well, but needs to start games better. It also allowed too many big plays and was inconsistent against the run; it needs to strengthen the linebacker and safety positions.

Biggest offseason question: Who will be the quarterback in 2021? Washington cut Haskins, and it would be awfully hard to rely on Smith as a starter next season at age 37. Smith was a fantastic story, but can he last 16 games and be effective? The team must consider its options and can save $13.6 million by releasing him. Because the defense is ready to win now, with its talented and youthful front, Washington can’t afford to wait long for a young quarterback to develop. Washington could contend in the NFC East for a while by adding a veteran and perhaps drafting a quarterback in the middle rounds to develop. Rivera said Allen could have done what Smith did in leading the team to a division title. But if they deem Smith as worthy of returning, then it must draft a quarterback who could provide immediate help, if this offense wants to make a jump. And Taylor Heinicke showed that he should be in contention for a roster spot with a 306-yard passing day against the Bucs in the wild-card round. Washington’s inability to develop, and keep, a quarterback has contributed mightily to its poor record under owner Dan Snyder. He can’t be the one leading the charge, as he was when the team acquired Haskins, Robert Griffin III and Donovan McNabb. — John Keim

How the season finished: The Seahawks’ offense hit a wall around midseason and could never break through it. Russell Wilson was throwing touchdowns at a historically prolific rate early on, carrying a defense that was setting records for futility for the first two months. But Wilson & Co. started cooling off right around the time their defense began its turnaround. All of that was still good enough to score the most points in franchise history, win the most games since 2014 and secure their first division title since 2016. But it wasn’t good enough for the NFC’s No. 1 seed, which, as it turns out, the Seahawks would have gotten had they not inexplicably lost to the Giants at home in Week 13. The Seahawks could have used that week off to rest Jamal Adams and avoid the Rams, who held Seattle’s struggling offense to 20 points in the wild-card round and got a key pick-six.

Biggest offseason question: It all centers around Adams: Can the Seahawks get a deal done? If so, how massive will it be? And if not, then what? This season, Adams validated the Seahawks’ bold decision to give up two first-round picks in last summer’s blockbuster trade. He was arguably their most impactful defensive player, setting the sack record for DBs. He brought an attitude their defense was lacking. Adams still has one year remaining on his current deal, and giving up as much as the Seahawks did for Adams leaves no doubt they want him long term. But negotiations could be tricky because he’ll undoubtedly want to be paid like more than just a safety. The NFL’s decreasing salary cap could complicate matters. The Seahawks figured they could get a strong return for Adams this offseason if they weren’t able to get a deal done and had to trade him. They’re without picks in the first and third rounds after giving them up for Adams, so they have incentive to figure out before the draft if he’ll be around long term. — Brady Henderson

How the season finished: It’s hard to say something went wrong when you finish with double-digit victories for just the second time since 2014. But the Colts didn’t give quarterback Philip Rivers a one-year, $25 million contract to simply lead them to the first weekend of the playoffs. Owner Jim Irsay wants to win “multiple Lombardis,” but they haven’t won any since the 2006 season. They had the talent to make the postseason, but the 2020 season proved there was little room for error. And Indianapolis nearly had one error too many. The Colts didn’t qualify for the playoffs until the final week of the regular season when they beat Jacksonville and then got help from Buffalo beating Miami.

Biggest offseason question: Who will be the starting quarterback and left tackle in 2021? After spending the first 16 seasons of his career with the Chargers, Rivers proved critics wrong by showing he could still compete at the highest level. But he’s 39 and has a high school head-coaching job waiting for him in Alabama when he retires. The risk of keeping Rivers — if all sides want that to happen — is his production falling off, which would force the franchise to hunt for a new starter in 2022. Fourth-round pick Jacob Eason spent this season as the team’s third-string quarterback, learning behind Rivers and Jacoby Brissett. It’s unknown if Eason is ready to push for the starting job next season. The Colts could re-sign Brissett, who will be a free agent, or look for a starter via free agency or a trade (Carson Wentz or Matthew Stafford). Starting left tackle Anthony Castonzo will be 33 in August, and he, like Rivers, has not committed to playing beyond this season. Castonzo flirted with retirement last winter. The only player currently on the roster who might be able to fill in is All-Pro left guard Quenton Nelson. — Mike Wells

These international destinations are open to US tourists

The rise of the same-game parlay, America’s new favorite way to bet

The rise of the same-game parlay, America’s new…

Bank of England takes interest rates to highest level since…