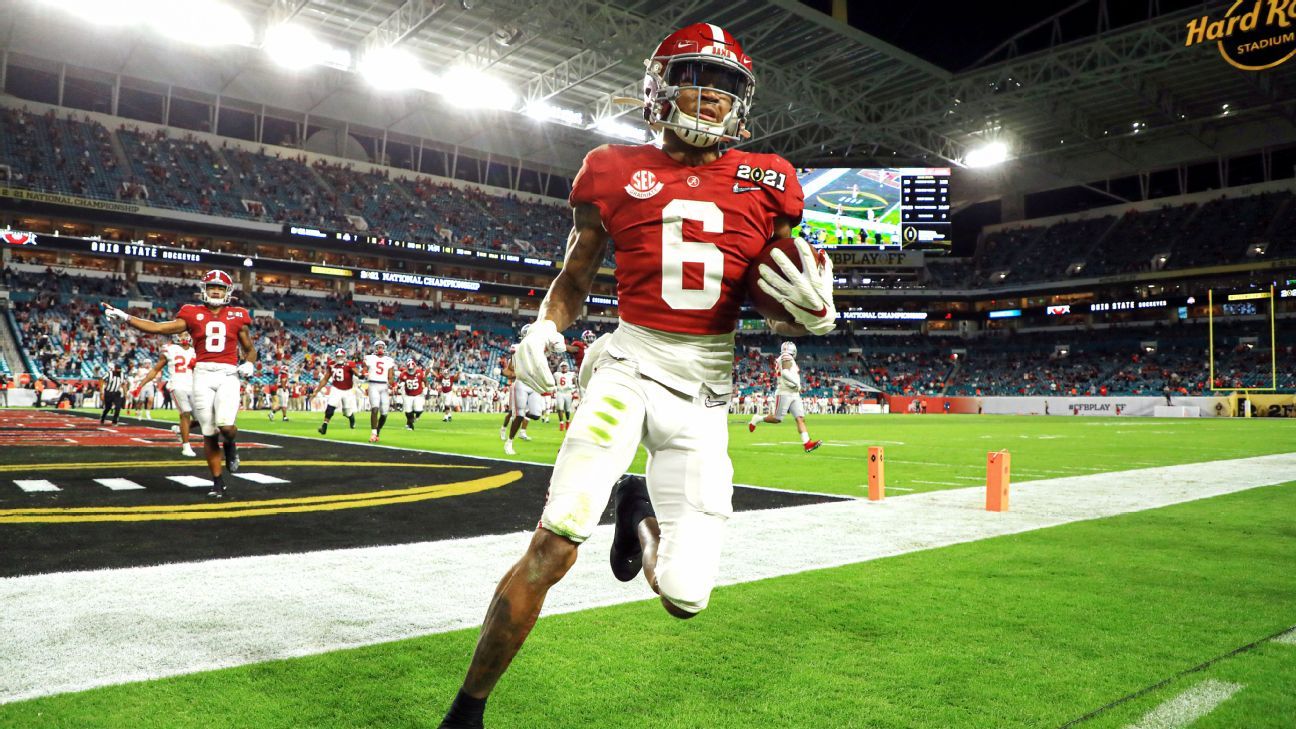 
MIAMI GARDENS, Fla. — At the end of a long, grueling, strange, uncomfortable season for college football, we finally got a small piece of normalcy as the final seconds ticked off the clock Monday night at Hard Rock Stadium in the College Football Playoff: Alabama, hoisting yet another national championship trophy after winning in dominant, historic fashion.

Only a few spectators were left to see the celebration, a small fraction of the roughly 14,000 fans allowed into the facility considering all the restrictions in place. In any other year, the field is mobbed with friends, family, media, photographers and event personnel in a grand celebration that runs 10 deep along the makeshift stage. On Monday night, a solitary player did snow angels in the fallen confetti as teammates hugged only team personnel.

Alabama winning it all felt like the inevitable ending, of course, as the most dominant coach in the sport put together the most dominant team with the most dominant players. For those just tuning in Monday to the College Football Playoff National Championship presented by AT&T against Ohio State, believing they might just see a competitive game, they saw exhibit No. 13 showcasing why the Buckeyes simply had no chance.

There was Heisman Trophy winner DeVonta Smith owning Ohio State so completely that he snatched multiple title-game records before halftime and would have shattered more had he not dislocated a finger on his right hand. There was running back Najee Harris, bulldozing through the Buckeyes with such force that their collective wills inevitably broke. Leading it all was quarterback Mac Jones, orchestrating yet another nearly flawless offensive performance while, yes, setting his own championship records along the way.

“To me, this team accomplished more almost than any team,” said Alabama coach Nick Saban, who won a record seventh national title. “Played 13 games, went undefeated with all the disruption that we had in this season. I think there’s quite a bit to write about when it comes to the legacy of the team.”

They played football during a pandemic.

It might not sink in how remarkable this season truly was until much later, perhaps years down the road, with time to reflect on the extraordinary circumstances in which it all came about.

“It was an unprecedented year with a lot of adversity,” Alabama offensive tackle Alex Leatherwood said. “But we just stayed the course. Tried to stay focused and took everything day by day and really got everybody bought in and locked in to what we wanted to achieve — and we came out victorious.”

Ohio State pushed for this opportunity too, believing it also had a championship-caliber team with Justin Fields leading the way. Although the Buckeyes started their season later than Alabama, they dealt with myriad coronavirus issues to get to this point — and even discussed whether to postpone this championship game because they had more COVID-19 woes over the past week.

That all speaks to the uncertainty that filled this season. Nobody truly knew whether college football would make it to the finish line, as coaches basically told anyone who would listen, “You’re only as good as your last test.” The season felt precarious every day, with coaches, players and trainers holding their breath awaiting coronavirus test results.

That only heightened the strain on players as they did their level best to follow all the safety protocols to keep playing. As teams across the SEC dealt with outbreaks, and Saban dealt with coronavirus himself, only one team truly felt like a sure thing: Alabama, thanks to Smith, Harris, Jones and everyone else. Yes, there were a few close calls along the way. But this is a team that failed to score 40 or more points only twice and had three players finish in the top five for the Heisman — and you could make a very real case today that they should have finished 1-2-3.

This does not just happen by accident, of course. Saban recruits the best players, then develops the best players. But this type of offensive performance wasn’t preordained, either. Saban saw the shifting landscape in college football to wide-open, score-at-will offenses and shifted with it — reinventing the Crimson Tide into an unstoppable offensive force. Consider the first two times he won a national championship with Alabama: The Tide scored a combined 58 points — just six more than where they ended up Monday night.

Alabama offensive coordinator Steve Sarkisian once again called a masterful game. Knowing full well Smith would be keyed on every play, he put Smith in new and different formations to get him the ball. But most of the time, Smith just got behind the Ohio State defenders and outran them. By the time the first half was over, Smith had 12 catches for 215 yards and three touchdowns, broke three SEC career records, set a BCS/CFP championship game record, tied another and set a school bowl record.

One year after college football experts declared Burrow’s LSU squad the greatest offense of all time, Alabama made its own claim to that crown. None of that should come as a shock. Alabama missed the playoffs a year ago and watched the division rival Tigers roll through everyone in similar fashion. Did anyone think Saban would simply be fine with that?

Jones, who hobbled on a bruised leg for a good chunk of Monday’s second half and still delivered one perfectly placed pass after another, took it a step further than declaring Alabama the greatest offense.

“I think we’re the best team to ever play,” Jones said. “There’s no team that will ever play an SEC schedule like that again. But at the same time, we’re just so happy to win this game and put the icing on the cake. There was not a lot of pressure; we just wanted to go out there and play the game we’ve all been playing since we were 5 years old.”

Despite all the unknowns about how this season would unfold, the Crimson Tide committed to each other.

“We had a mission,” Smith said. “Everybody wanted to end things the right way. We just all came to work every day and just put in the work. We got the result that we wanted.”

And ultimately, the result that we could all see coming.