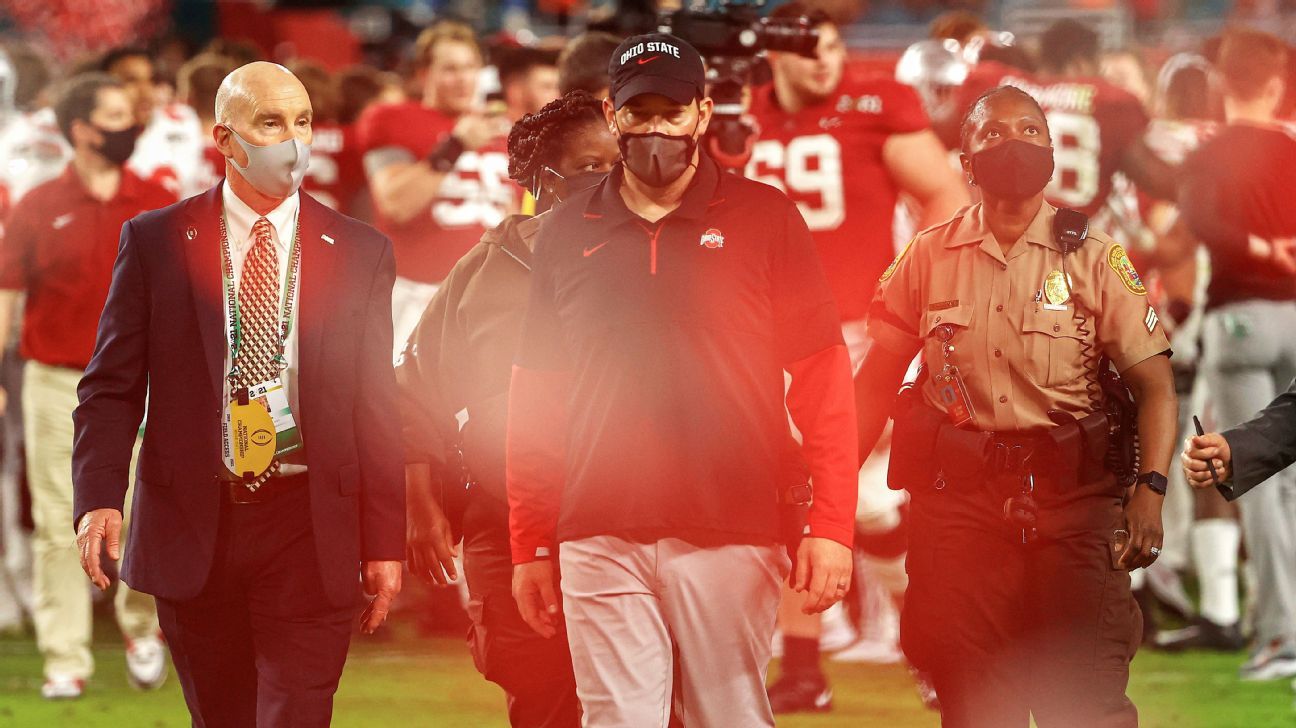 
RYAN DAY KEPT it together, because that’s what he does. There would be no outbursts or regrettable lines on this day.

But the Ohio State head coach didn’t run from his emotions, either. “Sad, angry, frustrated, all of the above,” Day said Aug. 12 about the previous day’s decision by the Big Ten to cancel the fall season because of concerns around the coronavirus pandemic. He described the 2020 Buckeyes as a “once-in-a-lifetime” team and said it was “devastating” not to see that team take the field.

He looked five months ahead to early January, contending the only way the Big Ten could salvage a football season was by starting right after the new year rather than the spring. By wrapping up before the NFL draft in April, the conference could retain some star draft-eligible players, such as Ohio State quarterback Justin Fields. A January start also would create more time before the ensuing fall season and allow midyear enrollees the chance for two seasons in one calendar year.

“If you play a full schedule starting in the spring, like when you get into March, now you’re asking for trouble,” Day said then. “But if you play an eight- or nine-game season, push it back to January, then that’s real. It’s important.”

Just over a month later, however, the Big Ten reversed its initial decision (thanks in large part to a vocal Fields) and put together a shortened fall season. There were still huge hurdles to clear, but the idea of Day leading Ohio State onto the field Jan. 11 to face Alabama for a national title was no longer pure fantasy.

That’s precisely what Day and Ohio State did Monday night at Hard Rock Stadium in Miami Gardens, Florida. The Buckeyes lost to the Tide 52-24, a sour note to end a season like none other. But just getting there was an achievement.

Fields, the Buckeyes’ highest-profile player, launched a #WeWantToPlay petition that collected more than 250,000 signatures within a day. Day, not a frequent tweeter, continued to apply pressure through social media. Borchers, who played for Ohio State in the early 1990s, became the Big Ten’s leading medical voice to convince the presidents and chancellors to reinstate the season.

Although Nebraska, Iowa and other Big Ten programs also pushed for a season, Ohio State had the biggest brand, the loudest voice, the best team and the most clout to see it through. As one Big Ten assistant coach later told me: “They’re the team that wants the season the worst. The Buckeyes, they can win the damn thing.”

Ohio State ultimately got a season, but it became a grind on multiple levels. The Buckeyes played five regular-season games and just one contest between Nov. 21 and the Big Ten championship on Dec. 19. As Day noted Nov. 19, “We’ve had 57 practices and we’ve only played three games. Very strange.” When archrival Michigan canceled a Dec. 12 game at Ohio Stadium, Ohio State needed Big Ten administrators to change the minimum-games requirement for the league championship game so they could qualify.

The Buckeyes also faced daily or weekly anxiety around COVID-19 test results, game cancellations and their chances to reach the Big Ten title game and possibly qualify for the CFP. Ohio State was hardly alone in navigating such obstacles, but no other team — not even Alabama — encountered so many twists and turns. That the Buckeyes had legitimate national championship aspirations added excitement, but also angst.

“Not seeing our families, many of us not being able to see our girlfriends, and just to be in this bubble and to just be around each other, it’s been tough,” safety Marcus Williamson said. “To go through all that since June and then to have our season ripped away, there was a lot of grieving going on around these walls and these hallways.

“To have it come back and to show up to work every day, putting in the hours that we do, it can be rough on your health and on your mental health,” Williamson added. “Having those brothers right there next to you and you know they’re going through the same thing, I think it’s helped a lot of guys.”

Day was transparent about what players, coaches and staff endured in 2020. He repeatedly noted the stress and anxiety, from the initial season postponement, to the restart, to the stop-and-start grind toward the finish line in South Florida. He prioritized mental health long before the pandemic. In June 2019, he and his wife, Christina, launched a fund for pediatric and adolescent mental wellness at Nationwide Children’s Hospital in Columbus. The topic is deeply personal for Day, whose father died by suicide when Ryan was just 9 years old.

Day was also attentive to the toll that playing during a pandemic took on his players and their families.

“It hasn’t been easy. I think the hardest part was probably going through the holidays, not being around their families,” Day said Thursday. “And then, the constant change: lack of routine, change of course here and there, and then the uncertainty. It’s something that has been difficult. … They’ve been able to sustain through a lot of tough times and adversity, so that’s been one of the silver linings.”

Even after Monday’s loss, Day’s mind was on his players leveling out.

“We need a break,” he said. “We all need to get away for a while. This has been a long, long road. Guys miss their families, and they deserve time to be with them. We’ll unwind for a little while, have an opportunity to reflect on what the season has been, and then get back into it. You can’t just go back into work here. You need some time to rest and reflect.”

IT’S EASY TO FORGET Day is only in his second full season as a head coach and fourth overall at Ohio State. At 41, he’s younger than six of his full-time assistants, but also well-positioned to guide Ohio State through a season like 2020.

“He’s a players’ coach,” defensive coordinator Kerry Coombs said. “He feels the players. He talks to the players all the time. That’s one of his greatest gifts. He has a really good understanding of this type of young person in this environment. He will frequently give us suggestions on things to read or watch that don’t have anything to do with football but have everything to do with young people, and it’s really helpful.”

Ohio State’s on-field log included the usual lopsided wins against inferior Big Ten competition. But the Buckeyes delivered their most complete and validating performance in the CFP semifinal against Clemson, the team that had ended Ohio State’s 2019 season and many assumed would face Alabama. Day called the Clemson win “a landmark game” in program history.

There were more obstacles heading into the title game. Fields was still recovering from a massive hit to his side in the Clemson win. Between positive cases and contact tracing, COVID-19 issues began impacting the roster in November and limited position groups, like offensive line, wide receiver and linebacker. There have also been issues in recent weeks with the defensive line. Ohio State had three starters sidelined against Alabama, including defensive tackle Tommy Togiai, who Big Ten coaches considered the team’s most disruptive defensive lineman. At one point last week, there were rumblings of potentially postponing the title game.

Day made it clear throughout the week his team wasn’t just happy to make the title game. Any minute not focused on Alabama was a minute wasted. Yet he continued to be asked, and continued to acknowledge, the difficult and draining path to South Florida. Ohio State will likely win more titles and play in more national championship games, but it will never have an odyssey quite like this one.

“The way that our kids fought for a season and then came back, dealt with all the adversity along the way of games being canceled, guys being out, for some programs there was a lot of guys out early and they kind of got them back and were able to get in a rhythm. It was very, very difficult for us to do that,” Day said after Monday’s loss. “So for us to continually work through all of that and get to this moment right here was an unbelievable success.

“The goal of the game was not to get here; the goal was to win the game. But all that being said, I couldn’t be prouder of our culture, what our kids are made of and where the program is headed.”