The 2020 college football season in photos 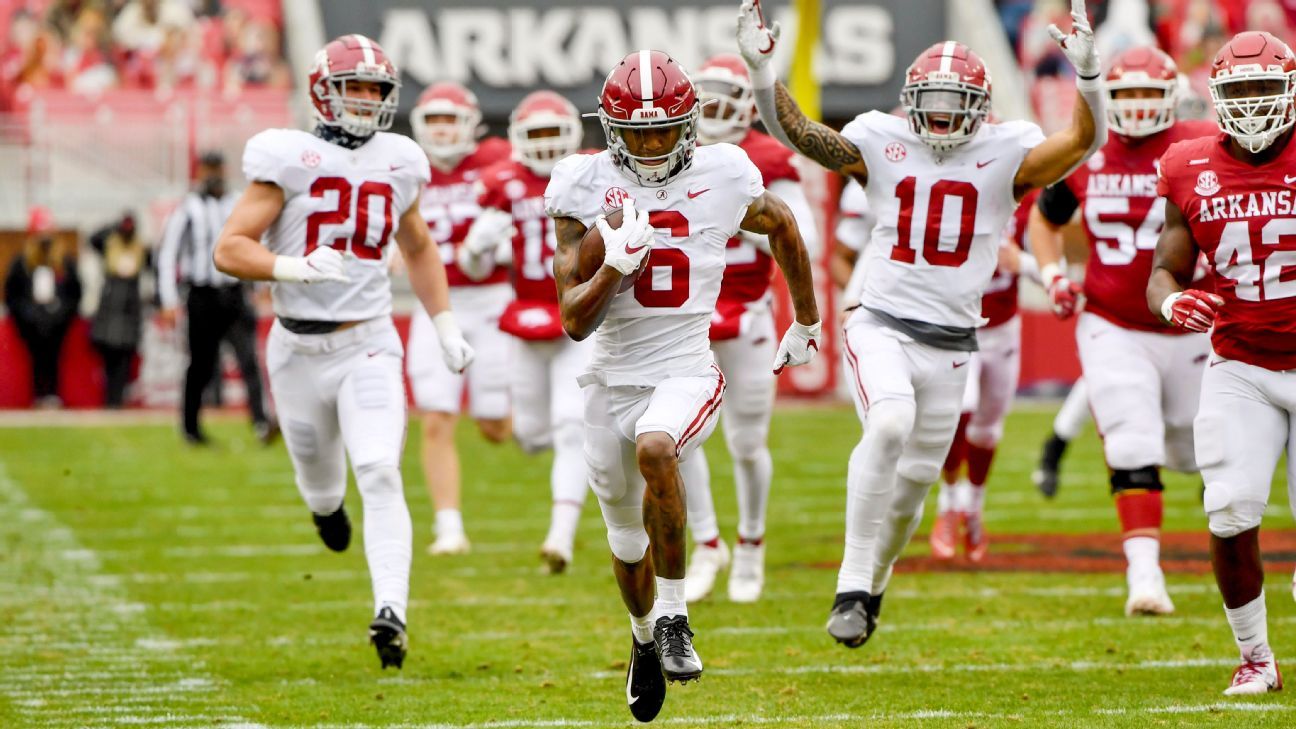 
College football in 2020 was unlike any other season in the sport’s history, and it brought unfamiliar images to the game: athletes publicly campaigning for racial equality; game delays, postponements and cancellations around COVID-19 issues; stadiums largely empty, with few to no fans or school bands; and so many masks.

But the game still mostly looked like the game. There were big upsets, teams that surprised in good and bad ways, players and moments that grabbed our attention — hello, Heisman Trophy winner DeVonta Smith! — as well as the expected domination by Alabama, Clemson and Ohio State.

These are the images that we’ll remember from the 2020 college football season.

Related: The sports year in photos 2020

Months before the FBS season kicked off on Sept. 3, some players were leading by example. As the United States watched racial justice movements spread across the country following the killings of George Floyd and Breonna Taylor, Clemson players showed how the movement was being felt at the highest levels of the sport, with Black athletes and allies raising awareness. Mike Jones Jr., Cornell Powell, Darien Rencher and Trevor Lawrence organized a protest and march in South Carolina, speaking at Clemson’s Bowman Field and leading a march of thousands.

On Aug. 11, the Big Ten became the first Power 5 conference to postpone the football season, leading parents of players to fight for the season to resume in the fall. Randy Wade, the father of Ohio State cornerback Shaun Wade, organized a rally of parents from different schools outside of the Big Ten headquarters in Rosemont, Illinois. The league would announce on Sept. 16 that its presidents and chancellors had unanimously voted to resume competition.

Aug. 29: An eerie glimpse of the season to come

In the first Division I college football game of the season, Central Arkansas’ 24-17 victory over Austin Peay provided a first look at the sport in a pandemic year, with a crowd of just 2,000 people and more on-field sounds picked up by microphones. Power 5 schools would kick off the following week.

In the first major upset of the season, the unranked Ragin’ Cajuns knocked off the No. 23 Cyclones 31-14, though it turned out to be just the first step to Louisiana establishing itself as one of the powers in the Sun Belt Conference. The Cajuns finished the season as co-champions with Coastal Carolina, after the Sun Belt title game was canceled because of coronavirus issues. Iowa State, a program on the rise, ended up Fiesta Bowl champion and 10th in the College Football Playoff rankings.

One of the biggest surprises of the college football season was also one of the most short-lived. Costello, the senior Mississippi State quarterback, made Heisman watch lists immediately after tearing up Bo Pelini’s LSU defense for 623 yards in a 44-34 win, a conference record for passing yards in a single game. Little did anyone know, that same defense wouldn’t be able to put up much of a fight against anyone and Costello wouldn’t make it to the end of the season as Mike Leach’s quarterback after struggling the following two games with a combined seven interceptions.

In the Big Ten’s opening week, Indiana upset Penn State — which was expected to be at worst the second-best team in the Big Ten — on a Penix 2-point conversion that fans will surely argue over for decades. Some believed Penix was clearly in the end zone, while others argued he wasn’t even close to crossing the plane. Final score: 36-35.

The Florida coach made headlines for pushing the COVID-19 restrictions — from requesting a stadium full of fans at home after losing to Texas A&M to … jumping into the stands to celebrate with maskless fans after the Gators defeated Georgia 44-28 in the World’s Largest Outdoor Cocktail Party.

Mullen wasn’t the only one testing COVID-19 protocols in Week 10. After Notre Dame’s 47-40, double-overtime victory over Clemson — a game in which the visiting Tigers didn’t have Trevor Lawrence after he tested positive for COVID-19 — thousands of fans flooded the field and packed together to celebrate. Notre Dame would implement mandatory coronavirus testing for students, as well as strict penalties for those who wouldn’t comply. The win was the key step for Notre Dame — a proud independent in a normal season — in punching its ticket to the ACC title game — the first conference championship game in program history.

Nov. 21: Michigan’s season summed up in a single moment

Michigan went 2-4 under Jim Harbaugh this season, its worst record since a 3-9 mark in 2008. But perhaps the best way to illustrate how difficult this season was for the Wolverines, who wouldn’t play in a bowl game for the first time since 2014, is a triple-overtime game against Rutgers. Giving Michigan a game isn’t something Rutgers typically does, let alone three OTs.

The Buffalo running back, a player not many knew coming into the season, posted a historic performance against Kent State that basically broke Twitter. Patterson ran for 409 yards and an astounding eight touchdowns, tying former Illinois star Howard Griffith’s FBS record set in 1990. Patterson finished the season with 1,072 yards in just six games.

After having a false positive COVID-19 test in October, Saban tested positive again on Nov. 25 and had to skip the Crimson Tide’s senior day and Iron Bowl against Auburn. But even from home, Saban made his presence felt: He recorded a video message for Alabama’s seniors who were honored before the game. Alabama beat Auburn 42-13.

Coastal Carolina and BYU in the game of the year? In a matchup that was scheduled on the fly — a game widely referred to as “Mormons vs. Mullets” — with hopes of boosting the chances there would be a Group of 5 playoff participant, the Chanticleers’ defense stopped BYU one yard short of a touchdown that would have given the Cougars the victory.

No. 6 Florida was in position to knock off defending champion LSU after stopping the Tigers on a third down that would have resulted in a punt. Then Gators cornerback Marco Wilson inexplicably threw Tigers tight end Kole Taylor’s cleat 20 yards downfield. The Tigers ended up kicking a winning 57-yard field goal for the 37-34 upset. Florida would finish the season No. 7 in the CFP rankings.

Vanderbilt was one of the worst teams in the FBS during the 2020 season, but its kicker provided arguably its brightest moment. Fuller, the goalkeeper for the school’s SEC women’s soccer champs, became the third woman to score points in an FBS game, and the first to do so in a Power 5 game. “This whole time has been if I can do it, if I’m good enough to do it,” Fuller said after the 42-17 loss to Tennessee in which she kicked a pair of extra points. “It wasn’t if I was a girl or not. So that’s something I’ve really appreciated.”

For the first time since 1943, the Army-Navy game was held at West Point, with only cadets and midshipmen in attendance. Typically, the two would play the only game on the second Saturday in December at Philadelphia’s Lincoln Financial Field, but they shared the date with the rest of college football during a revised schedule because of the pandemic. As Lt. Gen. Darryl A. Williams, the West Point superintendent and a former Army defensive lineman, told ESPN’s Ivan Maisel: “This game must be played. We’d play this game in a parking lot if we’d have to.”

If a single play represented how impressive Alabama looked this season, Harris galloping over a Notre Dame defender in a 31-14 Rose Bowl win was the defining image. Harris more than lived up to the standard set by Alabama running backs under Nick Saban, rushing for 1,387 yards and 24 touchdowns, as well as 346 receiving yards and three touchdowns in 12 games this season.

Between Justin Fields, Ryan Day and Randy Wade, Ohio State fought hard to play the 2020 season because the team felt it had as good of a chance as ever to win a national championship. The Buckeyes’ Sugar Bowl blowout of Clemson showed why, dominating one of college football’s most powerful programs of the past half-decade in a 49-28 win. In one of the greatest bowl performances by a quarterback, Fields threw for 385 yards and six touchdowns with just one interception — even after taking a brutal hit from Clemson linebacker James Skalski in the second quarter.

Following a breakout season in which he led the FBS in receptions (105), receiving yards (1,641) and receiving touchdowns (20), Smith pulled off a feat not seen since Desmond Howard, winning the sport’s top individual honor as a wide receiver. His Alabama quarterback, Mac Jones, who was third in the voting, labeled Smith “the most electric player in college football.” The ceremony was held virtually because of the coronavirus pandemic.