UFC debate — Does Max Holloway or Calvin Kattar have more at stake on Fight Island? 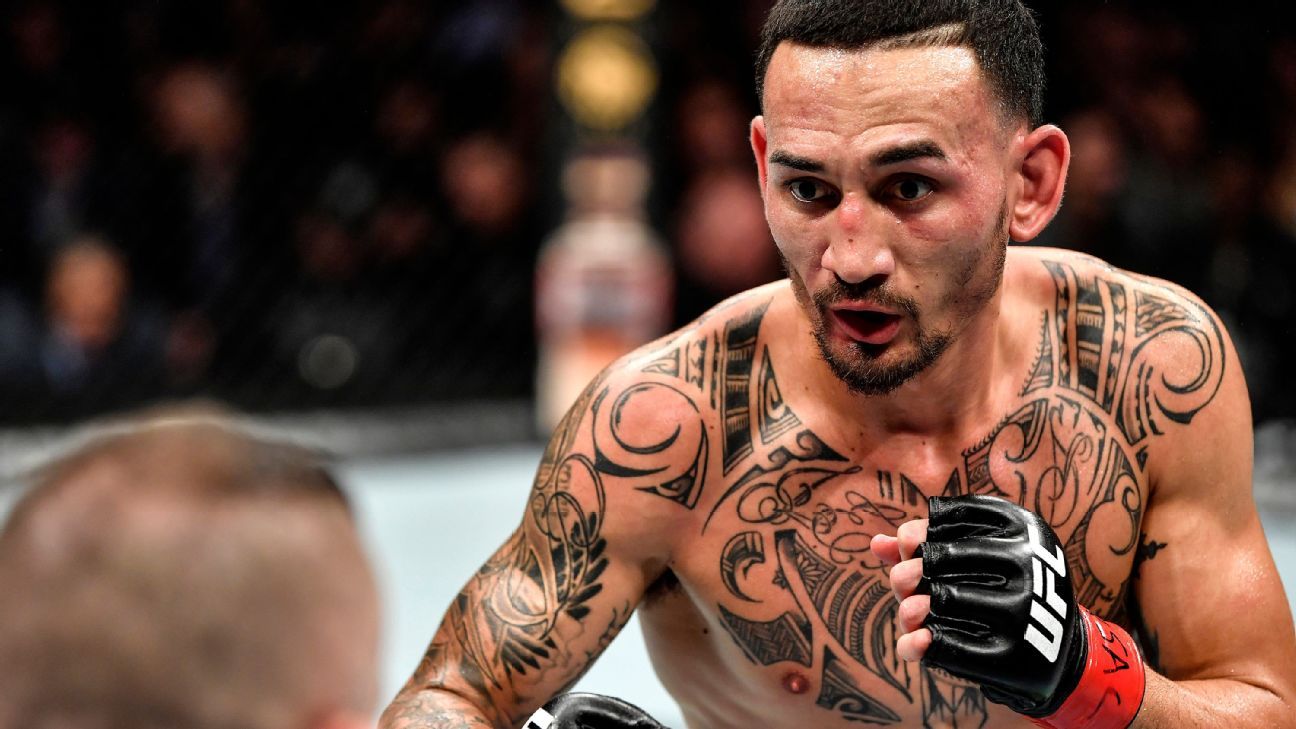 
When Max Holloway leaves the Octagon after Saturday’s UFC Fight Night main event, he could be the loser of three straight and four of five. That would be quite a cliff from which one of the sport’s most prestigious careers would be dangling.

Calvin Kattar, meanwhile, is trying to build his resume. He’s won four of five, albeit against much lesser competition. This is his chance — on network television — to prove he’s ready to take the next step in becoming an elite fighter.

The UFC will open its 2021 schedule with a main event that should have title implications in the featherweight division. Former champion Max Holloway will take on the surging Calvin Kattar on Fight Island. Holloway fought just once in 2020, a razor-thin loss to champ Alexander Volkanovski. Kattar, meanwhile, went 2-0 last year and has won four of five fights overall.

It’s a crucial bout between ESPN’s No. 2-ranked featherweight in Holloway, a former champion looking to land another title shot, and his sixth-ranked opponent. Holloway was a slight -160 favorite as of Tuesday morning while Kattar was +140.

ESPN’s Marc Raimondi and Jeff Wagenheim examine who has more at stake and what fans can expect when they tune into ABC at 12 p.m. ET for the main card.

Raimondi: This is a great fight, and it’s a pivotal one in the featherweight division. It might even be a title eliminator. But it’s pretty clear to me that Kattar is the one who has the most at stake.

Holloway is already a made man. He’s the most accomplished fighter in UFC featherweight history, holding a host of records. Win or lose, Holloway is a popular name in the UFC with blue-chip sponsors, and he will still be a factor in either the featherweight or lightweight division for as long as he wants to be.

Kattar, though, really needs this win to establish himself as not only a legitimate contender, but someone in whom fans can start investing. Holloway has had a ton of fights like that, but for Kattar, this is the first — and maybe the only time he’ll get one.

Wagenheim: I agree that this is a big one for Kattar, but I’d frame it as a big opportunity with a big upside for him, while Holloway is the one who has the most to lose.

Yes, Max has been at the peak of Mount Featherweight, and even now, coming off two losses in a row, he’s still not far from the top. That’s because both losses came against Alexander Volkanovski, who’s the champ. And there’d be no shame in dropping this one to Kattar, either, but it would be a third straight defeat and would be coming against someone ranked below him. Once a fighter starts losing those types of fights, the fall-off can be steep.

Tony Ferguson’s recent fall comes to mind. He entered 2020 on a 12-fight win streak, and many thought he would be the one to dethrone Khabib. Instead, he got brutalized by Justin Gaethje and dominated by Charles Oliveira. Both were ranked lower than Ferguson. Now there’s speculation about whether he’ll ever again be a contender. Holloway does not seem in peril of such a dramatic free fall, but things could slip away for him.

Do you envision that type of dropoff for Kattar?

Raimondi: I agree with your points. But the difference here is that while Holloway has already had a great run with the featherweight title, he’s nowhere near the end of the line. He’s still just 29 years old, and both Volkanovski fights, especially the most recent one, could have gone either way. There will be ample opportunities left for Holloway to mount a comeback.

What I’m saying is when you have a reputation like Holloway has built, the UFC continues to find opportunities for you to get back on track. With all respect to Kattar, he does not have that level of clout yet. A victory here would propel him in that direction.

That’s why I think this is a much bigger fight for Kattar. I could envision a scenario where Holloway moves up if he loses and immediately becomes a lightweight contender. We’ve seen it before when former champions jump divisions. And even if Holloway stayed at featherweight, because of his name value, he’ll only be one or two wins away from another crack at the title.

Wagenheim: Max is only 29, true, but look at all of the tread on those tires. This will be his 28th fight in a pro career dating back to 2010, and while Kattar has been in the sport for nearly as many fights, Holloway is the one who’s been doing it at the highest level seemingly forever.

I mean, he was all of 20 years old when he made his UFC debut — against a guy named Dustin Poirier. A year and a half later, he was in the cage with Conor McGregor. Fights like those — plus, two with Volkanovski, two with Jose Aldo, etc. — add up on a fighter and can have a debilitating effect. Holloway is an old 29.

Kattar is 32, but he didn’t even debut in the UFC until he was 29. He’s the one with time on his side, win or lose. Which leads me to ask: Who do you think will win?

Raimondi: That’s a good question, and to be honest, I don’t have a solid answer on that one. I usually wait until after the official weigh-ins to predict fights. In MMA, as we’ve seen over and over again, nothing is set in stone until they step on the scale and those weights hit the mark. With that being said, I can understand why Holloway is the favorite. He’s an excellent striker, offensively and defensively. One could make the strong argument that he got the better of Volkanovski in July on the feet, knocking him down once and rocking him another time.

Kattar has more power than Volkanovski and has more of a boxing-oriented striking game. He’s dangerous. I could see him doing very well early, maybe even putting Holloway in danger. But in a five-round fight, with Holloway’s experience and ability to come back in late rounds with incredible cardio, I understand why the betting lines are the way they are. I’m sure you’ll disagree with me on this, too, Mr. Contrarian.

Wagenheim: Wrong again, Raimondi! I don’t disagree with you that this is a tough fight to pick. And I don’t disagree that the betting line belongs where it is. But unlike you, Mr. Wait Until Weigh-ins, I don’t need to wait any longer to weigh in on this pairing. I’m leaning toward Kattar, and not just because if I didn’t pick the Methuen kid I would be hounded by my fellow Massachusetts folks like I was picking the Lakers against the Celtics. No, I’m taking Kattar because of his polished standup skills and because this is the biggest fight of his life.

Holloway, on the other hand, is coming off eight straight UFC title fights. This is the first time since 2016 that he’ll step into the Octagon with no belt on the line. Now, that typically would trigger my “there are levels to this game” rule of thumb and put me in the camp of Holloway. But I just think Kattar is going to be sharper, more focused on this fight rather than the big championship picture, and he will rise to the moment.

Raimondi: Don’t get me wrong here. I’m bullish on Kattar and his team. The New England Cartel is cooking up something pretty darn good in your neck of the woods.

Look at what Rob Font just did to Marlon Moraes last month with a star-making first round-stoppage. Kattar and Font are best friends and each other’s top sparring partner. I expect to be hearing a lot more from them and coach Tyson Chartier in 2021.

But Holloway is still elite, someone who can be back on the pound-for-pound list in the near future.

Wagenheim: It’s true that despite losing two in a row and three of his last four, Holloway is still No. 2 in our featherweight rankings, ahead of the guy who is expected to get the next title shot, Brian Ortega — which makes sense because Holloway owns a knockout victory over Ortega. It’s always a pleasure to watch Holloway do his thing. He is one of the greats. That’s why I’m calling this the biggest fight in Kattar’s career.

The first time Kattar ventured into this biggest-career-fight territory, in 2019, he lost to Zabit Magomedsharipov, a Russian, in a Moscow main event. But he’s won two in a row since then, and this time he’ll be ready for the moment. And if he wins, he’ll be on the verge of a new biggest fight ever, one with a championship on the line.