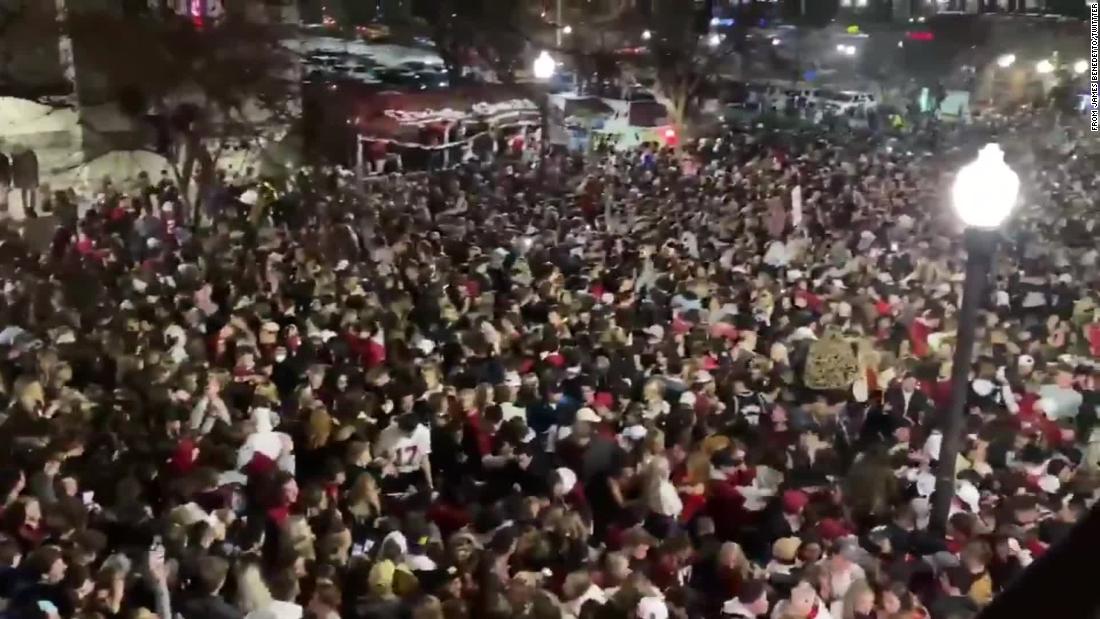 For the sixth time under head coach Nick Saban, the top-ranked Alabama Crimson Tide are national champions, pulling away to defeat No. 3 Ohio State 52-24 on Monday night at Hard Rock Stadium in Miami Gardens, Florida, in front of a crowd of 14,926.

Saban now has seven national titles, more than any other coach in history, surpassing the late legendary Crimson Tide coach Paul “Bear” Bryant, who had six.

“I’m just happy that we won tonight,” Saban said. “I really haven’t thought about that because you’re always looking forward. I just love this team so much and what they’ve been able to do. I can’t even put it into words.”

In addition to his six championships with Alabama, Saban won the national title when he was at the helm at LSU, with the Tigers winning the BCS title game in 2003.

After the game, hundreds of revelers packed several blocks of University Boulevard in Tuscaloosa — the University of Alabama’s home — celebrating the win on a strip known for its bars and restaurants near the western edge of campus.

The university and the city’s mayor had asked fans before the game to avoid large gatherings, keep 6 feet of distance between others and wear masks. Many of the postgame revelers were not wearing face coverings, images on social media show.
The state also is under a “safer at home” order, which generally requires people to wear masks when they’re in public and within 6 feet of others. The celebrations came as Alabama — like the country as a whole — was hovering at or near all-time highs for average daily new Covid-19 cases and deaths, Johns Hopkins University data show.

On the field, Alabama has won six national titles with Saban in the last 12 seasons, and it’s the 11th time in the last 15 seasons that a team from the Southeastern Conference has lifted the national crown.

When speaking to reporters, Saban, 69, said he didn’t think anyone compares to Bryant.

“His legacy lasted over a long, long period of time,” Saban said. “We all have to adjust with the times. Obviously things are a little different now. The challenges are a little bit different with the spread offense, the things that make it more difficult I think to play good defense in this day and age.

“I think Coach Bryant is sort of in a class of his own in terms of what he was able to accomplish, what his record is, the longevity that he had and the tradition he established. If it wasn’t for Coach Bryant, we would never be able to do what we did. I mean, he’s the one that made Alabama and the tradition at Alabama a place where lots of players wanted to come. We’ve been able to build on that with great support.”

Alabama quarterback Mac Jones was asked if Saban is the greatest college football coach of all time.

“Come on, man. Of course he is,” Jones said. “How could he not be? He does it the right way. He recruits well, but more importantly develops great players and young men. I’m just so blessed that he gave me a chance to come here along with all my teammates. I wouldn’t trade it for anything. He’s the greatest to ever do it. He’ll be the greatest for a long time.”

At 13-0, Alabama ended a dominant season as the nation’s only undefeated team. The Crimson Tide also avenged their loss to the Buckeyes in the inaugural College Football Playoff semifinals in the 2014 season.

Jones, despite being hobbled in the second half with what he said was a bone bruise, set or tied multiple CFP title game records: His 36 completions (out of 45 attempts) tied Clemson’s Deshaun Watson. Jones’ 464 passing yards surpassed LSU’s Joe Burrow by one yard, and his five touchdown passes tied Burrow for the record.

Before leaving after suffering a dislocated finger, DeVonta Smith, the winner of this season’s Heisman Trophy and named the offensive MVP on Monday night, set the CFP title game record with 12 receptions (for 215 yards — a record for most receiving yards in a half of the national championship game) and three touchdowns. Najee Harris rushed for 79 yards and two touchdowns and also caught seven passes for 79 yards and one touchdown.

Heading into the fall, the initial outlook for these two teams were quite different. As throughout the US, the pandemic wasn’t handled in the same manner across the college football landscape.

The SEC didn’t waver, opting to play a conference-only schedule for the 2020 season. Though at times impacted by Covid-19 — including Saban having to miss his team’s game against Auburn after a positive test — Alabama had just one game postponed, which would eventually be played later in the season, against LSU.

“To me, this team accomplished more almost than any team,” Saban said. “No disrespect to any other teams that we had or any championship teams. But this team won 11 SEC games. No other team has done that. They won the SEC, went undefeated in the SEC, then they beat two great teams in the playoffs with no break in between.

“This is our fifth game in a row, from LSU to Arkansas to Florida to Notre Dame to here. Played 13 games, went undefeated with all the disruption that we had in this season. I think there’s quite a bit to write about when it comes to the legacy of the team.”

For Ohio State (7-1), vying to become the first team to win a national championship with just an 8-0 record since Minnesota did it in 1941, it wasn’t so straightforward. In fact, it initially looked like Buckeyes wouldn’t get to play at all.

On August 11, the Big Ten Conference announced it was suspending fall sports, including football, because of health and safety concerns related to the pandemic. Just over a month later, on September 16, the conference reversed course, saying football season would resume in late October, which would include a specification that a team would need to play at least six games to be eligible for the conference championship game.

But Covid-19 wreaked havoc on the schedule, and Ohio State had to cancel its game against Illinois, while two other schools (Maryland and Michigan) canceled against the Buckeyes because of their own Covid-19 concerns. That left the Buckeyes, at 5-0, on the outside looking in for the Big Ten title game.

On December 9, officials from the Big Ten voted to amend its policy, which thereby extended Ohio State’s season. The Buckeyes would come back against Northwestern in the Big Ten title game, and then went on to crush Clemson in the Sugar Bowl College Football Playoff semifinal.

According to statistics provided by the College Football Playoff, Ohio State was one of 15 schools that had three games canceled and/or postponed without being made up. In all, according to the CFP, 111 games were canceled throughout the season because of the pandemic.

The Buckeyes were without some of their key players on defense and special teams heading into Monday’s game. Quarterback Justin Fields, banged up from the semifinal Sugar Bowl win against Clemson, wasn’t 100%. Running back Trey Sermon left the game after one carry with an upper-body injury, with ESPN reporting he was hospitalized.

After the game, Ohio State head coach Ryan Day said this loss would motivate his players that are returning next season and praised his team.

“I thought that the culture of our program, the leadership of our program, the way that our kids fought for a season and then came back, dealt with all the adversity along the way of games being canceled, guys being out … for us to continually work through all of that and get to this moment right here was an unbelievable success,” Day said.

Why is Nick Saban smiling? The answer goes beyond him leading Bama to another title

Analysis: It’s easy for big business to dump the GOP now. Tax hikes will be the real test

China set to launch long-awaited IPO reforms to reset the…