US Coronavirus: The US has averaged more than 3,000 Covid-19 deaths a day over the past week 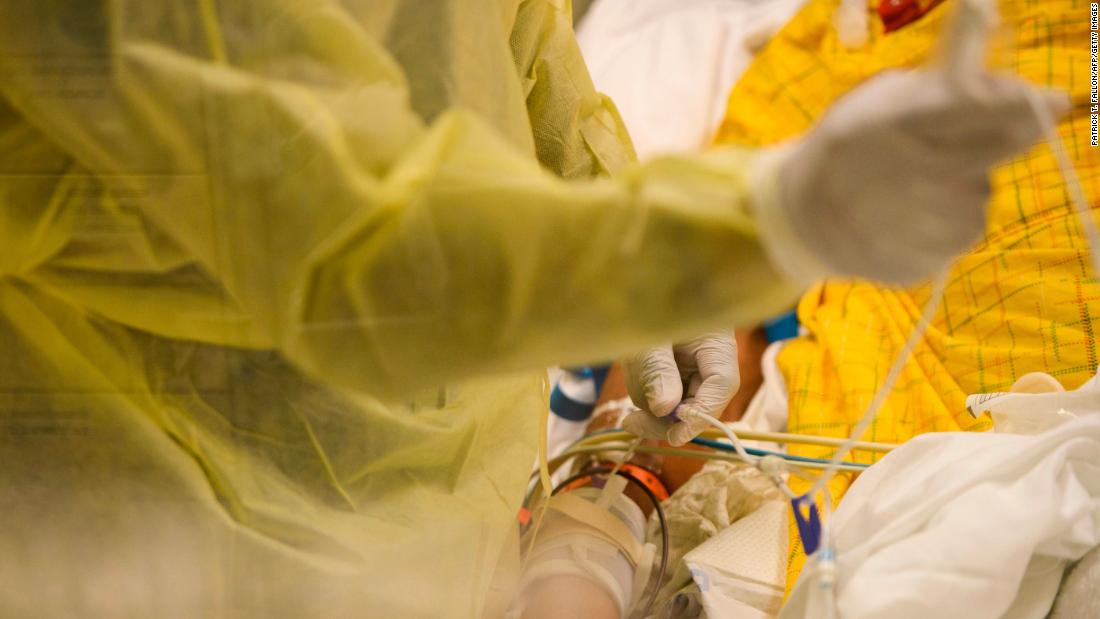 The US averaged more than 3,223 Covid-19 deaths a day over the past week, according to Johns Hopkins University. That’s a few hundred more daily than the 2001 strikes.

The Trump administration official expects reserved doses to be distributed over the next two weeks.

The massive surge of Covid-19 nationwide has been fueled by holiday travels and gatherings that experts had warned against.

“This is what we were afraid of — people letting their guard down over Christmas and New Year’s,” New Jersey Gov. Phil Murphy said Monday while announcing the spread of the virus was increasing across the state.

Arizona’s hospitalization numbers are at all-time highs due to a surge that the state’s top health official said earlier this month followed the Christmas holiday.

In Los Angeles, which has been battered by the virus for weeks, one health official says the full aftermath of holiday get-togethers is likely still on its way.

“It takes two to three weeks for patients to get sick enough to need the hospital after they’ve gotten the virus, and Christmas was only two weeks ago, and we’re already full,” said Dr. Anish Mahajan, chief medical officer at the Harbor-UCLA Medical Center.

“We don’t have any more ICU capacity,” he added. “All of the hospitals in the region are putting ICU patients in unusual places in the hospital just to find room for them.”

Meanwhile, nearly 9 million people have now received the first dose of a Covid-19 vaccine, and more than 25.4 million doses have been distributed across the US, according to the latest data from the US Centers for Disease Control and Prevention.

As of Monday morning, about 35.3% of doses distributed had been administered, compared with about 30.2% Friday.

Amid a rollout that has been far slower than some officials hoped, more states are abandoning guidelines from the CDC and taking their own approach to administering the vaccine, a new analysis found.

Timelines vary across the country and “access to Covid-19 vaccines in these first months of the US vaccine campaign may depend a great deal on where one lives,” the Kaiser Family Foundation, which studies health care policy, said in a report issued Monday.

The report found 40 states are still in Phase 1a — when the CDC recommends vaccinating health care workers and long-term care facility residents — either fully or partly. Ten states and Washington DC were in Phase 1b. Only Michigan has moved to at least part of Phase 1c, the report said.

States are “making the decision to just get as many people vaccinated as they can,” and bypassing recommendations for vaccine prioritization, said Dr. Paul Offit, a member of the FDA’s vaccine advisory committee on Monday.

“I think where people are right now is they have the vaccine and they just want to get it out there,” Offit said.

Without the “public health infrastructure for mass vaccination” in place, states are having to learn how to manage mass vaccinations in real time, and some are learning quicker than others, he added.

How states are bolstering vaccine efforts

In at least 10 states, National Guard members are helping administer vaccines. Other states have asked dentists, retirees and students to aid in the process.

“These vaccination hubs will expedite vaccine distribution and ensure efficiency in communities across the state,” the governor said.

In California, 1 million health care workers, nursing home residents and staff will receive the vaccine by week’s end, the governor promised Monday, as part of an “all hands on deck” push to serve the more vulnerable residents.

Michigan Gov. Gretchen Whitmer, meanwhile, sent a letter to Health and Human Services Secretary Alex Azar requesting permission to buy up to 100,000 doses of vaccines for the state.

“We remain ready to accelerate distribution to get doses into arms,” the governor said.

The letter comes after Whitmer and other state leaders urged government officials to distribute the vaccine doses that are currently being held back by the Trump administration.

In some parts, students return to school

That all comes as some parts of the country welcomed a wave of students back to in-person instruction this week.

Chicago Public Schools on Monday implemented the first stages of its phased reopening plan, welcoming a little more than 6,000 pre-kindergarten and cluster program students to classrooms.

“There are many students and families, 77,000 in fact, that have chosen an in-person option and I’m excited about the possibility to offer that at this time,” CPS CEO Janice Jackson said in a news conference. “It’s been 10 months since our students have been in school, and I know everyone signed up to do this work for the same exact reason, and that is to provide our kids with the quality education they deserve.”

The district said it has prepared by purchasing air purifiers, face coverings and an abundant amount of cleaning and disinfectant supplies and made significant improvements to ensure all schools have proper ventilation.

“We’ve gone above and beyond … to ensure that students and staff are safe,” Jackson said. “And we’re not done.”

In West Virginia, Gov. Jim Justice announced schools can reopen for “in-person learning for eighth grade and below” starting January 19. Grades 9 through 12 will not be in-person.

“Our medical experts believe … that the exposure for going back to school is extremely minimal. And from the standpoint of our eighth grade on down, it is very, very, very minimal,” the governor said. “And so, they believe that it is absolutely safe.”

School sports practices won’t be allowed to start until mid-February, Justice added, with an aim to return to games in March.

“There’s no perfect answer,” he said. “But the reality is really simple, our kids are becoming devastated by not being in school.”

000 Covid-19 deaths a day over the past week - CNNaveragedCoronavirusCovid19daydeathsHealthUS Coronavirus: The US has averaged more than 3
0
Share

From relocating a WGC event to what’s next for Mike Whan, and more happenings in golf

14th Amendment: What is it and how does it work?