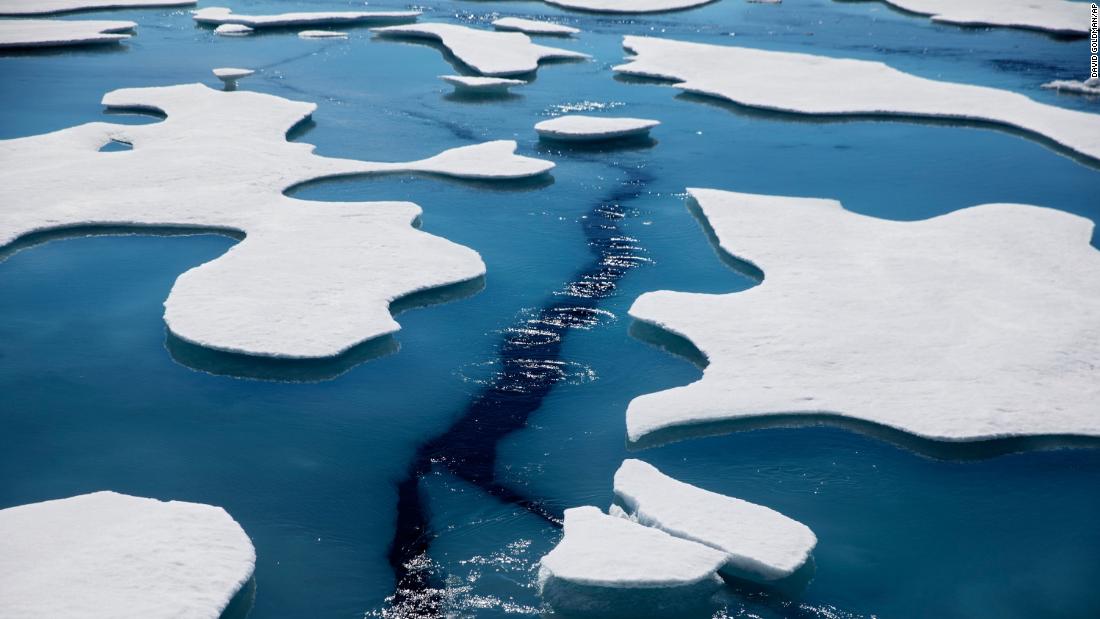 
Tiny microfiber strands, washed into the ocean from laundering our clothes or from industrial wastewater, are polluting one of the most remote regions on Earth.
While microplastics — those measuring up to 5 millimeters in diameter, or about the size of a sesame seed — have previously been found in Arctic sea ice, new research has found that microplastic pollution is widespread near the surface of seawater across all regions of the Arctic, including the North Pole.
The study, published Tuesday in the journal Nature Communications, found that 92% of those microplastic particles are miniscule synthetic fibers — with most of these being polyester.

Researchers say the size, shape and type of the material is consistent with the fibers lost from clothing and textiles through laundry and textile production.

“Microplastics have reached the remote reaches of every corner in the Arctic Ocean, from Norway, to the North Pole, to the Canadian and US Arctic waters,” said Dr. Peter S. Ross, lead author of the study and adjunct professor at the University of British Columbia’s department of earth, ocean and atmospheric sciences.

Despite being a very remote region, the Arctic is intimately linked to “our homes and to our laundry and our shopping habits,” in the rest of the world, Ross added.

Around two-thirds of our clothing consists of synthetic materials, including polyester, nylon and acrylic.

These tiny synthetic fibers can enter the water supply in wastewater from factories or from people washing their clothes. Wastewater treatment plants are able to catch much of it but the rest can eventually flow into rivers, waterways and, ultimately, the ocean.

Sea ice in the Canadian Arctic Archipelago in July 2017. Seawater samples were taken from 71 locations across a vast swathe of the Arctic region. Credit: David Goldman/AP

On four ships, teams of scientists collected seawater samples — from depths of 3 to 8 meters (10 to 26 feet) below the surface — at 71 locations across a vast swathe of the Arctic region. The area stretched from Norway, through the North Pole into the central Canadian Arctic, down through the archipelago, and then west into the Beaufort Sea, straddling the US-Canada border.

Concentrations of microplastics were three times higher in the Eastern Arctic (above Western Europe and the North Atlantic Ocean) than they were in the Western Arctic (above the Western Canadian shoreline and above Alaska). The eastern fibers were also 50% longer compared to the west and also appeared newer and fresher — suggesting that most fibers encountered in the Arctic Ocean originated from the Atlantic.

That’s not surprising, researchers said, given that more water flows from the Atlantic into the Arctic Ocean than it does from the Pacific.

The Arctic is often characterized as the barometer of the planet’s health, and the region is considered extremely vulnerable, especially to the climate crisis.

There are concerns around how these polyester fibers may impact humans and marine wildlife such as birds, fish and zooplankton. Studies have already found microplastics in the guts of fish and sea life, and there are fears about the potential for human ingestion and possible health effects — especially for indigenous communities that rely heavily on seafood.

Though the science on the impacts of microplastics on health is still nascent, Ross said we can be “fairly confident that plastic is not good for any creature of any size or shape or feeding ecology, and that plastic offers zero nutrition.”

“The big challenge for the scientific community is how to characterize and documenting cause and effect for a very complex family of pollutants,” he added.

The global textile industry produces more than 40 million tons of synthetic fabrics a year, and the vast majority of this is polyester clothing.

Ross said there is a growing acknowledgment among many clothing companies that they shouldn’t only see their footprint in terms of water use, dyes, chemicals and emissions, but “also need to address concerns on fibers shedding around laundry and the lifetime of their products.”

“This should underscore an intimate link with every single individual in North America, Asia, Europe, in the northern hemisphere and the far North, where we really shouldn’t expect to find this sort of a footprint,” Ross said.

This article has been updated to reflect a correct conversion from cubic meters to cubic feet.