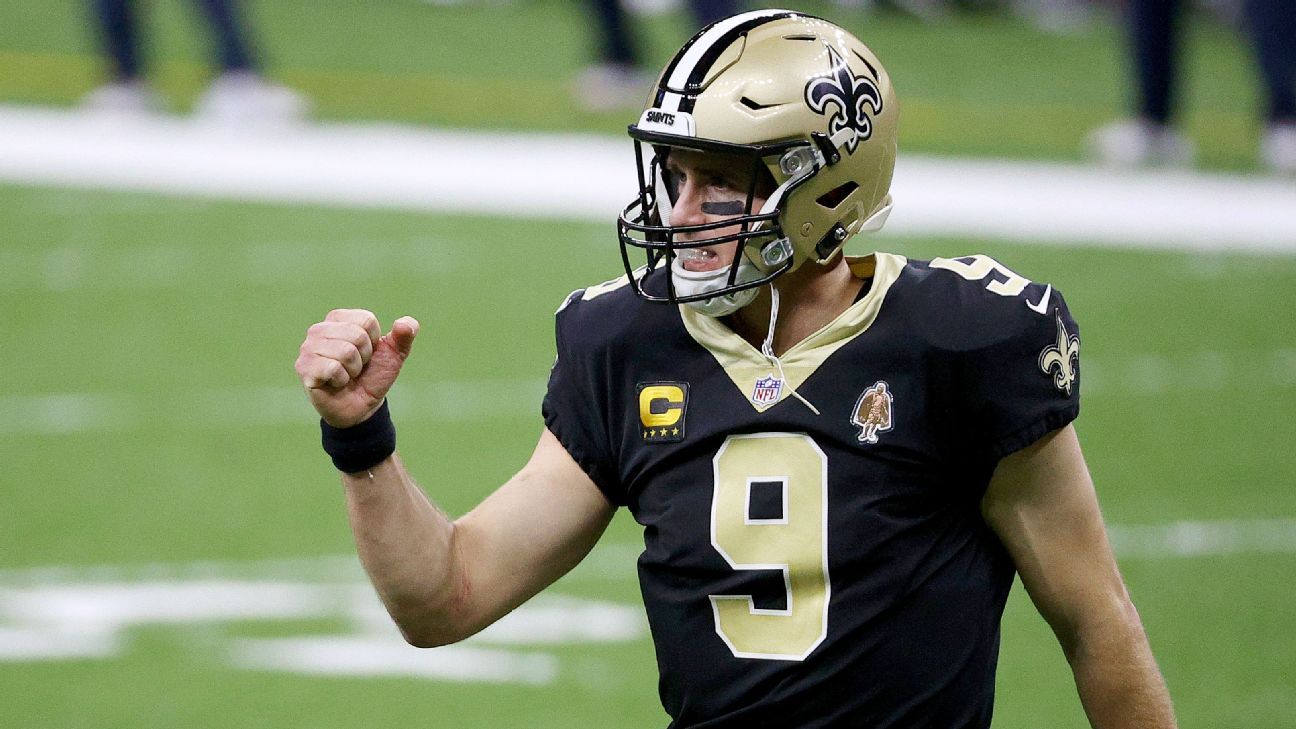 
NEW ORLEANS — Drew Brees vs. Tom Brady, Part III. Another one for the history books.

The second-seeded New Orleans Saints will host the fifth-seeded Tampa Bay Buccaneers in a playoff matchup for the ages next weekend after the Saints slogged through a 21-9 victory over the Chicago Bears on Sunday.

Brees, who turns 42 on Friday, is widely expected to retire after his 20th NFL season. But it won’t come before another epic showdown against the 43-year-old Brady, who cranked up the intensity on this longtime rivalry by signing with the rival Buccaneers this offseason.

“The minute that he signed with the Bucs and came in the division, you felt like that was gonna be a team to contend with,” Brees said of the pending matchup. “So I guess it was inevitable.”

Brees ranks first in NFL history in passing yards, while Brady is first in passing touchdowns and, of course, Super Bowl rings. In Week 1, they became the first pair of starting quarterbacks over the age of 40 to face off. Now they’ll be the first to do it in the postseason.

The Saints (12-4 in the regular season) will be looking for a three-game sweep after they beat the Buccaneers 34-23 at home in Week 1 and routed them 38-3 in Tampa in Week 9.

The Bucs (11-5) have been playing their best football lately. But the Saints are as healthy as they have been all year after receivers Michael Thomas and Deonte Harris returned from injured reserve and running back Alvin Kamara returned from the reserve/COVID-19 list in time for Sunday’s playoff opener.

Thomas (five catches for 73 yards and his first TD catch of the season), Kamara (23 carries for 99 yards and a touchdown) and Harris (seven catches for 83 yards) all made their presences felt in Sunday’s win over Chicago.

But the Saints relied even more heavily on their stout defense while scoring just seven points over the first 40 minutes of the game.

Pivotal play: Brees had a solid enough performance, completing 28 of 39 passes for 265 yards and two touchdowns. But his best play of the day was improvised. Brees had to escape heavy pressure after his first two reads weren’t open late in the third quarter — and he barely got rid of an emergency dump-off pass to running back Latavius Murray. Murray also did an outstanding job of improvising by turning to look for the ball after he delivered a block — then did the rest of the work on his way into the end zone while giving New Orleans a comfortable 14-3 lead.

After the game, Brees said Murray wasn’t even actually in the progression on that play.

“There’s four other guys — and he’s actually blocking,” Brees said. “He was there to cut Khalil Mack. So he was on the ground, and then he popped up, and I just kind of dished it over Mack’s head to Latavius. They played a totally different coverage than what the play was designed for. So there was nobody open.”

Promising trend: The Saints’ defense has been outstanding for most of the past two months — and kept it up Sunday, even with sack leader Trey Hendrickson sidelined by a neck injury. They never allowed the Bears to get into this game even though the Saints’ offense kept the door open so long. Chicago (which scored its only touchdown on the final play of the game) finished 1 of 10 on third downs.

Safety C.J. Gardner-Johnson led the Saints with seven tackles — including a fantastic fourth-down stop when he chased quarterback Mitchell Trubisky down from behind. And stunningly, Gardner-Johnson managed to provoke another Bears receiver into punching him and getting ejected for the second time this season (Sunday it was Anthony Miller; earlier this year it was Javon Wims).

Troubling trends: Saints kicker Wil Lutz missed a 50-yard field goal wide right in the first half and has now missed four of his past seven field goal attempts over the past six weeks. Lutz, who also missed an extra point last week, went to the Pro Bowl last year and had been one of the NFL’s most reliable kickers before his recent skid.

“Wil’s someone that will bounce back,” Saints coach Sean Payton insisted after the game. “I think he’ll answer the bell.”

Also, backup Saints quarterback Taysom Hill lost his sixth fumble of the season when he was sacked while holding onto the ball too long in the second quarter. Hill was looking for a deep pass attempt (which appeared to be open). But he didn’t get rid of the ball early enough. His ball control was also one of his biggest flaws during his four-game stint as the Saints’ starting quarterback when Brees was injured earlier this season.

Lisa Montgomery: US executes only woman on federal death row