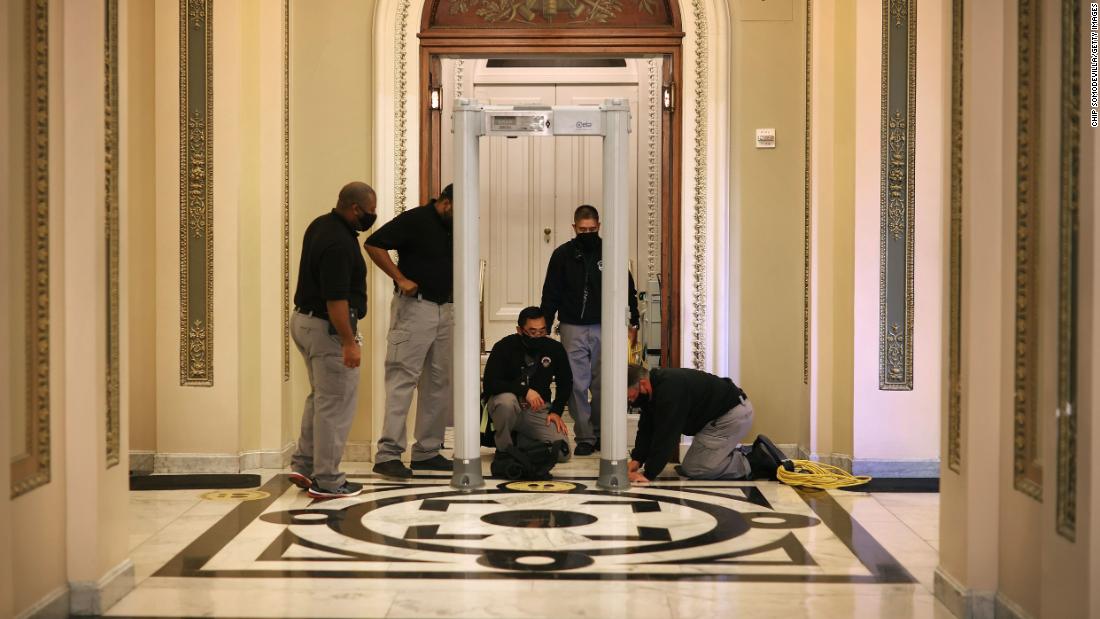 “I did not know if I was going to make it to the end of that day alive,” Democratic Rep. Alexandria Ocasio-Cortez of New York said on Instagram Live on Tuesday. “It is not an exaggeration to say that many, many members of the House were nearly assassinated.”

But with the inauguration just a week away, all security efforts have been focused on planning ahead, giving little room for investigations to look back and decipher how security was breached and what went wrong.

Republican Rep. Lauren Boebert of Colorado, who has previously bragged about her desire to carry a weapon on Capitol Hill and was accused of disclosing Speaker Nancy Pelosi’s location during the last week’s raid, was involved in a standoff with Capitol Police at the newly installed metal detectors when trying to get on the floor Tuesday night.

“It is clear metal detectors would not have deterred the violent acts we saw; this political stunt does nothing to improve the safety of Members in the Capitol complex,” Boebert said in a statement to CNN after the altercation.

GOP Reps. Markwayne Mullin of Oklahoma and Steve Womack of Arkansas yelled at Capitol Police when they were forced to go through the metal detectors. Womack shouted, “I was physically restrained,” and Mullin said, “it’s my constitutional right” to walk through and “they cannot stop me.”

Pelosi on Wednesday proposed a new rule imposing stiff fines on members who refuse to follow new security rules. The fines — which will be deducted from members’ salaries — will be $5,000 for the first offense and $10,000 for the second offense.

“It is tragic that this step is necessary, but the Chamber of the People’s House must and will be safe,” Pelosi said in a statement.

But even some Democrats are unhappy with the extra security because it has led to longer lines and members being forced to be within six feet of one another.

“I’m more likely to die of Covid because I got it from a colleague than I am to die because a colleague shoots me,” Rep. Filemon Vela, Democrat of Texas told CNN.

Although the work of Capitol Police and law enforcement was vital to dismantling the threat against the Capitol, videos of officers wearing MAGA hats and taking selfies with rioters have raised deeper concerns about the sanctity of the police force.

“There were those acts of heroism, but next to that, there were also attacks of betrayal” Ocasio-Cortez said. “And to run in the nation’s Capitol and not know if an officer is there to help you or to harm you is also quite traumatizing.”

Democratic Rep. André Carson of Indiana also shared how law enforcement failed him because he had to learn through press reports of court proceedings that he was the target of a man accused of bringing bombs and an arsenal to the Capitol last week. Prosecutors found Carson’s name on a handwritten note in the possession of Lonnie Leroy Coffman whose truck was parked near the Capitol for hours last Wednesday and contained guns and bombs. Next to Carson’s name, the note read, “one of two Muslims in House of Reps.” Carson is Muslim.

“It is extremely disturbing to learn from press reports that I was one of several individuals identified in a list of ‘good guys’ and ‘bad guys’ targeted for attacks,” Carson said in a statement provided to CNN. “As a former law enforcement officer, it is especially disappointing to see the failure of law enforcement officials, including the US Capitol Police, to notify individuals like myself that we were targeted and at risk from the indicted terrorist and his co-conspirators.”

Little information from investigation so far

As all eyes turn to preparations for the inauguration, there is still little information known about the ongoing investigation into the breakdown of intelligence that led up to January 6, giving room for members to start raising their own theories about what happened.

Democratic Rep. Mikie Sherrill said on Facebook Live on Tuesday that she believes members of Congress led rioters around the Capitol the day before the violent attack.

Following her remarks, Sherrill told reporters on Capitol Hill she is requesting an investigation into those allegations.

Until more details about what happened are known, members continue to air out their grievances about the investigation publicly.

Democratic Rep. Brad Schneider of Illinois, who was among the members to test positive for Covid after taking shelter as rioters took over the Capitol on Wednesday, told CNN he is extremely frustrated by the lack of information coming from Capitol Police as to what went wrong and what changes will be made as a result of the insurrection.

“I am frustrated, extremely frustrated that we have not had those briefings, not just us but to the American people. What happened, where it broke down, what we know, what we’re learning from that, you get more briefings, from a local robbery than we’ve gotten on this,” Schneider said.

A high-level Democratic aide echoed to CNN, “for every suspicious package on the Hill I will get 10 emails in real time. Then when it comes to this biggest security breach in recent time, we hear very little.”

This story has been updated with additional developments Wednesday.

CNN’s Daniella Diaz and Manu Raju contributed to this report.

SpaceX capsule is bringing some Bordeaux wine back to Earth