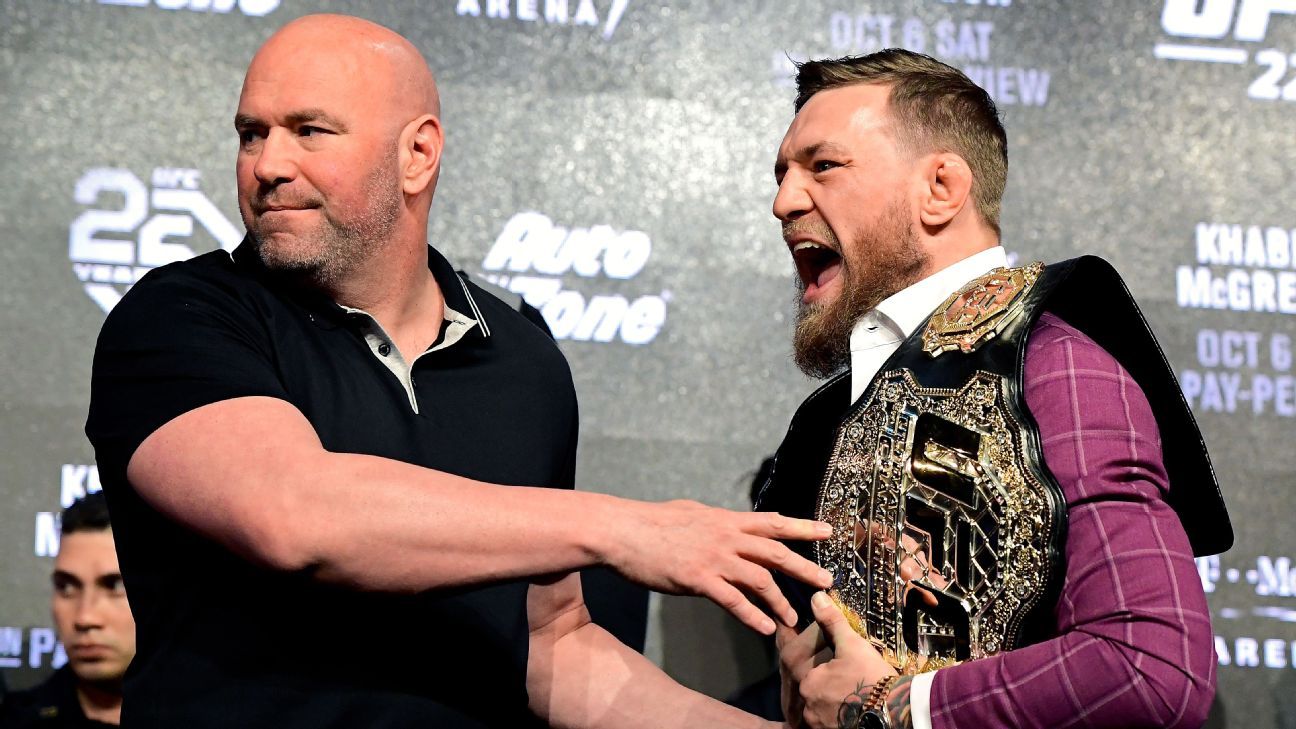 
UFC president Dana White says his relationship with Conor McGregor is solid going into 2021, after hitting a “bad place” in the second half of last year.

The relationship between the UFC and McGregor started off on a high note in 2020, as McGregor headlined the UFC 246 pay-per-view against Donald “Cowboy” Cerrone on Jan. 18. He knocked out Cerrone in just 40 seconds. McGregor had said he intended to stay active with three fights in 2020, but it ultimately ended up being his only appearance of the year.

Conor McGregor will return to the Octagon for the first time in a year in the UFC 257 main event. The former two-division UFC champ will take on Dustin Poirier in a fight that could decide the next lightweight title challenger. The bout also is a rematch from their meeting at UFC 178 in September 2014, a first-round TKO victory for McGregor.

That lack of activity led McGregor to announce on social media on June 7 that he was retiring, although few expected that to last.

In September, a disgruntled McGregor released screenshots of private messages with White, showing he’d suggested several dates and opponents for fights in 2020. McGregor’s suggestions did not come to fruition for a multitude of reasons, ranging anywhere from venue availability, scheduling, the COVID-19 pandemic and a disagreement on one of McGregor’s proposed opponents.

White, who referred to McGregor’s actions as “one of the dirtiest things you can do” at the time, said the relationship has since been repaired, and said he was most bothered by McGregor pulling UFC veteran Diego Sanchez into the back-and-forth, by revealing the UFC was against pairing those two last year.

“We were in a really bad place then, I was really upset,” White said. “It wasn’t because he put out private messages. We were talking about another fighter. And I like Diego Sanchez. I have a lot of respect for Diego Sanchez. I care about Diego Sanchez. I talked to Diego face-to-face about it, and being the great human being he is, we’re all good.

“I was really upset with Conor, but we fixed that and now we’re all good.”

If the UFC and McGregor continue to work on the same page, 2021 could shake out as one of the biggest years of the Irish superstar’s career.

It’s been four years since McGregor fought more than once in a single calendar year, however White is hopeful that streak will snap in 2021. According to White, he believes the Irish star’s motivation and focus are similar to what they were in 2016, when he fought three times and claimed his second UFC championship by defeating Eddie Alvarez at UFC 205.

Dana White tells Brett Okamoto that he intends to sit down with Khabib Nurmagomedov to possibly convince him to take one final fight.

“The questions are always, ‘This guy is so rich, how hungry is he?” White said. “There’s nothing more exciting or fun than a motivated Conor McGregor, when his head is in the right place. And you can tell when he is and when he isn’t, and right now, he’s in. My conversations with Conor, I know when the real Conor is here and the other Conor is here, and believe me when I tell you, the real Conor is here.

“If something happened to Dustin Poirier, he is the Conor McGregor right now that doesn’t give a s— who we put in that fight. He’s going to be, ‘Who’s ready? Who you got? I’m going to the gym, tell me who’s showing up on Saturday.’ He’s that guy right now. That Conor McGregor is back.”

And if McGregor beats Poirier at UFC 257 and maintains that level of focus, White would like to see him vie for the lightweight championship in his next bout.

“The way this kid is right now, mentally, physically, emotionally, this kid is on and ready to fight,” White said. “I would love to see him focus on what he can do here in the UFC, whether that’s take another shot at the title against Khabib or fight for the title against somebody else if Khabib retires, and defend that title.”

White said he’s also looking to book Jorge Masvidal vs. Colby Covington in the the “next months.” And he’s not opposed to TJ Dillashaw fighting for a title in his first bout back from a drug-related suspension, which ends in February. As far as strawweight champion Zhang Weili, White said it’s still likely she’ll fight Rose Namajunas or Carla Esparza in the first quarter of 2021, and he said that fight could take place in Asia. Zhang is the UFC’s first and only champion from China. White also said he’s considering cards in Florida and Texas. There are less restrictive guidelines in place for fans in those states.

But first up is the return of McGregor, and White — who’s not interested in McGregor pursuing another lucrative boxing match anytime soon — is excited to see the biggest star in UFC history back in action.

“He’s hitting me up and asking me questions about the layout of the arena, the walk-in, all these types of things that he’s interested in knowing about right now,” White said. “He’s all in on this thing.”

Canadiens up, Blackhawks down, and six more takeaways from the NHL’s opening night