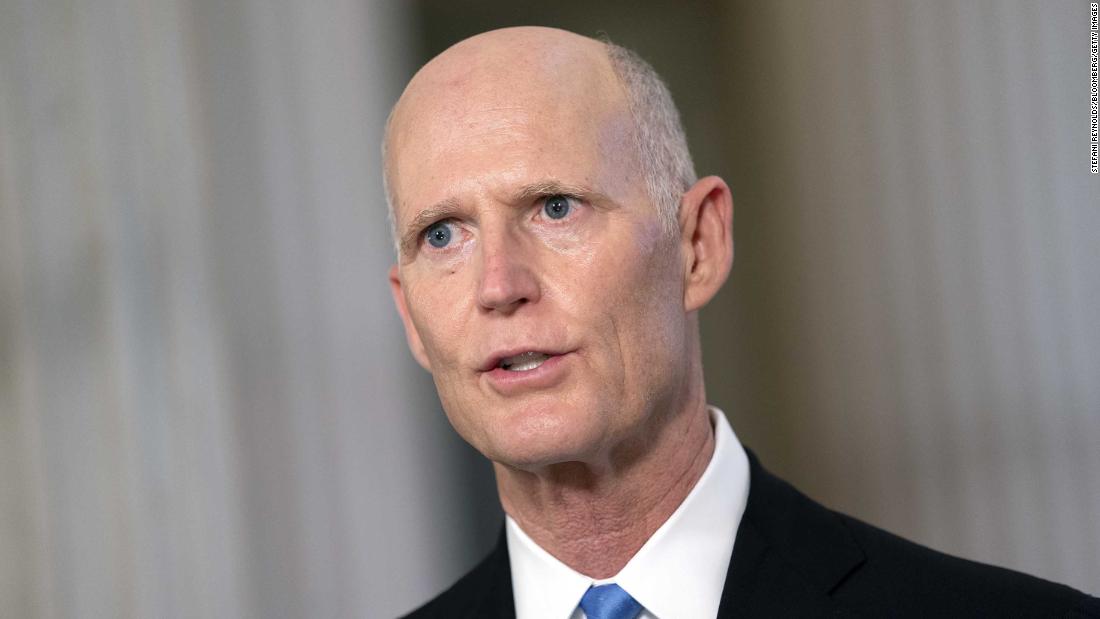 “He’s not the one who made the decision to breach this Capitol,” Scott said.

After losing the House, Senate and White House in four years, Trump remains broadly popular within the GOP. But the riot has led a small group of House Republicans — including Rep. Liz Cheney, the No. 3 in GOP leadership in the chamber — to support his impeachment. Republican senators are now seriously considering whether to convict him of the charge, “incitement of insurrection,” after five people died in the attack.

The Florida Republican told CNN that he wished Trump “responded faster” to quell the violence, calling the riot “unacceptable” and “un-American” and for some of the insurrectionists to be prosecuted.

But he did not hold Trump accountable for the attack, even though the President urged his supporters in a speech before the riot on January 6 to march to the Capitol, to “fight like hell” to save the country, and to “stop the steal.” Trump said then that he would “never give up” and “never concede.”

“I think it’s irresponsible and false to say the President told people to break into the Capitol,” Scott said. “He didn’t do that.”

‘Republicans are at a fork in the road’

The party’s divide extends to the money machine that keeps it in office.

The US Chamber of Commerce, corporate political action committees and major conservative donors are reevaluating whether they will donate to the 147 Republican members of Congress who objected to certifying the presidential election on the day of the attack in a deluded bid to overturn the results. Those members include Scott and House Republican Leader Kevin McCarthy, who cited voter integrity concerns.

The business community has recoiled in horror at the violence, potentially impairing Republicans’ fundraising effort to flip both the House and Senate in 2022.

The donor revolt is “going to make every Republican’s job that much harder,” said Ken Spain, a GOP strategist. Spain said the corporate pushback now under way illustrates a fissure between corporate America and rank-and-file Republicans on issues such as free trade that has only grown wider in recent years.

“The party was already becoming a more populist working-class party and Trump accelerated that,” he said. “Republicans are at a fork in the road, and the direction that they choose to take in the coming days and weeks is going to have a profound impact on the future of the party.”

Scott, a former governor who voted last week against certifying Biden’s win, downplayed the donors’ outcry, saying that he conducted fundraising meetings between Thursday and Monday and “everybody’s excited to help.”

“Corporations, individuals, they have a choice,” the senator said. “If you believe in a big government, less freedoms, socialism, you ought to actually put all your money into supporting the Democrats. If you want opportunity, and lower taxes and less government, you’re going to support Republicans.”

Some major American companies, including Amazon and CNN’s owner AT&T, have announced they will withhold PAC donations to those who objected to certifying the election results. Many other firms, ranging from Coca-Cola to UPS, have suspended political donations across the board.

Business PACs are significant players in politics, accounting for more than $360 million in federal contributions during the 2020 cycle — with about 57% of the money flowing to GOP candidates, according to the nonpartisan Center for Responsive Politics.

Americans for Prosperity, the political arm of the influential network affiliated with Kansas industrialist Charles Koch, has warned it could withdraw financial support for lawmakers over their actions in the runup to the January 6 siege, although even before last week’s insurrection, Koch officials had signaled they wanted to move away from strictly partisan politics.

“Lawmakers’ actions leading up to and during last week’s insurrection will weigh heavy in our evaluation of future support,” said AFP CEO Emily Seidel in a statement.

The US Chamber of Commerce also warned that some lawmakers could lose financial support over their efforts to thwart the transfer of power but declined to single them out.

“We will take into account the totality of what candidates and elected officials do, including the actions of last week, and importantly, the actions in the days ahead in determining whether or not we support them,” said Neil Bradley, the chamber executive vice president, on Tuesday. “I actually want to be very clear: There are some members, who by their actions, will have forfeited the support of the US Chamber of Commerce.”

But when pressed on what Missouri GOP Sen. Josh Hawley, who led the objection to the certification of the election in the Senate, would have to do to earn additional donations from the Chamber, Bradley said they would evaluate how members conducted themselves last week and in the days to come.

Some major conservative donors have also focused their ire on the individual Republicans they view as having helped to instigate last week’s events, particularly Hawley. Missouri businessman Sam Fox, who donated $300,000 to a super PAC that aided Hawley’s election in 2018, said in a statement that the senator “can certainly forget about any support from me again” after last week’s events.

“Sen. Hawley engaged in act of reckless pandering,” said Fox, who served as US ambassador to Belgium under President George W. Bush. “He helped put the country on a path that has ended in five deaths and in disgrace for himself and for the nation.”

Hawley aides did immediately respond to a request for comment. The senator wrote an op-ed for the Southeast Missourian newspaper explaining why he continued to object after the violence in the Capitol. “The reason is simple: I will not bow to a lawless mob, or allow criminals to drown out the legitimate concerns of my constituents,” Hawley wrote.

Some top donors have remained silent in the aftermath of the riot.

A spokeswoman for Ken Griffin, a billionaire hedge-fund manager and one of the GOP’s biggest donors, declined to comment on whether he would review his donation policy.

But others said they would stand by the Republicans in Congress. Dan Eberhart, an Arizona-based energy executive considering a bid against Democrat Sen. Mark Kelly in 2022, said, “I have been a big donor to Rick Scott in the past and plan to continue to be.”

Eberhart said disaffected donors will “make up with Republicans pretty quickly” if the Democrats, who will soon control the White House and both chambers in Congress, “overreach” in their agenda. “Donors will want the counterweight that Republican provide. More money may go to the leadership PACs, but it will still go to Republicans if those are the policies donors support,” he added.

After House Republicans picked up seats in 2020 and with the Senate split 50-50 — and Vice President-elect Kamala Harris set to be the tiebreaker — eyes will turn to next year’s midterms. The party out of power typically does well in midterms, and in 2022, Senate Republicans will have more seats to defend than the Democrats, including in battleground states like Florida, Pennsylvania, North Carolina and Wisconsin. Democratic senators could have tough races in Arizona, New Hampshire, Nevada and elsewhere.

Scott told CNN that he has three goals: presenting a “clear choice” to the country on how a Republican and Democratic Senate differ, raising more money and recruiting quality candidates. He said he hoped Republican Wisconsin Sen. Ron Johnson would run for reelection, and that the GOP has “a lot of opportunities to pick up additional seats.”

But Trump and his legacy will continue to shape the perceptions of the party in the next election. Already, Ben Wikler, chair of the Democratic Party of Wisconsin, announced on Wednesday that the party is going up with a six-figure ad buy that blames Johnson for inciting the riot at the Capitol.

The Florida senator said it’s up to Trump and the Senate GOP candidates whether the then-former president hits the campaign trail on their behalf in 2022.

When asked if he blamed Trump for losing the Senate, Scott said, “My focus is on ‘how do we go forward?’ “

US has conceded too much to Taliban, says Afghan vice-president