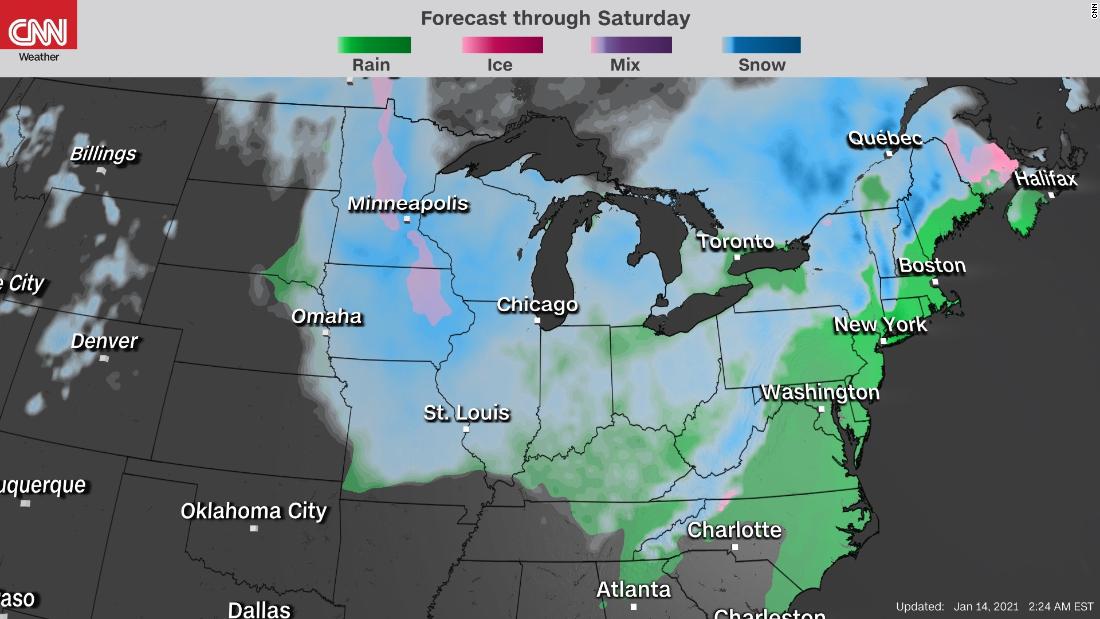 Winds are expected to gust up to 65 and 75 mph across the Plains, combining with snow to create blizzard conditions for nearly 2 million people in the Upper Midwest.

The storm already left some 700,000 customers in the Pacific Northwest without power. Parts of eastern Montana and the Dakotas on Wednesday reported near hurricane-force winds amid springlike warmth.

“The strong winds will usher in more seasonal conditions with temperatures generally in the 30s to low 40s on Thursday,” CNN Meteorologist Taylor Ward said.

As the storm surges toward the Midwest, cold air behind the system will be greeted by enough moisture to unleash persistent snowfall, gusty winds and periods of blizzard-like conditions in parts of Minnesota, Iowa, Wisconsin and the Eastern Dakotas.

“Travel may become impossible due to winds and zero visibility with the blizzard conditions,” CNN Meteorologist Chad Myers warns.

The system is in no rush to move through the region, however, as the impacts could linger well into Friday for millions across the Great Lakes.

Prolonged snowfall, accompanied by periods of heavy lake-effect snow on the south shores of Lake Superior, will lead to widespread coverage of 3 to 6 inches of snow in the Upper Midwest, with the highest totals likely ranging between 6 and 10 inches across Minnesota and northern Wisconsin.

As the system advances eastward Thursday night into Friday, periods of snow, rain and a wintry mix will impact parts Illinois, Indiana, Michigan and Ohio.

Rain and snow reach the Northeast by Friday night

A secondary low pressure system will form along the cold front as the system reaches the East Coast by Friday night into Saturday morning.

While it promises to bring a soggy start to the weekend for the Northeast, the majority of the area will see rain, not snow, thanks to relatively mild January temperatures.

Places like New York City and Boston will be in the mid- to upper 40s Saturday, with a half inch to an inch of rain, as opposed to the several inches of snow they would see if temperatures were colder.

Snowfall Friday night and Saturday will be limited to Upstate New York and northern New England. For the most part, even those locations are only expected to see about 2 to 5 inches, though a few of the favored, higher elevation spots could see over a half a foot of snow.

The storm earlier in the week gave several cities in the Pacific Northwest the wettest start to any year on record. And as of early Thursday morning, there were nearly 245,000 customers still without power in Washington, Oregon, Idaho and Montana, according to data from PowerOutages.US.

Generating the storm’s powerful winds has been the difference in air pressure between a strong high-pressure zone in the Southwest and the incoming low from the Northwest.

Opinion: Prepare for a jobs boom in 2021