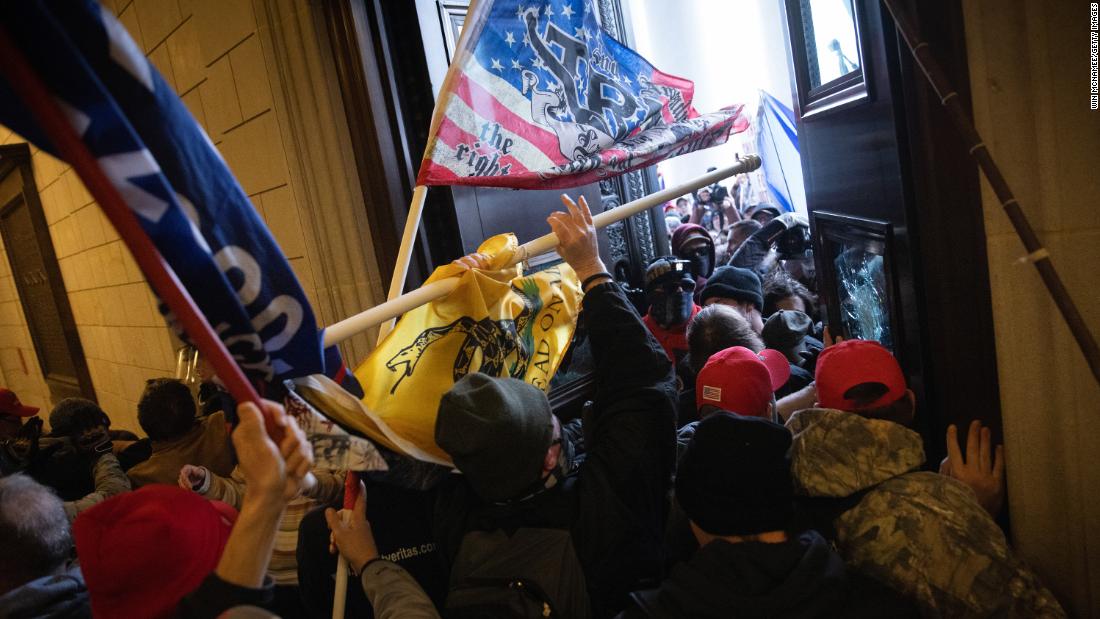 “We know who you are if you’re out there, and FBI agents are coming to find you,” he said during an inauguration security briefing at Federal Emergency Management Agency headquarters in Washington with Vice President Mike Pence.

Wray’s comments come as federal investigators are chasing thousands of leads in twin efforts to prosecute people involved in last week’s attack on the US Capitol and to try to prevent feared follow-up attacks in Washington and around the country.

The challenge, FBI and Justice Department officials say, is “unprecedented” and Wray addressed the duality of the current situation in his comments Thursday by speaking directly to those who may be considering taking part in violent acts going forward.

“My advice to people who might be inclined to follow in the footsteps of those who engaged in the kind of activity we saw last week is stay home,” he said. “Look at what’s happening now to the people who were involved in the Capitol siege.”

Yet, while federal law enforcement officials have sought to reassure the American public in recent days that they are up to the task on both fronts, their public remarks also lay bare the enormity of the challenge they face in tracking potential threats to not only the nation’s capital, but across the country.

Even as the FBI and its law enforcement partners continue to track down suspects from last week’s attack, Thursday’s briefing from Wray offered yet another indication that officials are increasingly worried about more violence in the days ahead.

CNN previously reported that federal law enforcement officials are warning that domestic extremists are likely more emboldened to carry out attacks on President-elect Joe Biden’s upcoming inauguration and throughout 2021 after seeing the success of last week’s siege on the US Capitol.

In a series of bulletins and calls with local partners this week, federal law enforcement agencies issued an urgent call for assistance in securing the nation’s capital as the inauguration nears, and painted a dire picture of potential threats leading up to January 20.

State officials around the country are also ramping up security. In Oklahoma, House members were told not to come to the state capitol this weekend due to concerns about possible protests. Fencing has been erected around the Arizona state capitol “out of an abundance of caution” and Oregon State Police will be assisted by the National Guard as they deal with possible demonstrations.

On Thursday, Wray reiterated that the FBI has “confidence” in its preparation and security surrounding the inauguration next week.

“Our posture is aggressive. It’s going to stay that way though the inauguration. So in that vein, we and our partners have already arrested more than 100 individuals for their criminal activities in last week’s siege of the Capitol and continue to pursue countless other related investigations.”

But Wray also acknowledged that the FBI has been seeing “extensive” chatter surrounding the inauguration and said “one of the real challenges in this space is trying to distinguish what is aspirational and what is potential.”

“We’re monitoring all incoming leads — whether calls for armed protests, potential threats that grow out of the January 6th breach of the Capitol or other kinds of potential threats leading up to Inaugural events and various other targets,” he said.