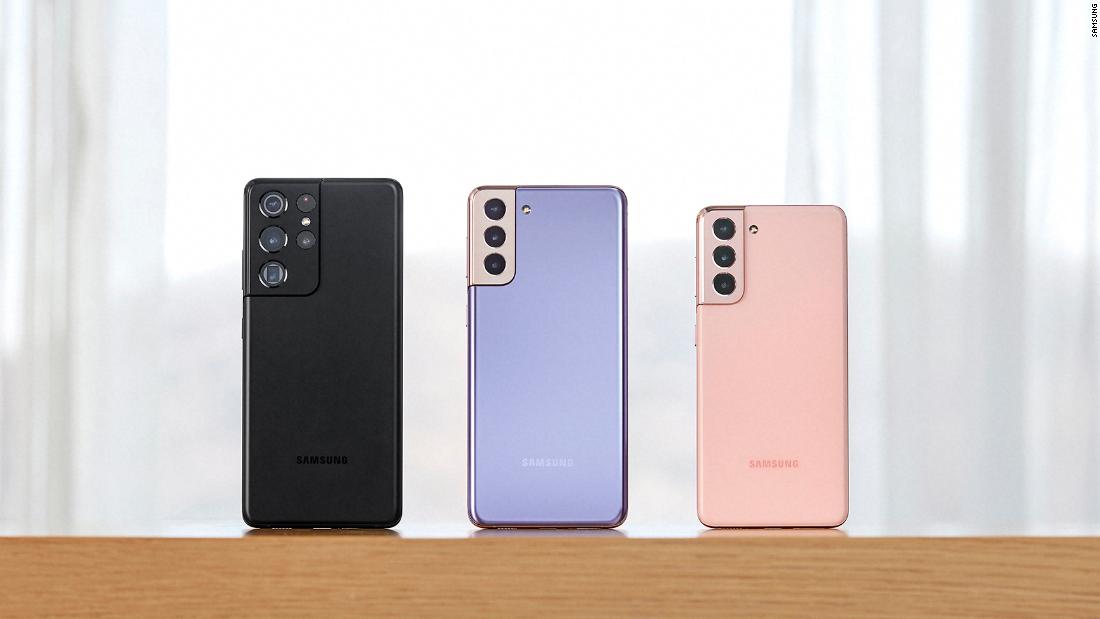 In a digital press conference on Thursday, with the tagline “Be Epic In Every Way,” the company demoed its three new Galaxy S21 smartphones in varying sizes — a 6.2-inch Galaxy S21, a 6.7-inch S21+ and a 6.8-inch Ultra. Samsung showed off its faster Qualcomm Snapdragon 888 processor, advanced AI-powered cameras, new colors in a matte finish and premium earbuds you can buy to go with it. All models come with built-in 5G capabilities.

The Ultra is clearly Samsung’s standout product. While the Galaxy S21 and 21+ feature a new flat high definition screen (2400 x 1080), the Ultra model takes it a step further with a super high-resolution display (3200 x 1400). The Ultra has four rear cameras, compared to the three rear cameras on the other two devices. The Ultra’s four cameras are a 12-megapixel ultra-wide lens for shooting landscapes or group shots, a 108-megapixel wide-angle lens for clarity and color accuracy and two 10-megapixel telephoto lenses that work together to zoom even more into shots.

The S21 and S21+ (available in purple, black, gray, white and pink) and the S21 Ultra (available in black, silver, brown, titanium and navy) will be available for pre-order on Thursday. All devices start shipping on January 29.

The three models support the S Pen stylus used in its Note series phones, but all three models ship without a charger, which Samsung says is for sustainability reasons. Apple made a similar movie with the iPhone last year.

The upgrades are indeed improvements to the Galaxy lineup, most significantly to the camera technology, but Samsung’s “epic” motto feels off, both because the changes are more evolutionary than revolutionary and because of the backdrop to the announcements. Life feels anything but epic: More people are stuck inside, the news cycle is exhaustive and unemployment levels remain high. Let’s be honest, the day is a win if we change out of sweatpants.

In a nod to our new normal, Samsung is throwing in some features that may be better geared for life at home during the pandemic. This includes a default blue light filter that could help reduce eyestrain when you’re doomscrolling. The phones also offer deeper integration into home automation products.

In addition to the phones, Samsung introduced a premium version of its wireless earbuds, called Galaxy Buds Pro, with enhanced noise cancellation and an ambient sound feature. Ahead of the event, a Samsung executive in a product demo likened working from home to being at a construction site — dogs barking, a toddler running around and appliances humming in the background. The new wireless earbuds have three built-in microphones that separate the user’s voice from the background noise so audio can come in clear during a call, even if it’s a chaotic background.

Meanwhile, ambient sound lets you hear the world around you on top of what you’re listening to. If you’re using them on Zoom call, you can still hear your kid in the background. The two features work together intelligently, too. When your child inevitably comes to talk to you during your meeting, EarBuds Pro will detect them speaking, lower the volume and automatically switch to the ambient noise setting so you can hear him better.

The set, which comes in purple, black and silver, costs $199 — $50 less than the rivaling Apple AirPods Pro. The company claims it gets 5 hours of playback and 13 hours of reserved power when fully charged.

Samsung’s annual Galaxy event usually coincides with Mobile World Congress in Barcelona in February — the first major tech event that was canceled last year due to the pandemic — but the company moved it up to land on the last day of this year’s all-digital CES consumer tech conference.

Following a long thread of rumors, Samsung also unveiled a Bluetooth location tag called Galaxy SmartTag that lets you locate non-connected devices with a physical tag that attaches to keys, a bag or a pet’s collar.

Aaron Rodgers has just 89 picks in 6,587 passes — and he hates every one of them