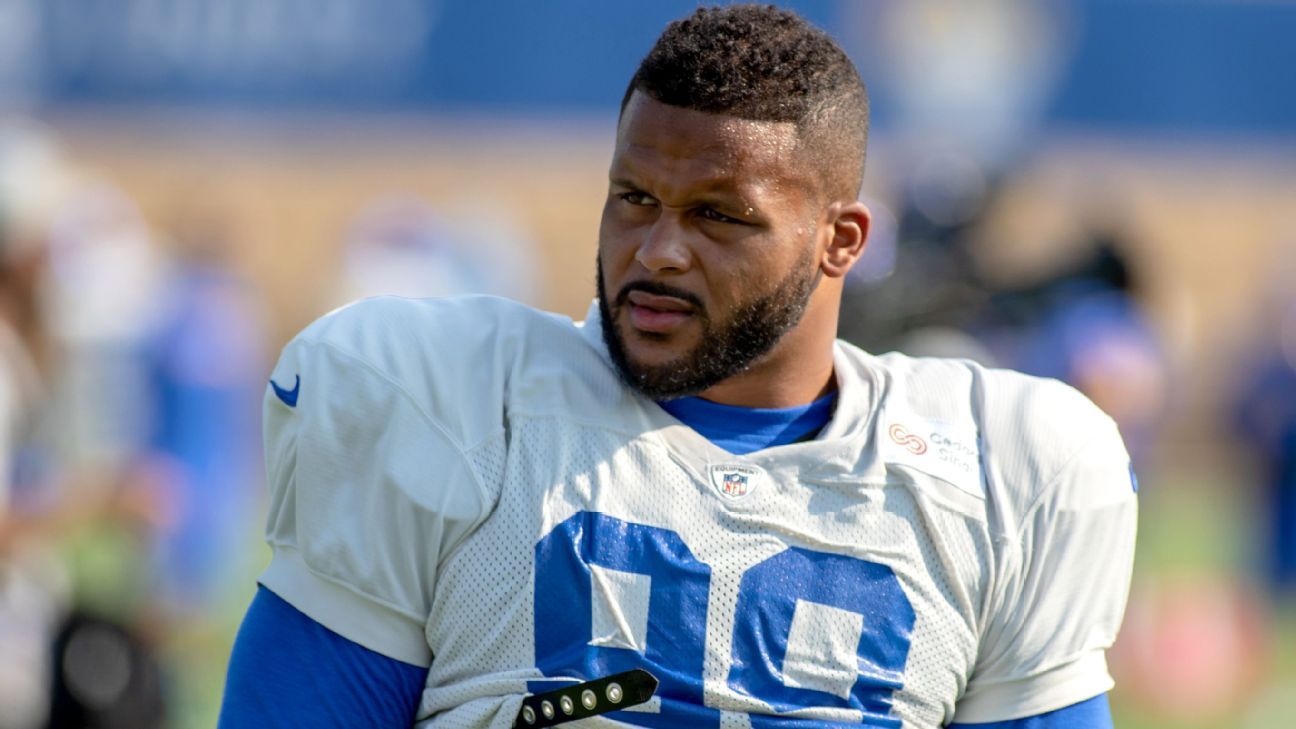 The Cleveland Browns get back their head coach, Kevin Stefanski — who missed the wild-card game due to COVID-19 — for Sunday’s game against the Kansas City Chiefs.

Quarterbacks continue to deal with injuries, most notably in Los Angeles, where Jared Goff is recovering from surgery on his throwing-hand thumb and John Wolford is recovering from a stinger. Rams defensive tackle Aaron Donald is also dealing with a rib injury suffered in the wild-card round but is expected to play.

Our NFL Nation reporters update the top injury question for every team heading into divisional weekend:

Rams: The Rams have no shortage of injury concerns ahead of Saturday’s divisional-round playoff against the Packers. Defensive tackle Aaron Donald is dealing with a rib injury but is expected to play, according to Rams coach Sean McVay. “Unless something unforeseen happens,” McVay said, “the terminator will be ready.” Receiver Cooper Kupp has bursitis in his knee and is day-to-day, and then there’s the quarterback situation. Jared Goff is another week removed from Dec. 28 surgery on his throwing-hand thumb and John Wolford is recovering from a stinger, but McVay isn’t saying which QB is on track to start against the Packers. — Lindsey Thiry

Packers: The Packers are on COVID watch now after recently signed tackle Jared Veldheer’s positive test. A contact tracing investigation deemed no close contacts were also taken out because of it, but the Packers will be holding their breath awaiting the daily testing between now and Saturday’s playoff game against the Rams. They’re otherwise healthy as far as football injuries go – other than the obvious fact that they’re not getting All Pro left tackle David Bakhtiari back from his torn ACL. Davante Adams, who missed both bye week practices last week, wasn’t even listed on the injury report. — Rob Demovsky

Ravens: Three-time Pro Bowl corner Marcus Peters looked healthy when he made the game-clinching interception in the final two minutes of Sunday’s wild-card victory in Tennessee and hopped on the Titans logo. But Peters, who has been among the most durable cornerbacks in the league, missed Tuesday’s walk-through and Wednesday’s practice because of a back injury. Peters’ availability looms large in this matchup against the Bills. Josh Allen has completed an NFL-high 302 passes to wide receivers — 22 more than any other quarterback. If the Ravens are without their No. 2 cornerback, they would rely on Jimmy Smith and Anthony Averett to fill the void. — Jamison Hensley

Bills: Can wide receiver Cole Beasley’s knee hold up at least one more week? The Bills’ slot receiver made it through the wild-card round without any setbacks after missing Week 17 with a knee injury, and Buffalo says he should be available for Saturday’s game against the Ravens. The Bills will need their second-leading receiver as a safety valve against Baltimore’s aggressive blitzing scheme. — Marcel Louis-Jacques

Browns: All-Pro right tackle Jack Conklin sat out Wednesday’s practice because of a hamstring injury that knocked him out of Sunday’s playoff win over Pittsburgh. Coach Kevin Stefanski has termed Conklin “day-to-day,” but the Browns are hopeful he’ll be ready in time for Cleveland’s divisional road trip to Kansas City. — Jake Trotter

Chiefs: Running back Clyde Edwards-Helaire has a chance to play on Sunday against the Browns. He practiced for the first time since injuring his ankle and hip in a Week 15 game against the Saints. Edwards-Helaire was a limited participant on Wednesday. The Chiefs could use a healthy Edwards-Helaire, who has more big-play ability than either of their other top backs, Darrel Williams and Le’Veon Bell.— Adam Teicher

Buccaneers: Inside linebacker Devin White and defensive lineman Steve McLendon both returned from the reserve/COVID-19 list after missing the past two games, but running back Ronald Jones did not practice Wednesday due to a quad injury that forced him to miss last week’s wild-card game. “I anticipate and hope he can go tomorrow,” coach Bruce Arians said of Jones. Right guard Alex Cappa, who suffered a fractured ankle against Washington, will be replaced by Aaron Stinnie this week. — Jenna Laine

Saints: Defensive end Trey Hendrickson practiced on a limited basis Wednesday after missing last week’s game with a lingering stinger. Not only did Hendrickson lead the Saints in sacks this season with 13.5, but he was especially huge in the two wins over Tampa Bay with a combined three sacks (plus a sack-fumble that was negated by penalty). Versatile offensive chess piece Taysom Hill did not practice Wednesday because a knee injury that temporarily sidelined him last Sunday, but it’s too early in the week to predict his status. — Mike Triplett