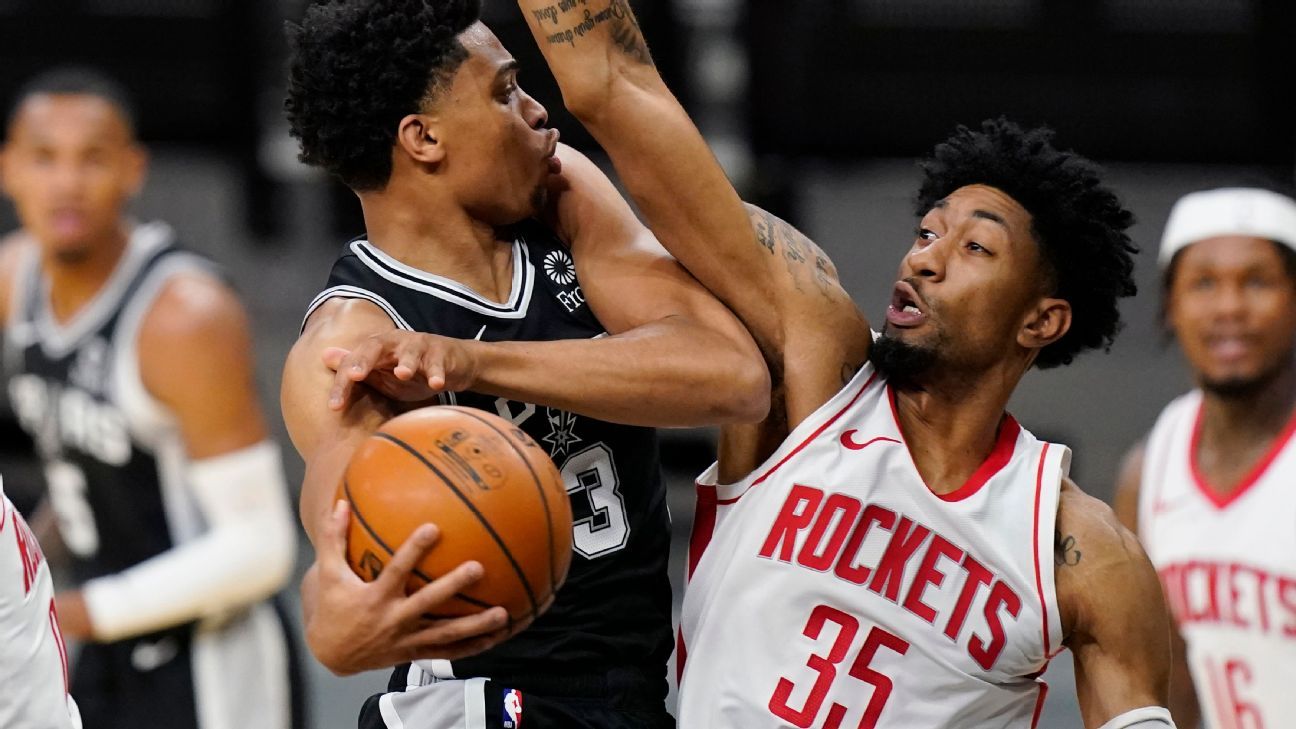 The Rockets, who had only nine available players due to injuries and the pending arrivals of newcomers, capped what first-year coach Stephen Silas called “a crazy 48 hours” with a 109-105 road win over the San Antonio Spurs.

It was an especially satisfying victory for a team that heard Harden, the longtime franchise cornerstone, publicly declare that the Rockets were inadequate and couldn’t “be fixed” after a lopsided loss to the Los Angeles Lakers on Tuesday night, when the 2018 MVP was aware that trade talks had intensified and a deal could be done soon. He was sent to the Brooklyn Nets, his preferred destination, in a three-team deal the next day.

“The whole team came together,” said center Christian Wood, who led the Rockets with 27 points, 15 rebounds and 3 blocks in the win. “I guess you could look at it as a blessing in disguise. Today, we all played together. Everybody was playing hard.”

The Rockets held a team meeting — minus Harden — after their Tuesday loss to the Lakers. They “drew the line there,” as rookie forward Jae’Sean Tate put it, promising one another to shut out the noise from the Harden saga and put up a fight after a disappointing start to the season.

“We came together, we talked about it, and it was on display tonight — just our togetherness, our junkyard dog mentality,” Tate said. “That’s what we wanted from the start of the season. There’s a lot of guys — on the team and coaching staff and the GM — everybody has so much to prove.”

The Rockets, who were 2-6 with Harden in uniform, are now 2-0 this season when the perennial MVP candidate does not play. They managed to win this game despite playing without any proven primary ball handlers, with Harden gone. Trade acquisition Victor Oladipo has yet to join the team, and John Wall (sore knee) and Eric Gordon (lower leg tightness) were out due to injuries.

The nine available Rockets have a combined salary of $34.9 million, almost $6 million shy of what Harden is making this season.

“Every guy on the team is confident we can go out there and get the job done,” said Sterling Brown, who is making the veterans minimum and had 23 points and 7 rebounds in the win. “That just is what it is. A lot of things were going on the last few years and early this year that I don’t have no control over. … I just heard a few things and didn’t know the truth or whatever was involved.

The 6-foot-4, 230-pound Tate, who played in Australia for two seasons after going undrafted in 2018, filled the void with a point-forward performance that prompted Silas to make a postgame comparison to another wide-bodied lefty, former New York Knicks and Charlotte Hornets star Anthony Mason. Tate had 13 points, 5 rebounds and 10 assists, becoming the first Rockets rookie since Steve Francis in 2000 to record a points-assists double-double. He also made several critical defensive plays.

“He had to do a little bit of everything,” Silas said. “Whether it was run the offense or post guys up or switch onto primary scorers, he did it all tonight. It was really fun to watch.”

The Rockets played with a joy and a passion that they lacked while Harden’s desire to be traded — as well as his efforts to make that happen, such as holding out of training camp — loomed over the franchise. It was a strong first step for a team that now has a “real direction,” as Gordon said after the morning shootaround, with the resolution of the Harden saga.

“It’s something to build off of for sure,” Silas said. “We don’t want to make too much out of it, but it was a short-handed, tough-minded, gritty group that found a way to win without a primary ball handler on the floor. Against a very good team. On the road. So all of those combine to make it a special win, but something that we need to build on and not just rest in.

“Spirit is something I believe a lot in and talk a lot about, and we had spirit tonight. The guys were pulling for each other. They were resilient.”