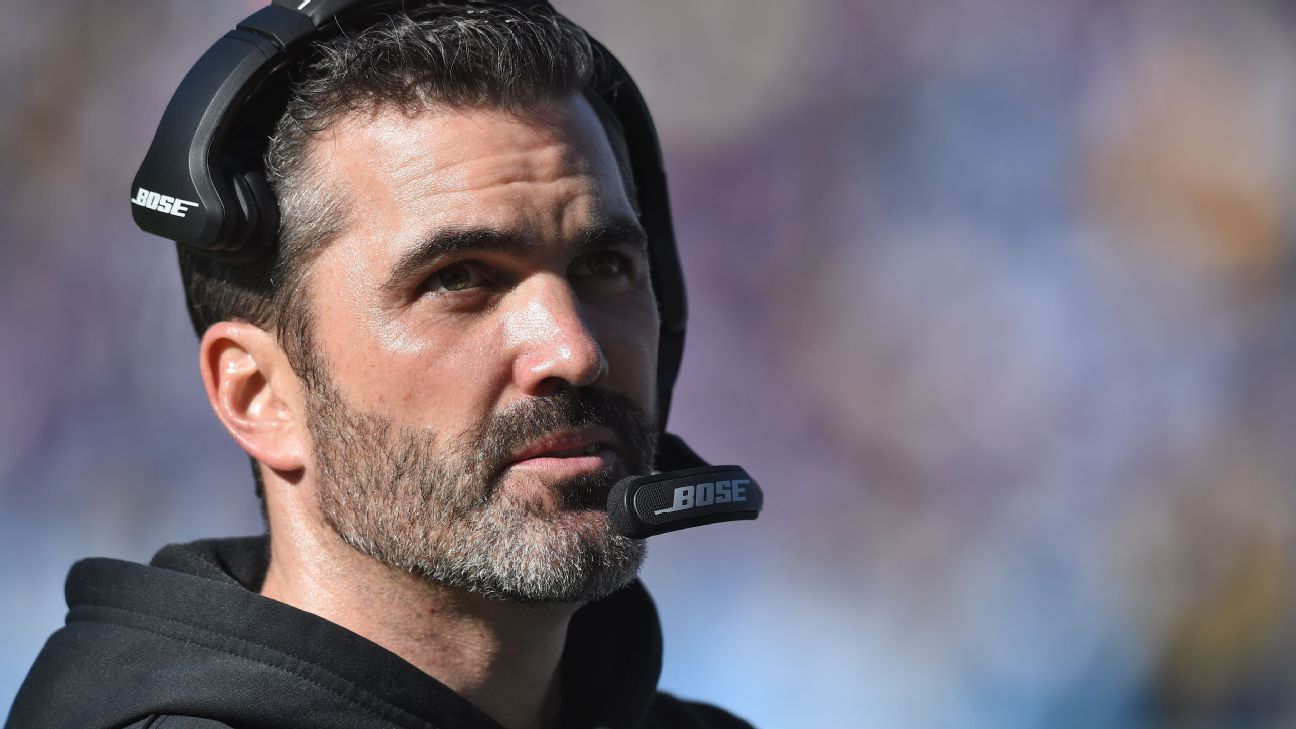 
BEREA, Ohio — During the 2017 season in Minnesota, Kevin Stefanski often would kick his starter out of the quarterback meeting room.

Stefanski, then the Vikings quarterbacks coach, was into the TV show Game of Thrones. So too were quarterbacks Sam Bradford, Taylor Heinicke and Teddy Bridgewater.

But Case Keenum was not. And so, whenever the discussion would veer from dissecting defense to dissecting the Dothraki, Keenum was ordered to leave.

“I’d literally be out of the meetings for like 20 minutes,” said Keenum, now Cleveland’s backup quarterback, “while they were breaking down the latest episode of Game of Thrones.”

In almost every way, Stefanski defies the caricature of the old-school NFL head coach. He never played in the league and attended an Ivy League school. He despises talking about himself, yet lights up when asked about his assistants. He almost never loses his cool, underscored by a subtle tendency on the headset to defuse a game’s tensest moments with his dry sense of a humor.

“Sometimes you’re like, ‘Did he just crack a joke?’ He can work one into any situation,” said tight ends coach Drew Petzing, who came to Cleveland with Stefanski from Minnesota. “But Kevin is also extremely smart, very organized, willing to understand and very calm, cool and collected. He’s not going to yell or scream or give you that absolutely epic speech from ‘Any Given Sunday.’ That’s not maybe what he’s the absolute best at.

“Now does that mean he doesn’t motivate guys and drive guys and push guys? No. But he understands how to do that, knowing his personality and how people view him. He’s very self-aware, which is a great quality to have.”

Because of those qualities, the Cleveland Browns believe they’ve finally have found their long-term head coach, having cycled through 11 others before him since returning to the league in 1999.

In his first year in Cleveland, the 38-year-old Stefanski has steadily guided the Browns — through an otherwise unprecedented year of chaos, which included him missing Cleveland’s playoff victory in Pittsburgh last Sunday with COVID-19 — to their best season in at least 26 years.

“Kevin is unflappable,” said Browns general manager Andrew Berry, also in his first season in Cleveland. “He’s the same person every day, even-keeled demeanor, fantastic with people. And you need that steady hand within your organization with the inevitable ups and downs and adversity that’s in any NFL season, let alone this one.”

Sunday, the Browns will face top-seeded Kansas City (3:05 p.m. ET, CBS), where Cleveland will take on the defending Super Bowl champs with a chance to advance to the AFC Championship Game for the first time since 1989.

As a result, Stefanski figures to be on the short list for NFL Coach of the Year — if not, at this point, the favorite to become the first Cleveland coach since Forrest Gregg in 1976 to win it.

All the while just being himself.

“You’re spot on with that one,” agreed quarterback Baker Mayfield, enjoying a resurgent season under Stefanski. “People don’t follow fake leaders. When you have a group of men doing this and everybody is counting on you, you can sniff out somebody who’s fake extremely quickly. That’s not the case here.”

Before the coin toss of every high school game, Stefanski had the same routine as captain for St. Joseph’s Prep in Philadelphia.

“In our best Scottish accents, I would look at him, and say, ‘Where are you going?’ And he would say, ‘I’m going to pick a fight,'” recalled Eddie Turner, one of Stefanski’s closest high school friends and wide receiver teammate, referring to the 1995 Mel Gibson film “Braveheart.” “And then I would say, ‘Well, we didn’t get dressed up for nothing.’”

As a Catholic League MVP safety and quarterback, Stefanski channeled William Wallace on the field.

“He was a tremendous hitter,” said his coach then, Gil Brooks, who still texts with Stefanski after almost every Browns game. “And a great leader.”

When it came to football and school, Stefanski was serious and diligent, eventually getting into Penn. But he was always busting chops as a sign of affection and pulling practice jokes. Driving an oversized station wagon, the fake wood paneling included, he would not hesitate to bump his buddies’ vehicles with the bumper for making fun of his car.

“He was not afraid to rise to any level of prank,” Turner said. “There were times in freshman Latin class he would get the guys to sing Boyz II Men for Mr. Z (the teacher) when Mr. Z came into the room, just to lighten the mood.”

That continued into college, while tending bar at Smokey Joe’s — referred to as “The Pennstitution” — with roommates and Penn teammates Jake Perskie and Pat McManus. Once when Perskie and McManus were out of town, Stefanski messed up their trip by leaving them a message he’d told the owner of the bar that they were covering the vacant shifts that night.

“He’s a ninja when it comes to practical jokes, and he can’t be got, either, because he doesn’t have an internal panic button. He’s ice-cold that way.”

That carried over to football, as Stefanski earned a starting job at Penn as a freshman.

“The first game, he was already calling the defense,” McManus said, “while the rest of us were still trying to remember the code to get into the locker room.”

As Penn coach Ray Priore, then its defensive coordinator, put it, “Kevin was another coach on the field. He was almost telepathic, like he could read my mind.”

Three years later, after the Quakers captured a second straight Ivy League title with a win over Cornell, Stefanski, who had worked his way back from another knee injury that year, marched his teammates straight to Smokey Joe’s, where they celebrated the trophy with the owner, still wearing their pads.

“Kevin was always the same guy,” McManus said. “Tore his ACL twice, but you wouldn’t even know he was hurt because he never brought it up. He’s always been so unflappable, never complained or whined, and when things would go wrong, he would just take control of it.”

Everything seemed to be going immeasurably wrong for the Browns last week heading into the playoffs.

Pro Bowl guard Joel Bitonio tested positive for COVID-19, making him unavailable for the trip to Pittsburgh along with cornerback Denzel Ward, who was already on the reserve/COVID-19 list. Then Stefanski tested positive, as well. On top of that, the Browns training facility was closed for three days to allow for contact tracing. Ultimately, Cleveland was able to practice only once before traveling to Pittsburgh.

Yet true to the identity of their head coach, the Browns never panicked. The night before the game, Stefanski reinforced that ideal in a team meeting over video from his basement in Cleveland, where he would watch the game.

“He said that he had confidence in this team. That he’s seen us win 11 games with his own eyes, and that he knows what this team is made of,” Keenum said. “And then he said, ‘I’m going to sit on my couch and watch it in the basement on my 60-inch TV. I’m going to have a pretty good view there. I’m going to see the defense tipping balls and us being there and catching them and getting turnovers.’ And man, if it didn’t happen early and often. Pretty awesome, it’s like he spoke it into existence.”

Including the Browns intercepting Ben Roethlisberger four times, Stefanski has been speaking this season into existence from the moment he got the job. At the beginning, he told his team “Embrace the Suck,” which included the annoyance of daily coronavirus testing. He, with his assistants, kept them engaged during the virtual offseason while installing schemes.

And, along the way, he made sure they stayed loose and had fun, often at the expense of Keenum, whom Stefanski refers to as “Chase,” for reasons Keenum doesn’t understand.

Like Keenum did in 2017 playing for Stefanski for the first time, Mayfield has thrived, as well. Dating back to a dinner they had together in Austin, Texas in February, Stefanski has developed trust with Mayfield, which has manifested itself on the field. And now, even in critical moments, Stefanski knows how to keep Mayfield relaxed, sometimes quipping to him, “feel free to throw a touchdown pass here,” after sending in a play.

“I think that goes back to him talking about having an open line of communication,” Mayfield said. “So, there are no questions and there are no uncertainties about what we are going to be about and the foundation that he laid.”

Because of that foundation, the Browns didn’t just weather the storm in Pittsburgh.

They thrived in it.

“He’s created a system and a culture and an identity,” Keenum said. “And the fact that he’s been able to do it in such a short period of time in such a crazy time as this is pretty remarkable.

“If that’s not coach of the year stuff, I don’t know what is.”

The ecommerce boss Walmart hired to take on Amazon is leaving