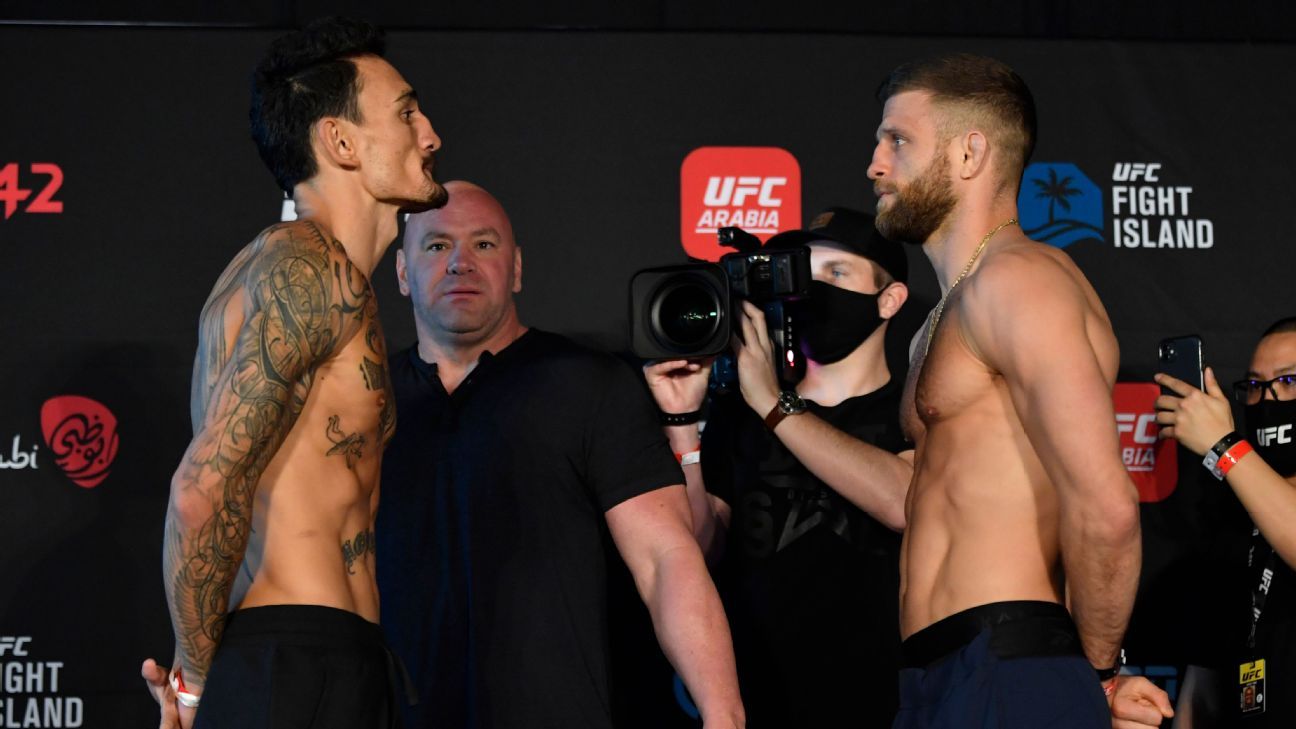 
One of the endearing — or perhaps maddening — facts about MMA is there is no set path to a UFC championship. Some paths are very traditional, basically following a straight line up the rankings. Others are unpredictable and at the mercy of a billion factors outside of a fighter’s control.

When things move in a relatively straight line, however, it’s pretty easy to see the chutes-and-ladders effect of every win and loss. For instance, take UFC featherweight Calvin Kattar.

Kattar (22-4) is set to face former champion Max Holloway (21-6) at UFC Fight Night on Saturday in Abu Dhabi, United Arab Emirates. It is the first UFC event to air on ABC, with an unusually early start time (main card at 3 p.m. ET on ABC and ESPN+, prelims at noon on ESPN+). And it’s a massive opportunity for Kattar, as a win over Holloway would solidify his spot near the very top of the division.

The UFC will open its 2021 schedule with a main event that should have title implications in the featherweight division. Former champion Max Holloway will take on the surging Calvin Kattar on Fight Island. Holloway fought just once in 2020, a razor-thin loss to champ Alexander Volkanovski. Kattar, meanwhile, went 2-0 last year and has won four of five fights overall.

It’s not completely unlike the opportunity Kattar had in late 2019, when he fought a surging Zabit Magomedsharipov in the main event of a UFC Fight Night in Moscow. Kattar lost that fight via unanimous decision, but the overwhelming feeling afterward was that he would have won had the fight been scheduled for five rounds, instead of being a rare three-round main event.

In a way, Kattar has basically spent every day since that loss trying to get back to the position he was in going into it: a matchup against a top-five opponent that could earn him a title shot if he wins. That could easily translate into a lot of pressure. A win puts Kattar in the thick of title contention. A loss could mean another year of work before getting this opportunity again.

That’s one way of looking at it, at least. Kattar says this last year of regaining his position in the division actually alleviates the pressure, because he knows he can do it. He took a disappointing setback against Magomedshapirov 14 months ago in stride, and went 2-0 in 2020, a year that was full of logistical challenges.

The stakes of this fight are fascinating, in that it feels as if the narrative going in is that Holloway has more to lose. He’s the higher-ranked of the two, and despite the fact he’s still considered one of the best in the world, his record in his last four fights is 1-3. But I would argue Kattar has just as much, if not more, to lose. He’s never reached the heights Holloway has, and this is such a distinct opportunity for him to change that. And there is no guarantee of when another opportunity like this will come along if he were to come up short.

It’s probably safe to speculate the style of this matchup played a big part in the UFC’s decision to place it on ABC, but what’s at stake for each fighter certainly adds a lot.

1,688: Days it will have been on fight night since Holloway last competed in a nontitle fight. There has been a belt on the line in all eight of his bouts since he defeated Ricardo Lamas on June 4, 2016.

4: Knockdowns in the UFC by Kattar, each of which has resulted in a finish.

2,173: Significant strikes landed in the UFC by Holloway, the most all time among fighters in any weight class.

5.01: Significant strikes landed per minute in the UFC by Kattar, the seventh-highest rate among active 145-pounders.

Make your picks and compete to win a FREE streaming of UFC 258! Make Your Picks

One definitely gets the feeling Kattar’s game plan is to put Holloway on his back foot and win this fight on the feet. And Holloway will likely accept that challenge. I don’t see this thing going to the floor. It’s Holloway’s output and offensive variety against Kattar’s pressure boxing and power. It’s two guys who tend to get stronger as a fight progresses. It’s bound to be back and forth, it’s bound to be competitive. Coin flip fight to me. If I have to give a pick, which I do, I’ll lean Holloway because of the championship experience (and this fight has a championship feel to it), but this is anything but a confident pick. Holloway by decision.

Watch the main card on ABC, available on cable/satellite as well as via streaming.

1. Matt Brown can make history in his co-main event against former interim UFC welterweight champion Carlos Condit. Brown has 11 knockouts in his UFC career, one shy of the record held by Vitor Belfort. A win by Brown would also give him 16 in his UFC career, tying him with Matt Hughes for third-most in division history.

2. Condit snapped a career-long five-fight losing streak when he defeated Court McGee in October. Condit now will look to win consecutive fights for the first time since 2012, when he won five straight, which led to his title shot vs. Georges St-Pierre.

3. Argentinian welterweight contender Santiago Ponzinibbio makes his return to the Octagon after an absence of over two years, facing Li Jingliang. Ponzinibbio is one of nine fighters with a current UFC win streak of seven or more fights.

4. Joaquin Buckley returns to the site of his highlight-reel wheel kick knockout when he faces Alessio Di Chirico. Buckley’s KO of Impa Kasanganay in October, just the fourth spinning wheel kick knockout in UFC history, was named the Helwani Nose Award Knockout of the Year.

5. The main card opener will see two undefeated fighters each looking to keep his “0” when 7-0 Punahele Soriano faces 10-0 Dusko Todorovic. Both men have shown they are finishers, combining for 15 in 17 career fights.

Ethiopia’s Oromia conflict: Why a teacher was killed ‘execution-style’