ColdSnap is a Keurig-like machine for soft serve ice cream 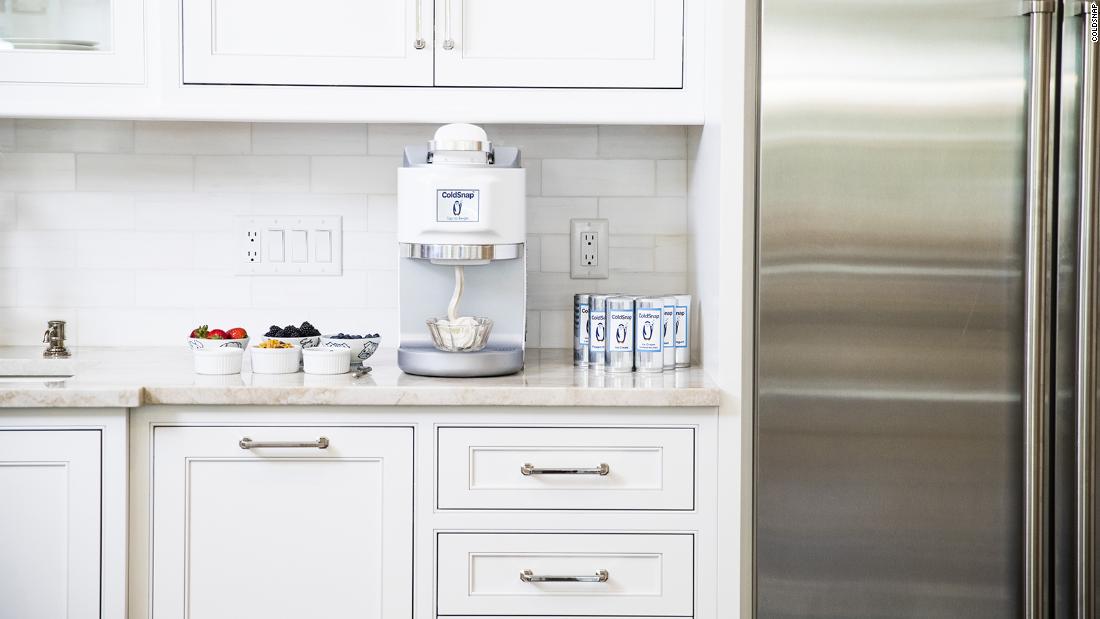 A new machine called ColdSnap, which looks and functions like a Keurig for soft serve ice cream, has emerged as one of the buzziest products of this year’s all-digital CES tech show. At a time when much of the event, like much of our lives, is focused on ways to adapt to the pandemic, the ColdSnap offers the promise of something sweeter, on demand.

The system is marketed as taking shelf-stable, recyclable ice cream pods of varying flavors and freezing them in about 90 seconds before dispensing it into a cup or cone. The company is also working on pods for smoothies, frozen coffees, protein shakes, non-dairy ice cream and frozen cocktails, such as mud slides and daiquiris. The machine reads a QR code on top of the pod’s label to find the specific freezing temperature for each product.

The product, which is only in the prototype stage with plans to launch in select locations in the second quarter of 2021 and ship direct to consumers early next year, falls under the where has this been all my life? category. But the price point is less sweet than the product: $1,000. (The company said it aims to eventually bring it down by half.)

Matthew Fonte, the serial entrepreneur behind the product, said it’s been a big undertaking to create pods that are safe, convenient (little cleanup), cost effective and sustainable; the pod containers are aluminum like a soda can. Keurig and other one-time use pod makers have long been criticized for the inability to recycle their products.

“This is challenging and requires significant development and engineering expertise,” said Fonte, who has a PhD in mechanical engineering from Tufts University. “In the beginning, a lot of people didn’t think it was [scientifically] possible to create ice cream like this in about a minute or so.”

The company says the machine simultaneously pulls heat from the pod, creating a cooling effect on the liquid ice cream mix, and engages a part within the pod that churns the ingredients during the cooling process. Air is sucked into the can to make the required loft in the ice cream.

The idea started years ago when Fonte and his two daughters grew tired of reading the same books at bedtime and decided to write in “invention journals.”

“We included new toys, toothbrushes and hoola hoops,” he told CNN Business. “One day, they asked for an ice cream machine.”

He explained ice cream machines for the home aren’t typically efficient; many require a bucket to be frozen overnight, a consistent mixing process and are a mess to clean up. “What about a Keurig machine for ice cream?” one daughter asked.

Fonte’s background played a significant role in jumpstarting the process. He and his brother worked alongside their father, an Italian immigrant, for 20 years in a metal working business, producing rocket motor cases for missiles. After they sold the business, they started another focused on super elastic orthopedic implants. His team from that company later left together to start ColdSnap.

“It’s been really fun with my daughters, who have seen the whole beginning of starting a company, purchasing a 2,500 sq. ft. building, getting patents, and they have shares in the company,” he said. “I’ve been explaining how the investors invest in us and how we can’t let them down.”

The company has since grown to an 18-person team. Despite the high price tag, Fonte said the company has “thousands” of sign-ups from people to buy the product. “Sometimes we get notes on our website that just say, ‘Hurry up. I need this.'”

Keurig-inspired ice cream machines aren’t entirely new. LG demoed a frozen yogurt pod system prototype called SnowWhite at the 2019 SXSW conference in Austin, and startup Wim Yogurt developed a $299 frozen yogurt machine but suspended operations in 2018. Meanwhile, traditional at-home ice cream machines can cost less than $100.
The cost of the ColdSnap system may conjure up memories of Juicero, the $400 web-connected Keurig-for-pressed-juice system backed by Google and others. It received $120 million in capital, but ultimately failed largely due to the price point, with many saying Silicon Valley was out of touch with the rest of the country. There were also reports customers could get the same result by squeezing the startup’s juice packs with their bare hands as with the machine.

ColdSnap, however, was originally intended for commercial spaces like break rooms in offices, car dealerships and student unions. When Covid hit earlier last year, the company refocused. Fonte said he aims to take the price down to $500 by switching stainless steel parts for plastic fixtures. The pods will cost $2.99 each when it launches.

Keurig-like spinoffs are plentiful, ranging from pod coffee and pod cocktails to pod cookies. ColdSnap claims its product is a much cleaner play, due to the recyclable aluminum pods, which resemble Red Bull cans, and the process of keeping ice cream cold inside of the trucks that then transport it.

Judging from the enthusiastic response, it appears people still want a product like this to become a reality. Fonte said US interest is high but he also sees opportunity in places such as India and China where the cold supply chain is spotty and could benefit from an on-demand system like ColdSnap.

“We hope that maybe someday, in 20 years, people will look back and say, ‘Remember when ice cream was frozen the whole time. How crazy is that?'”

Find a striker, build depth behind stars and determine future of veterans