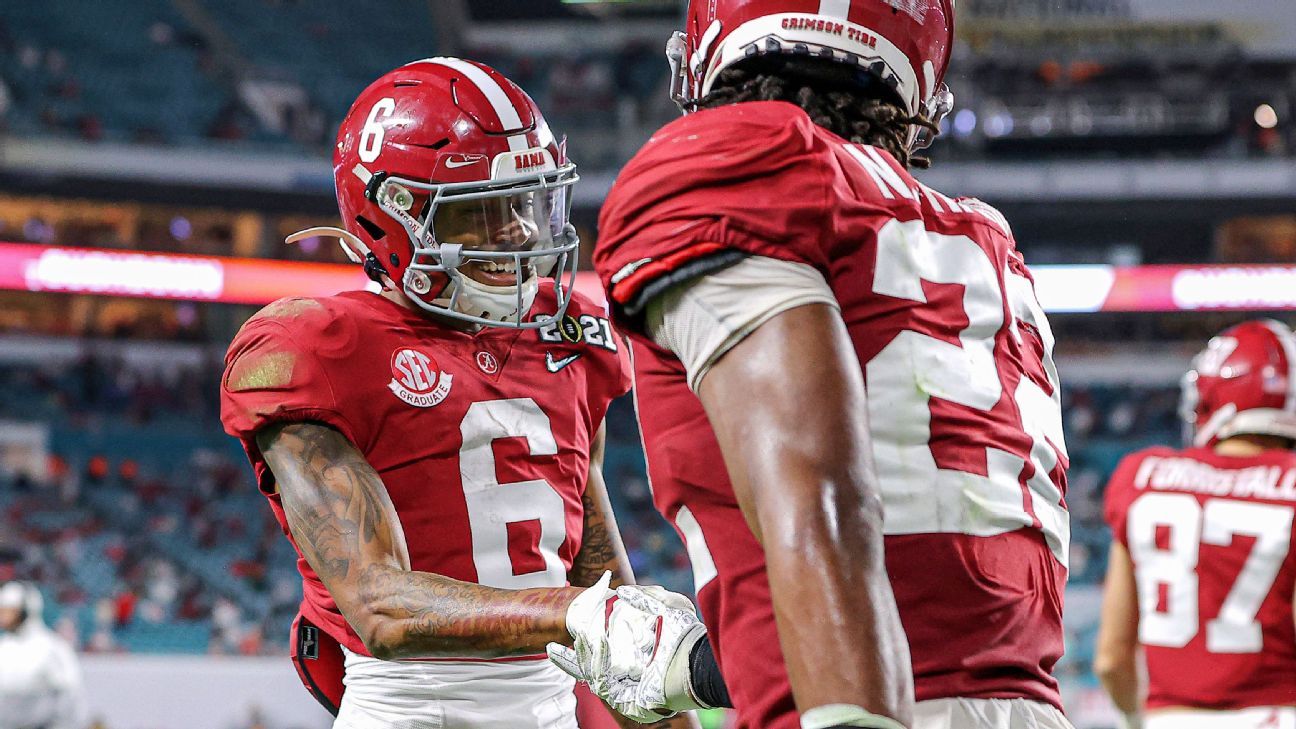 
Another college football bowl season is in the books. While Alabama reigns supreme again, there was much more to the postseason than just the College Football Playoff. Even in a modified bowl season, with fewer games because of the coronavirus pandemic, there were still plenty of exciting moments and noteworthy performances to cap off this unprecedented college football season.

Here’s a look at some of the top individual showings that make up our 2020 All-Bowl team:

The Heisman Trophy finalist completed 81.3% of his passes for 761 yards, nine touchdowns and zero interceptions in two College Football Playoff wins to lead the Crimson Tide to the national championship.

The sophomore ran for a bowl-record 317 yards and five touchdowns in a 56-28 win over North Texas in the Myrtle Beach Bowl.

The freshman accounted for 220 yards from scrimmage (183 rushing on just 10 carries; 23 receiving) and three total touchdowns in the Longhorns’ 55-23 blowout win over Colorado in the Valero Alamo Bowl.

Olave caught 14 passes for 201 yards and two touchdowns in the Buckeyes’ two playoff games. His best performance came in a six-catch, 132-yard, two-touchdown showing in the Allstate Sugar Bowl win over Clemson.

The freshman had a breakout performance in the Cowboys’ 37-34 Cheez-It Bowl win over Miami, catching six passes for a game-high 118 yards and three touchdowns, including a key fourth-quarter score.

The Heisman Trophy winner was unstoppable in the College Football Playoff, catching 19 passes for 345 yards and six touchdowns en route to offensive MVP honors in both the Rose Bowl and the national title game.

The freshman caught five passes for 96 yards and two touchdowns in BYU’s dominant win over UCF in the RoofClaim.com Boca Raton Bowl.

Ealy had a strong performance in the Goodyear Cotton Bowl Classic, allowing no quarterback sacks or pressures in 31 pass-blocking snaps. The Sooners’ line paved the way for 288 rushing yards before contact, third-most in a game all season.

Gerak excelled in the interior through 83 offensive snaps in the Wildcats’ win over Auburn in the Outback Bowl. The Wildcats finished with 457 yards, including 166 rushing.

The center led a unit that fueled a 500-yard rushing performance in the Mountaineers’ Myrtle Beach Bowl win, which included five rushing touchdowns.

Young had six knockdown blocks, allowed no sacks or quarterback pressures and graded at 92% in Kentucky’s win over NC State in the TaxSlayer Gator Bowl.

Nichols had two sacks in the Wolf Pack’s 38-27 win over Tulane in the Famous Idaho Potato Bowl.

Chandler-Semedo, who was named the Liberty Bowl’s defensive MVP, had 13 tackles (10 solo), a tackle for loss, a forced fumble and a last-minute interception that sealed the Mountaineers’ win over Army.

The senior had a game-high 10 tackles (eight solo), a sack and 2.5 tackles for loss in the Aggies’ win over North Carolina in the Capital One Orange Bowl.

The PlayStation Fiesta Bowl defensive MVP had four tackles, a tackle for loss and two fumble recoveries in the Cyclones’ win over Oregon.

Forbes returned an interception 90 yards for a touchdown in the Bulldogs’ 28-26 win over Tulsa in the Lockheed Martin Armed Forces Bowl.

Norwood returned an interception 45 yards for a touchdown en route to defensive MVP honors in Oklahoma’s rout of Florida in the Cotton Bowl.

Podlesny was 3-for-3 on field goal attempts, including a 53-yard game winner in the final seconds to lift Georgia to a narrow win over Cincinnati in the Peach Bowl.

Duffy had three punts inside the 20 and one inside the 10 and deftly avoided a block. On his five punts in the Gator Bowl, NC State’s average starting field position was its own 16-yard line, and only one punt was returned for 1 yard.

After Houston narrowed Hawaii’s 21-point lead to just seven, Turner returned a kickoff 92 yards for a touchdown to keep the Cougars out of reach in a 28-14 Hawaii win in the New Mexico Bowl. Turner also caught a 75-yard touchdown pass and rushed for 60 yards, finishing with 252 all-purpose yards.

How people of color can cope with Capitol riot hypocrisy