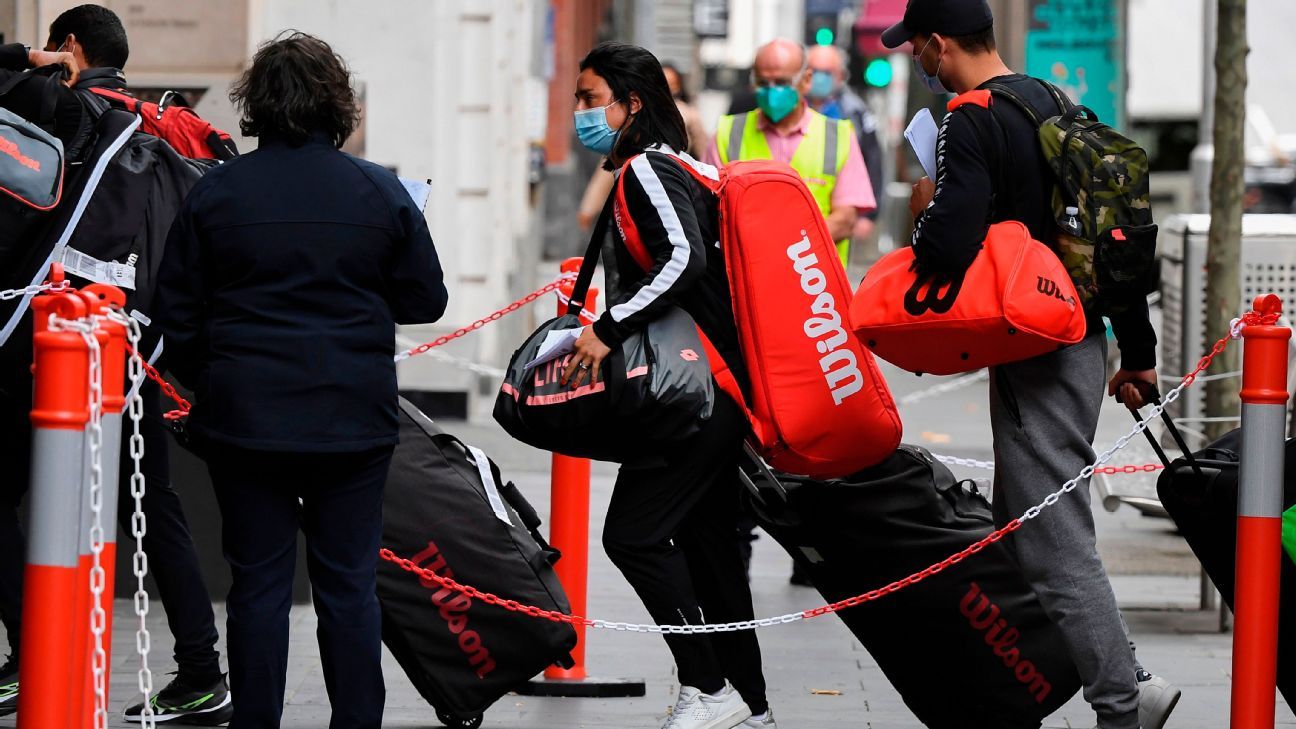 
Three coronavirus cases have been detected among charter flights carrying tennis players, coaches and officials to Melbourne ahead of the Australian Open, health authorities and tournament organizers said Saturday.

A total of 47 players from the two affected flights — arriving from Los Angeles and Abu Dhabi — are now in a strictly enforced 14-day quarantine without the ability to leave their hotel rooms — even to practice. The Australian Open is scheduled to start Feb. 8.

Health authorities said two positive COVID-19 cases emerged from a charter flight from Los Angeles, and Tennis Australia said later Saturday that there was a third positive case on a flight from Abu Dhabi.

The cases from Los Angeles involved an aircrew member and a passenger who was not a player. The third positive test — also not a player — was from a flight from Abu Dhabi in the past 24 hours, Tennis Australia said.

Authorities earlier said that all passengers from the Los Angeles flight would go into the 14-day hotel quarantine.

“An aircrew member and Australian Open participant who is not a player have been transferred to a health hotel following positive test results for coronavirus (COVID-19),” Victoria state’s health department said in a statement about the Los Angeles flight.

“All remaining 66 passengers on the flight have been determined to be close contacts. Any players and support people will not be able to leave quarantine to attend training. The remaining flight crew all tested negative and were permitted to fly out without passengers directly to their home port.”

Australian Open tournament director Craig Tiley issued a statement saying the 24 players who were on that flight will not be able to leave their hotel rooms for 14 days and until they are medically cleared.

“We are communicating with everyone on this flight, and particularly the playing group whose conditions have now changed, to ensure their needs are being catered to as much as possible and that they are fully appraised of the situation,” Tiley said.

Later Saturday, Tennis Australia said 23 players were among the 64 people on the flight from Abu Dhabi.

“All passengers from the flight are already in quarantine hotels, and the positive case, who is not a player and had tested negative before the flight, has been transferred to a health hotel,” Tennis Australia said.

“The 23 players on the flight will not be able to leave their hotel room for 14 days and until they are medically cleared. They will not be eligible to practice.”

Kei Nishikori, the 2014 US Open runner-up who tested negative for COVID-19 after having two positive tests, and two-time Australian Open champion Victoria Azarenka were reported by local media to be among a group of players who arrived on the flight from Los Angeles.

“The Chief Health Officer has reviewed the flight and has determined that everyone on board needs to isolate and will be confined to their rooms for the 14-day quarantine period,” said the notification Watson posted.

“We are aware of the major impact this has on your preparation for the Australian summer,” it continued, pledging “to do everything we can to mitigate this impact.”

Being unable to leave their room would mean the only workouts they’d be able to have would be on an exercise bike left in the rooms of all of the players.

Other players will be allowed to train under strict conditions and with supervision for up to five hours a day.

Players and officials were supposed to have received a negative COVID-19 test before they boarded their flights. The people who tested positive on arrival have not been publicly identified.

Azarenka, who won the tournament in 2012 and 2013, tweeted Friday: “Made it to Melbourne! Thank you everyone so much for making it happen. I can only imagine how many hours of work and compromise it took for us to be here! Thank you.”

She included what appeared to be a selfie next to a window with downtown city views. Azarenka has not tweeted again since.

The 15 charter flights and the early arrivals are all part of Tennis Australia’s attempt to hold the tournament despite a general ban on international arrivals into the country.

Australia has done a good job of containing the coronavirus, with 909 deaths nationally. Victoria state, which has Melbourne as its capital, accounted for 810 of those during a deadly second wave three months ago that resulted in overnight curfews and lockdowns for the city.

Five-time finalist Andy Murray’s status for the tournament was put in doubt after he tested positive for COVID-19 only days before his planned flight to Melbourne.

The charter flights to Australia were restricted to 25% capacity and arrived over a 36-hour period ending early Saturday.

Novak Djokovic, Rafael Nadal and Serena Williams are among a group of players involved in an exhibition event in Adelaide, in South Australia, on Jan. 29. Those players flew straight to Adelaide to begin their hotel quarantine period.

South Australia health officials “confirmed that there is no one who has an active COVID-19 infection in the entire tennis cohort based in Adelaide,” the Australian Open said Saturday on Twitter. “Testing will continue on a daily basis.”

Biden inauguration: All 50 US states on alert for armed protests