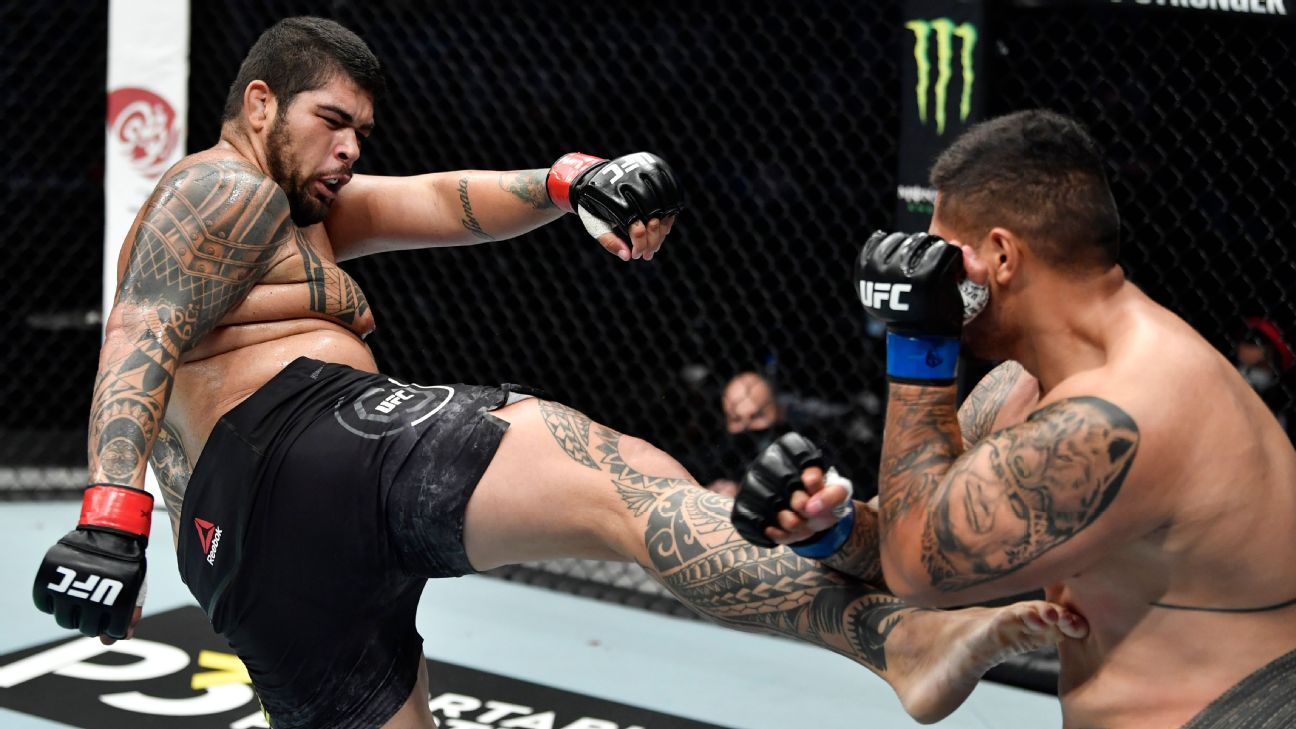 
The former featherweight king is looking for a path back to the crown. Max Holloway will face Calvin Kattar in a pivotal featherweight bout in the main event of UFC Fight Night on Saturday in Abu Dhabi, United Arab Emirates. It is the first UFC show of the year, and the main card will air on ABC, the home for boxing over several decades.

The winner of this fight could be next in line for a title opportunity. ESPN has Holloway ranked No. 2 and Kattar at No. 6 in the featherweight division.

All fights from UFC Fight Night: Holloway vs. Kattar will be available to watch on ESPN+.

Holloway (21-6) has dropped two in a row to current champion Alexander Volkanovski. Both bouts were very close and many thought Holloway won the second at UFC 251 in July. Holloway, 29, is the most decorated featherweight in UFC history. He held a 145-pound title in the UFC from 2016 to 2019. The Hawai’i native has the most wins (16), the most KO/TKO wins (8) and the most stoppage victories (10) in UFC featherweight history.

Kattar (22-4) has won two in a row and four of his past five. The Massachusetts native has four finishes in six UFC wins. Kattar, 32, is coming off a unanimous-decision win over Dan Ige last July.

In the co-main event, two of the most exciting fighters in UFC welterweight history — Carlos Condit and Matt Brown — square off. Condit (31-13), a former UFC interim welterweight champion, snapped a five-fight losing streak in his most recent bout, a win over Court McGee. Brown (22-17) had a two-fight winning streak snapped in his latest bout against Miguel Baeza.

Also on the card, welterweight contender Santiago Ponzinibbio returns after more than two years away because of illness to face Li Jingliang, and knockout artist Joaquin Buckley meets Alessio Di Chirico in a welterweight bout.

With 20 seconds left, Felipe and Tafa stood in the center of the Octagon throwing hard punching combinations at each other. The 2,000 paid fans in attendance — the first to witness a UFC event since last March — loudly cheered.

Felipe ended up winning a split decision (29-28, 28-29, 29-28) over Tafa in a very close fight. But what people will remember about this battle of big heavyweights won’t be who won and who lost. It’ll be how they brought the first UFC crowd in 10 months to its feet with an incredibly entertaining brawl.

With shades of Max Holloway’s moment at UFC 199, @CarlosBoiMMA pointed to the middle and @Justin_Tafa agreed to throw down 😤 #UFCFightIsland7 pic.twitter.com/frNZyP9KZH

Tafa controlled the first round. He landed hard kicks to Felipe’s body and legs. At one point, he nearly took Felipe off his feet with a right leg kick. You could see red toe marks on Felipe’s thigh from Tafa’s brutal kicks. In the second, though, Felipe took momentum. He rocked Tafa with a big combination culminating with a big right hand. Tafa retreated against the cage and Felipe hurt him again with hooks to the body as Tafa winced. The two finished the round with a big exchange in the center as the crowd cheered.

In the third, both men had their moments. Tafa landed some hard body shots in close. It was as if the two giant men were fighting in a phone booth. Later, Felipe landed a big elbow that momentarily stunned Tafa. The bout ended with the two going at each other, risking the loss of consciousness to set the crowd afire.

Felipe, 26, has now won two straight following a loss in his UFC debut. The Brazil native also has pro boxing experience. Tafa, a 27-year-old Australia native, has now dropped two of three in the UFC.

Emeev had to dig deep in Round 3. Actually, both men did.

After being taken down and finding himself in full mount position, Emeev managed to escape from danger, reversing position to get on top. And even after he lost that position, the 33-year-old Russian went back to work with aggression and pressure, earning the decision on the scorecards of two of the three judges for his ninth victory in his past 10 fights.

All three scoring at cageside had the bout 29-28.

Zawada had something to overcome in Round 3, as well, and he almost did. He had been taken down multiple times in the first two rounds, and a right hand from Emeev right at the horn ending the second round — or a split second after the horn — opened a cut next to the left eye of the 30-year-old German. He fought most of Round 3 with blood dripping into his eye, yet he nearly got the job done by gaining dominant position.

Instead, it was the third loss in his past four fights for Zawada, who had not competed since 2019.

For three rounds, Melo stalked forward, throwing power punches. She ate some jabs in the process, and not every big hook landed, but enough did for her to earn the win.

The most significant strike came in the second round. Melo whipped a combination that culminated in a shovel left hook, cracking Moras in the nose. Moras’ mouthpiece fell out after the punch landed and her nose ended up bloodied. Moras had some success with her jab and leg kicks. But there was little doubt that Melo was landing the harder punches throughout the fight.

Melo, 32, had a three-fight losing streak snapped. The Brazilian picked up her first UFC win. Moras, a 32-year-old Canada native, has now dropped two straight and five of her past six.

“I feel really happy and honored to get my first UFC win,” Melo said. “I can’t even explain how happy I am. I just want to keep evolving, train harder and keep growing.

Lingo had not fought since his first defeat last February. But he did not take long to get back on track, dropping Kilburn within the first 30 seconds. But his work was not yet done.

After Kilburn climbed right back to his feet, Lingo proceeded to pepper him with sharp jabs, left hooks and more right hands on his way to securing the nod on all three scorecards.

It’s Buffer vs. Fly at #UFCFightIsland7 😂

Kilburn, in his first fight since 2019, did not make it easy, despite the lopsided scorecards. The 25-year-old from Clarksville, Tennessee, tried takedown after takedown, and as the fight wore on, he did appear to be the fresher competitor. But he couldn’t get out of the way of Lingo’s punches, and suffered his second straight loss.

Lingo, 26 and fighting out of Dallas, had not competed since last February’s unanimous decision loss to Youssef Zalal.

Watch this fight no ESPN+.