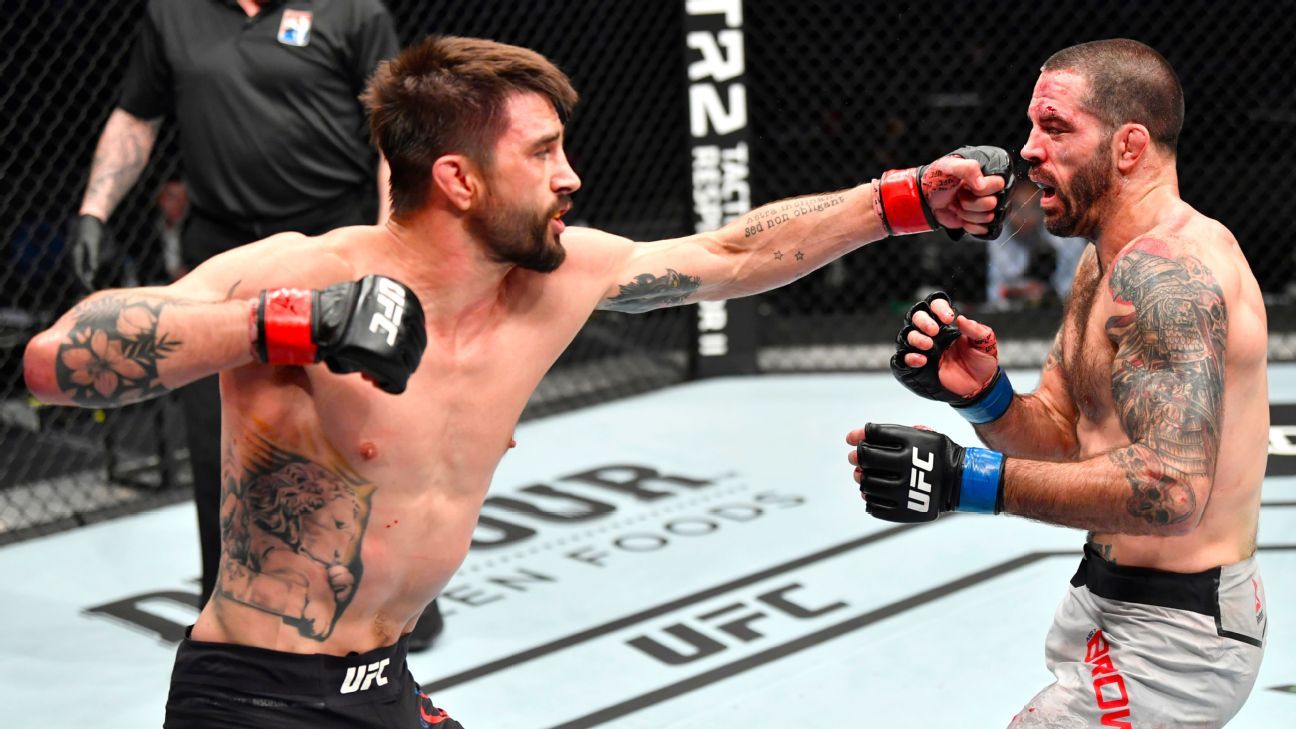 
This fight was supposed to happen just over seven years ago amid great anticipation.

In late 2012, Carlos Condit was on a five-fight winning streak before losing back-to-back fights to champion Georges St-Pierre and future champ Johny Hendricks. Matt Brown, meanwhile, was in the midst of what would end up as a seven-fight winning streak.

Both of these guys were at the top of the sport, but their scheduled December 2013 collision was canceled after Brown suffered a back injury in training. The matchup was revisited two years ago, but a Brown injury again scuttled the plans.

All fights from UFC Fight Night: Holloway vs. Kattar will be available to watch on ESPN+.

Finally, they met on Saturday in the co-main event of UFC Fight Night right before the Max Holloway-Calvin Kattar headline fight in Abu Dhabi, United Arab Emirates. The two veterans delivered an entertaining three rounds, with Condit walking away with a long-awaited victory by unanimous decision (30-27, 30-27, 30-27).

Brown got the better of the two early on, although he suffered a cut on his head while taking Condit to the canvas, where much of the first round played out. But from then on, Condit was better at defending takedowns, stuffing five attempts in the last two rounds. Brown appeared to lose steam, and he was the one who spent much time on his back during the fight’s final 10 minutes.

Condit, a 36-year-old from Albuquerque, New Mexico, competing in his 45th pro fight, was pleased with the result, especially after coming in having lost eight of his previous 11 fights.

Condit and brown some beast 👊🏼💯

Brown, who is 40 and from Columbus, Ohio, was in his 40th fight. The defeat gives him seven losses in his past 10 fights.

Ponzinibbio had not fought in more than two years. And Li did not give him a very gracious welcome back.

Near the end of the first round, Li ripped off a vicious combination, catching Ponzinibbio with a vicious left hook that put him down. Referee Jason Herzog dove in before Li could inflict any more damage. The welterweight bout was ruled a knockout at 4:25 of the first.

Man you gotta feel bad for Ponzinibio after 2 years off struggling, finally coming back and boom 💥 life is hard sometimes 🙏🏾 #UFCFightIsland7

The bout was fairly even until Li’s explosion. Ponzinibbio did look tentative at times. He had not fought since November 2018 due to several variants of a blood infection. But Li, his movement and timing deserves the credit for the finish.

Li, 32, has now won four of five and eight of his last 10 fights. The China native has finished his last three wins. Ponzinibbio, a 34-year-old Argentina native, had won seven straight coming in and was on the verge of a big contender bout prior to his health issues.

Sometimes the highlight reel spins your highlight. Sometimes it features the other guy’s.

Buckley, who had last year’s knockout of the year with a wildly creative spinning kick, was the victim of a head kick this time, taking a heavy one to the noggin that quickly ended the fight, giving Di Chirico his first victory since 2018.

Di Chirico connected with a right foot to the head that buckled Buckley at 2:12 of Round 1 and put a halt to the 31-year-old Italian’s three-fight losing streak.

Buckley, who is 26 and from St. Louis, was loading up with his aggressive striking from the start, but Di Chirico maintained his poise and kept his distance, making Buckley miss. Then, with the fighters at the center of the Octagon, Di Chirico unloaded with the head kick that dropped Buckley, with no follow-up shots needed.

For Buckley, the loss ended a two-fight winning streak.

Soriano finished the UFC’s first-ever fight on ABC — the longtime home of boxing — with a finish right out of boxing.

Soriano dropped Todorovic three times in the first round with the latter one finishing things at 4:48 via TKO in a middleweight bout. All of the knockdown punches came with Soriano’s powerful left hand. Both men came into the bout undefeated.

Todorovic did a good job playing the matador in the opening minutes, just evading Soriano’s ferocious blitzes. But that didn’t last long. Soriano sent Todorovic reeling with a left hand against the cage. Todorovic was able to recover, get up and pull Soriano into his guard. But Soriano wasn’t having it. He got up and then landed another booming left with Todorovic’s head against the cage.

On impact, Todorovic’s mouthpiece flew out of his mouth and landed in between the cage and canvas. Referee Herb Dean had some difficulty trying to fish it out of the area. During that time, Todorovic had time to recover from the two knockdowns. But it didn’t matter at all. As soon as Todorovic got his mouthpiece back and the fight restarted, Soriano was right back as the aggressor, landing another left hand with Todorovic backing up. Todorovic fell and even though he was still attempting to fight, Dean had seen enough — the fight was called with Soriano winning via TKO.

Soriano, 28, has finished both of his UFC fights via TKO. The Hawaii native has seven finishes in eight career victories. Todorovic, a 26-year-old Serbia native, won his UFC debut back in October, a TKO win victory over Dequan Townsend.

It took Edwards about a minute into her UFC debut to show that she was ready for the short-notice opportunity. Taken down by Wu, the 25-year-old from Panama immediately set up an armbar attempt. When that did not earn her the submission and Edwards ended up on her back, she reversed position and took a dominant position on her opponent’s back.

Wu, 24 and from China, kept coming forward the whole way, her awkward footwork at times keeping Edwards out of range. But Edwards was dangerous no matter where the fight was being fought. At one point, she lost balance while missing a strike attempt and fell to the canvas, and when Wu went at her to attack, the Chinese fighter was greeted by a two-footed up-kick, to the face.

For Wu, who had not competed in over 16 months because of fight cancellations, it was her second straight loss.

Watch this on ESPN+.

With 20 seconds left, Felipe and Tafa stood in the center of the Octagon throwing hard punching combinations at each other. The 2,000 paid fans in attendance — the first to witness a UFC event since last March — loudly cheered.

Felipe ended up winning a split decision (29-28, 28-29, 29-28) over Tafa in a very close fight. But what people will remember about this battle of big heavyweights won’t be who won and who lost. It’ll be how they brought the first UFC crowd in 10 months to its feet with an incredibly entertaining brawl.

With shades of Max Holloway’s moment at UFC 199, @CarlosBoiMMA pointed to the middle and @Justin_Tafa agreed to throw down 😤 #UFCFightIsland7 pic.twitter.com/frNZyP9KZH

Tafa controlled the first round. He landed hard kicks to Felipe’s body and legs. At one point, he nearly took Felipe off his feet with a right leg kick. You could see red toe marks on Felipe’s thigh from Tafa’s brutal kicks. In the second, though, Felipe took momentum. He rocked Tafa with a big combination culminating with a big right hand. Tafa retreated against the cage and Felipe hurt him again with hooks to the body as Tafa winced. The two finished the round with a big exchange in the center as the crowd cheered.

In the third, both men had their moments. Tafa landed some hard body shots in close. It was as if the two giant men were fighting in a phone booth. Later, Felipe landed a big elbow that momentarily stunned Tafa. The bout ended with the two going at each other, risking the loss of consciousness to set the crowd afire.

Felipe, 26, has now won two straight following a loss in his UFC debut. The Brazil native also has pro boxing experience. Tafa, a 27-year-old Australia native, has now dropped two of three in the UFC.

Emeev had to dig deep in Round 3. Actually, both men did.

After being taken down and finding himself in full mount position, Emeev managed to escape from danger, reversing position to get on top. And even after he lost that position, the 33-year-old Russian went back to work with aggression and pressure, earning the decision on the scorecards of two of the three judges for his ninth victory in his past 10 fights.

All three scoring at cageside had the bout 29-28.

Zawada had something to overcome in Round 3, as well, and he almost did. He had been taken down multiple times in the first two rounds, and a right hand from Emeev right at the horn ending the second round — or a split second after the horn — opened a cut next to the left eye of the 30-year-old German. He fought most of Round 3 with blood dripping into his eye, yet he nearly got the job done by gaining dominant position.

Instead, it was the third loss in his past four fights for Zawada, who had not competed since 2019.

“I was confident I won all three rounds, but when one of the judges scored it for him, I was kind of shocked,” Emeev said. “I believe it should have been an unanimous decision, but at the end of the day I got the win so it’s all that matters.

“At first I wanted to take it easy, move around, but Zawada set a high pace right away, started damaging my leg with low kicks, so I accepted his pace and fought back. I feel great. I felt the fans’ support, I could see they were cheering for me, it was good for me.”

For three rounds, Melo stalked forward, throwing power punches. She ate some jabs in the process, and not every big hook landed, but enough did for her to earn the win.

The most significant strike came in the second round. Melo whipped a combination that culminated in a shovel left hook, cracking Moras in the nose. Moras’ mouthpiece fell out after the punch landed and her nose ended up bloodied. Moras had some success with her jab and leg kicks. But there was little doubt that Melo was landing the harder punches throughout the fight.

Melo, 32, had a three-fight losing streak snapped. The Brazilian picked up her first UFC win. Moras, a 32-year-old Canada native, has now dropped two straight and five of her past six.

“I feel really happy and honored to get my first UFC win,” Melo said. “I can’t even explain how happy I am. I just want to keep evolving, train harder and keep growing.

Lingo had not fought since his first defeat last February. But he did not take long to get back on track, dropping Kilburn within the first 30 seconds. But his work was not yet done.

After Kilburn climbed right back to his feet, Lingo proceeded to pepper him with sharp jabs, left hooks and more right hands on his way to securing the nod on all three scorecards.

It’s Buffer vs. Fly at #UFCFightIsland7 😂

Kilburn, in his first fight since 2019, did not make it easy, despite the lopsided scorecards. The 25-year-old from Clarksville, Tennessee, tried takedown after takedown, and as the fight wore on, he did appear to be the fresher competitor. But he couldn’t get out of the way of Lingo’s punches, and suffered his second straight loss.

Lingo, 26 and fighting out of Dallas, had not competed since last February’s unanimous decision loss to Youssef Zalal.