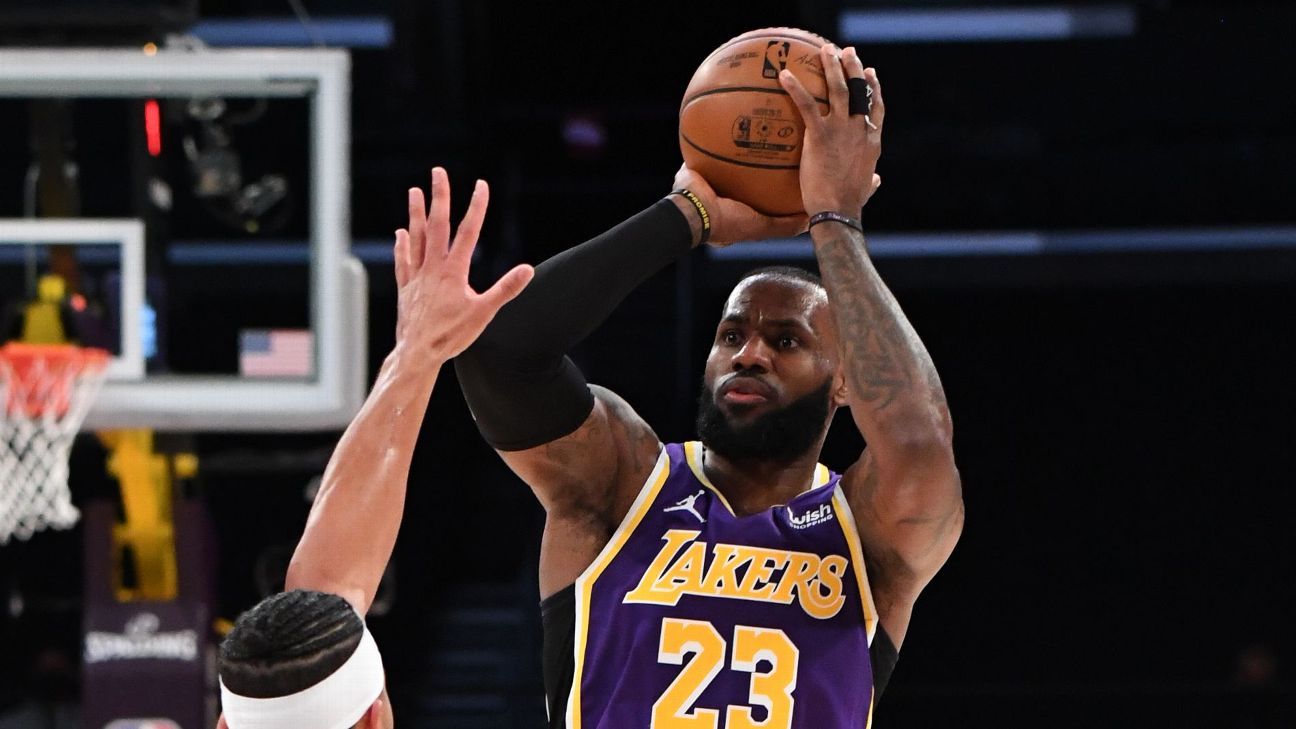 
The Los Angeles Lakers went into Friday with the third-best 3-point percentage in the NBA and were hot from the outside once again in their 112-95 win over the New Orleans Pelicans, hitting 15 3s at Staples Center.

LeBron James was responsible for two of them, going 2-for-6 from deep, which caused his season percentage to dip ever so slightly to 38.2% — which would be the second-best 3-point shooting season of his 18-year career should he keep it up.

Earlier in the week, Lakers coach Frank Vogel said James was “probably the best shooter on our team,” which begs the question: Does James agree with his coach?

“Obviously, if someone says, ‘Bet,’ then obviously you guys know, I’m going to take myself. That’s just the competitive nature in me and the work ethic that I put into my shot. But I feel real good with my shot right now, both from the free throw line and also from the 3-point line, and I want to continue that.”

Davis, who lifted his 3-point marksmanship from 33% in his first season in L.A. to 39.4% going into the Pelicans game, slotted James a bit lower.

“I would have to say Kenny is always our guy who we always look to for shots,” Davis said, referring to Caldwell-Pope. “Wes is still struggling to find his consistent 3. He’s been getting open looks, but I still put Wes up there. I put Bron third, just because of this year he’s been able to shoot the ball extremely well. Marc [Gasol] can shoot it. Marc is up there. And then I put myself. Dudz [Jared Dudley]. AC [Alex Caruso].”

For those scoring at home, that is nine different 3-point shooters rattled off by the Lakers’ co-captains — and doesn’t even include guys such as Quinn Cook and Markieff Morris, who live beyond the arc when they’re on the court.

Caldwell-Pope, who shot 4-for-6 from 3 on Friday and moved past Metta World Peace for ninth place on the Lakers’ all-time franchise list for 3-pointers made, was not ready to crown James as the team’s 3-point shooting king so long as he is involved.

“Numbers don’t lie,” he said, alluding to the career-best 55.3% he’s shooting from 3 so far this season. “But I’m really enjoying LeBron shooting the ball. He’s shooting it at a tremendous clip. He’s knocking them down and it’s fun seeing him have [success] shooting the ball as well. But we all know, I’m the real shooter, for sure.”

He might have a legitimate claim there, but, as Davis pointed out, everyone also knows that James gets certain privileges that Caldwell-Pope will never see.

“You know LeBron’s always going to be up there because he shoots a ton of them, especially when he gets hot, and starts shooting halfcourt and things like that,” Davis said. “I don’t think Coach will allow Kenny to do that.”

Dustin Higgs: Final execution of Trump presidency is carried out