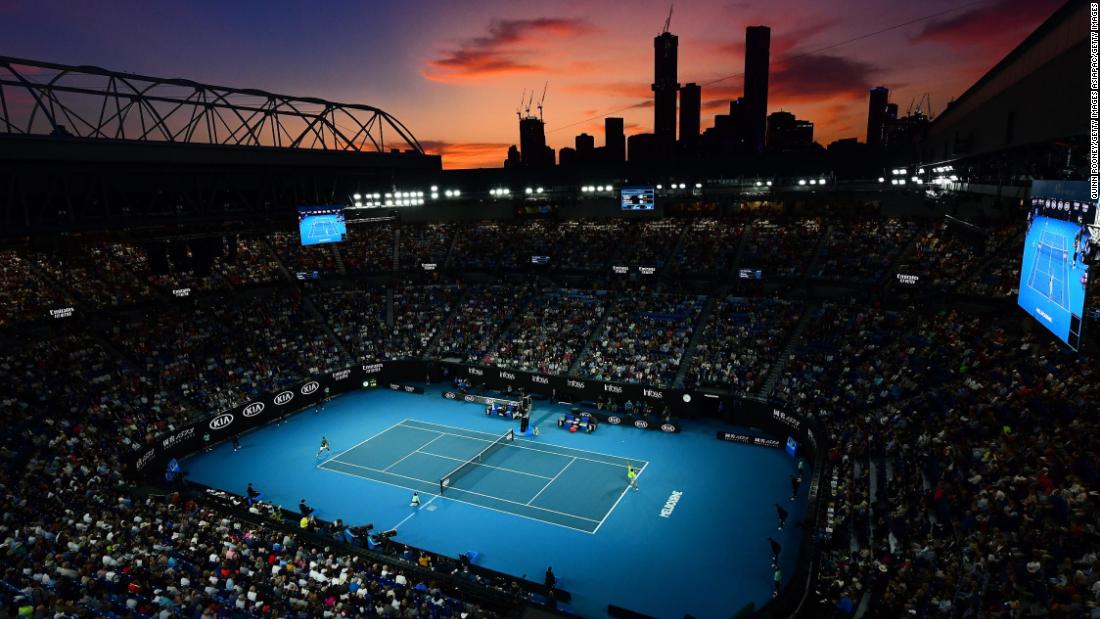 Twenty-four players on a charter flight from the US to Melbourne are required to quarantine for two weeks after a member of the flight crew and a passenger — not a player — tested positive. Both had tested negative within 72 hours of boarding the flight, which carried a total of 79 people.

Another 23 players are also in quarantine following the arrival in Melbourne of a charter flight carrying 64 people from Abu Dhabi. One person — again not a player — tested positive after the flight, despite presenting documentation of a negative Covid-19 test prior to takeoff.

All 47 players affected will not be able to leave their hotel rooms for the 14-day period and until they are medically cleared. They will not be eligible to practice.

Australian Open organizers released two statements on Saturday detailing how the players would be affected.

“All passengers from the flight are already in quarantine hotels and the positive case, who is not a player and had tested negative before the flight, has been transferred to a health hotel,” said the second statement in reference to the Abu Dhabi-Melbourne flight.

The passengers who tested positive for the virus on the US flight were also transferred to a health hotel.

“Our thoughts are with the two people who tested positive on the flight and we wish them well for their recovery,” said Australian Open Tournament Director Craig Tiley in the organizers’ first statement.

In a tweet that was subsequently deleted, French player Alize Cornet, who is in Melbourne but was not on either plane, described the situation as “insane.”

“Soon, half of the players from the AO will actually have to isolate,” she tweeted. “Weeks and weeks of practice and hard work going to waste for one person positive to Covid in a 3/4 empty plane. Sorry but this is insane.”

World No. 71 Sorana Cirstea said she understood the need to quarantine, but that being unable to train and practice would affect her ability to compete effectively at the Australian Open.

“People complaining we are entitled,” tweeted Cirstea. “I have no issues to stay 14 days in the room watching netflix. Believe me this is a dream come true, holiday even.

“What we cant do is COMPETE after we have stayed 14 days on a couch. This is the issue, not the quarantine rule.

“I would need at least 3 weeks after in order to be in decent form again and compete at a high level! said Cirstea in another tweet.

Meanwhile Yulia Putintseva posted a video on Twitter of a mouse in her hotel room.
“Been trying to change the room for 2 hours already! And no one came to help due to quarantine situation!” tweeted Putintseva.
“What i don’t understand is that, why no one ever told us, if one person on board is positive the whole plane need to be isolated,” said world No. 28 Putintseva in another tweet. “I would think twice before coming here.”

Originally scheduled to start this month, the Australian Open was rescheduled to February 8-21 because of Covid-19 concerns.

While most of the world’s top players have gone straight to Melbourne, others such as Novak Djokovic, Rafael Nadal and Serena Williams, flew to Adelaide.

“SA Health has confirmed that there is no one who has an active COVID-19 infection in the entire tennis cohort based in Adelaide,” tweeted the Australian Open later on Saturday. “Testing will continue on a daily basis.”

Prior to Saturday’s developments, tournament organizers had said players would also “undergo a more rigorous testing schedule than most returning travelers.”

All must undergo a 14-day quarantine, but are allowed out for five hours daily to train in strict bio-secure bubbles ahead of a host of warm-up tournaments, all in Melbourne, in the week leading up the grand slam.

But those 47 players now holed up in their hotels will be left wondering just how they will be able to properly prepare or the first grand slam of the season.