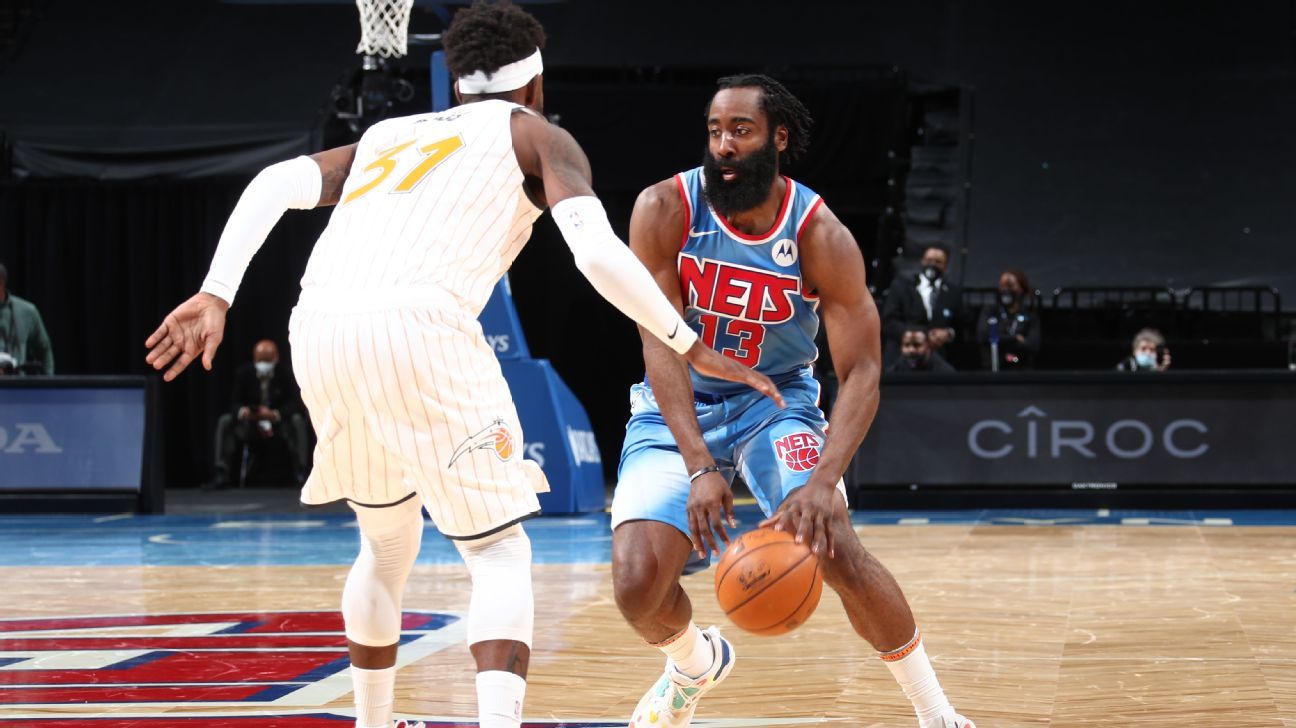 
NEW YORK — James Harden made history in his first game with the Brooklyn Nets on Saturday night, becoming the first NBA player to record a 30-point triple-double in his debut with a team.

Harden, who has made it known that Brooklyn was a preferred trade destination for months, said that it was “unbelievable” to finally be playing in a game with the Nets.

“I hope that you can tell by my smile and my play,” Harden said. “Just excited, excited for the opportunity. This is an unbelievable organization from top to bottom. For me, all I have to do is go out there and be the best James Harden I can be and good things will happen.”

Harden’s 14 assists were a franchise record for assists in a player’s first game with the team. He also had four steals, one block and nine turnovers in just under 40 minutes.

“I’m a hooper,” Harden said. “Like I said, I’m very unselfish. I’m going to do whatever it takes to win. Obviously, KD is like an elite, different kind of basketball player as far as the way he is able to score the basketball. It’s so easy for him, and I know that. I just want to make it a little bit easier if I can. For the rest of our team, our shooters and our bigs — make it easier for them. So yeah, it was easy out there.”

Harden, who was traded from Houston to Brooklyn as a part of a four-team deal earlier this week, started alongside Durant, Jeff Green, Joe Harris and DeAndre Jordan. It was his first on-court action with the team.

On Friday, Harden was ineligible to practice with the Nets because all of the players involved in the trade had not passed their physical exams.

“It was incredible,” Durant said of Harden’s debut. “You can see him trying to figure the best way to play early on. I felt we all were overpassing, trying to make everybody comfortable. He just got into his mode — being aggressive to score opened up the game for all of us.”

Coach Steve Nash called Harden a “world-class basketball player” after the game and said he expects him to get only better as the season goes along.

“I think he’s had a strange start to the season,” Nash said. “… He’s not at his best condition yet. For him to do as many things as he did on the basketball floor tonight was incredible.”

Nash said he looks forward to working Irving in when he’s available to play again, calling it a “good problem to have, trying to figure out where they can coexist.”

Harden said he is looking forward to playing alongside Irving.

“I’m so excited for Ky to get back,” Harden said. “He’s a key piece to what we are trying to do. The chemistry, we can build that. The sooner we can be on the court together, it’s going to be scary hours.”