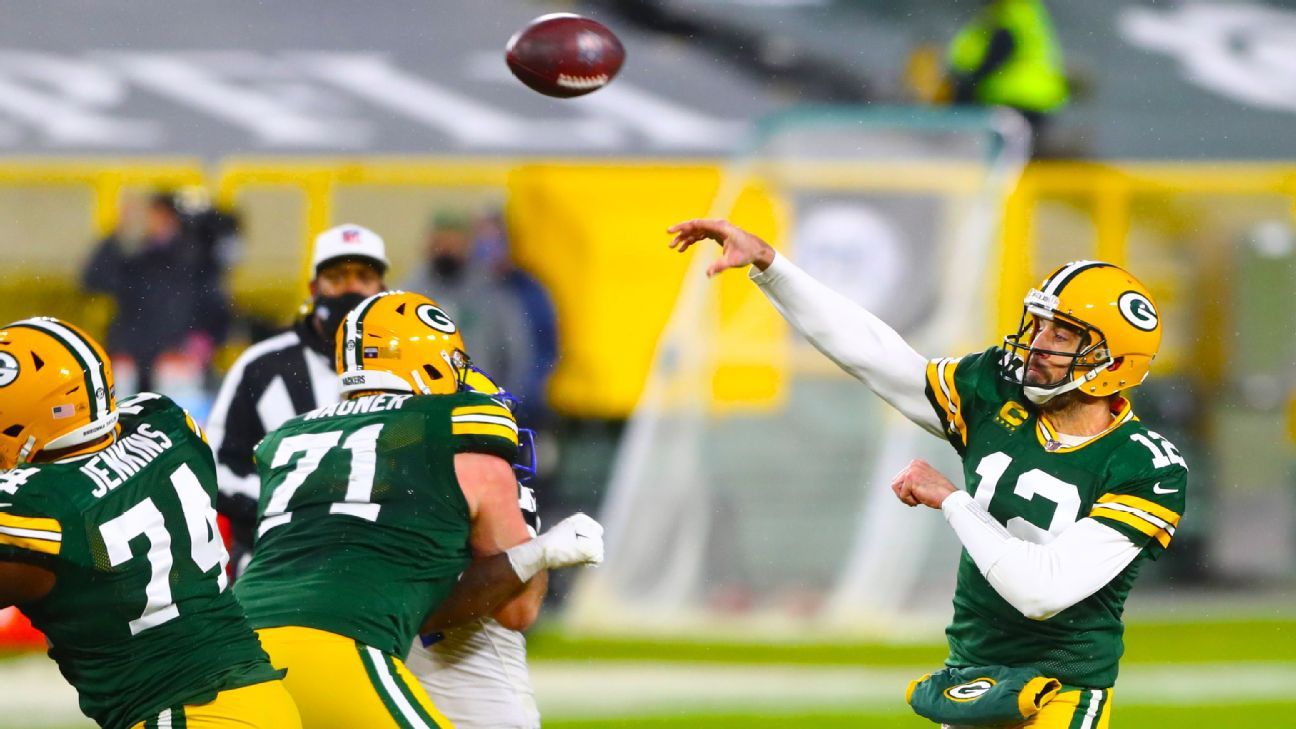 
GREEN BAY, Wis. — For all that Aaron Rodgers has accomplished in his Hall of Fame career, there’s one thing he has never done: played in an NFC Championship Game at Lambeau Field.

Come back next Sunday to see him check that off his list. Rodgers and the top-seeded Green Bay Packers (14-3) will play against either the New Orleans Saints or the Tampa Bay Buccaneers for a Super Bowl berth.

And the Pack will do so on their own turf thanks to their 32-18 win Saturday over the Los Angeles Rams at Lambeau, where fans — 8,456 of them — were allowed in for the first time all season.

Next Sunday will mark Rodgers’ fifth appearance in the conference title game. His previous four all came on the road. He won his first one — during the 2010 season, at Soldier Field — en route to his lone Super Bowl. He has lost three since, including last season at the San Francisco 49ers in blowout fashion.

It was after last season’s defeat when Rodgers repeated a familiar refrain, saying, “We’ve got to get one of these at home.”

Rodgers’ 190 career starts in the regular season are the most by any starting quarterback at the time of his first conference championship start at home, according to Elias Sports Bureau research. That distinction was previously held by Fran Tarkenton (187).

“It means a lot,” Rodgers said. “[Former Packers receiver] Jordy [Nelson] and I talked about it years ago. I had a lot of starts in this league without being able to be a part of hosting the NFC Championship.

“Hopefully, it’s a little colder than it was tonight. … It will be exciting to enjoy this tonight, to celebrate and then to watch the game tomorrow and to know that whoever wins is coming to our place.”

Rodgers made sure of that against the Rams (11-7), who had the NFL’s top scoring defense in the regular season (18.1 points per game). The Packers bettered that in the first half, with a 19-10 lead at the break. They became the first team this season to score on the Rams on each of its first three drives. It also was the fourth straight game the Packers’ top scoring offense has scored on each of its first three drives.

Rodgers threw a 1-yard touchdown pass to Davante Adams, sending Rams cornerback Jalen Ramsey into a heated post-play exchange with safety Nick Scott. Rodgers also ran for a touchdown in the first half, giving him a touchdown pass and a touchdown run in the same playoff game for the third time in his career. But it was his first postseason rushing score since that 2010 NFC title game at Chicago.

That was just the start.

When Aaron Jones ripped off a 60-yard run on the opening play of the third quarter to set up his own 1-yard touchdown run, it meant the Packers scored on each of their first five drives in a game for the first time since Week 3 of the 2016 season.

Saturday marked the 22nd time in NFL playoff history that the No. 1 scoring offense and No. 1 scoring defense faced each other. The Packers’ 32 points was the fourth-most in those matchups, according to ESPN Stats & Information research.

The Packers’ 484 yards, the second-most in their postseason history, was the most by any team in the playoffs against the No. 1 defense in the league since 1970, according to Elias Sports Bureau research.

“As you see, that’s a great team right there, when they’ve got to come into Lambeau — like I’ve said millions of times at this point — you come into Lambeau, you’re playing a different brand of football,” Adams said. “It takes you out of your element, as far as the way you talk, the way you play. You get rattled, man. It’s tougher to communicate. We got fans in there today, so they had it rocking. Everything was on our side, so it was just about coming out and playing Packer football. We do that and nobody can stop us.”

Rodgers kneeled the game away late to “MVP” chants from the crowd.

He completed 23 of 36 passes for 296 yards and two touchdown passes. His 58-yard touchdown pass to Allen Lazard in the fourth quarter was the longest scoring pass of his postseason career.

Rodgers benefited from the best rushing performance — 189 yards — his team has ever given him in a playoff game. The previous high was 147 yards in the 2011 divisional playoff against the New York Giants. But that was a loss in the only other time the Packers were the No. 1 seed under Rodgers.

That game denied him an NFC title game at home.

Ten years later, Rodgers would not be denied.