Mac Jones as Patriots’ QB of future? Decision at No. 15 could be telling – New England Patriots Blog 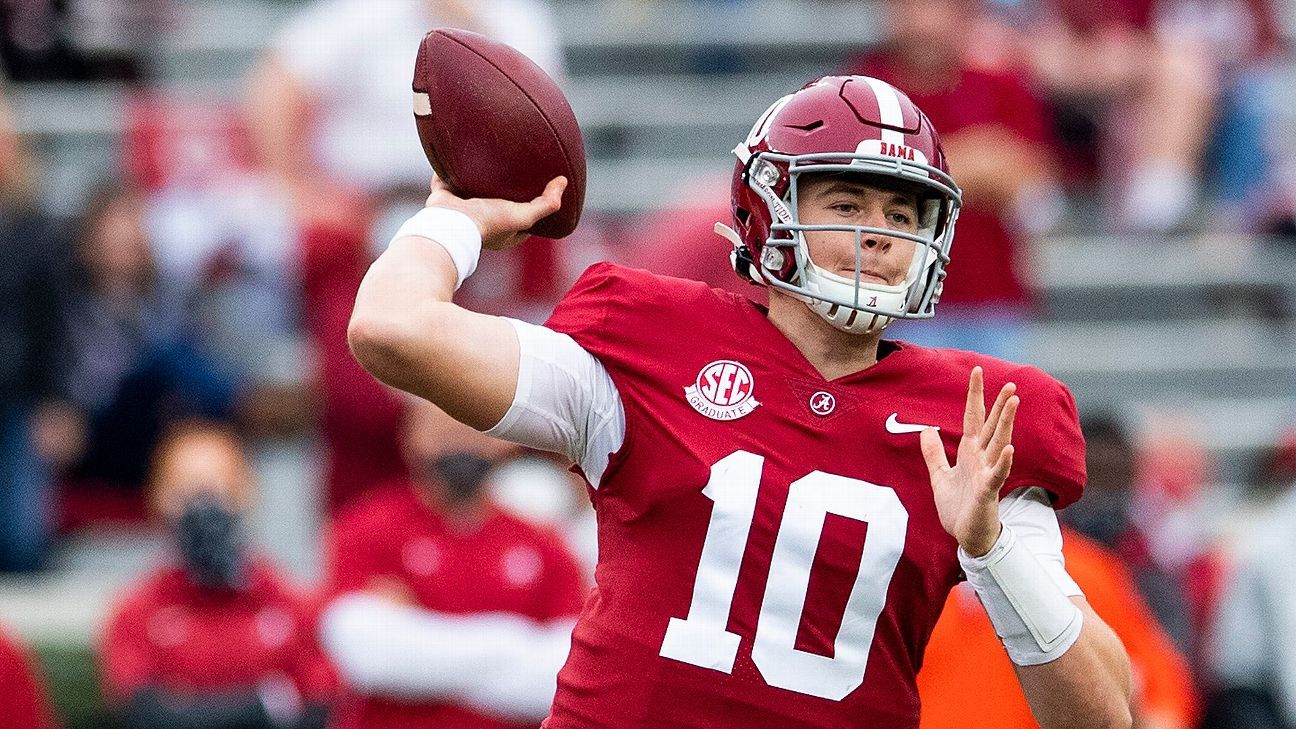 
FOXBOROUGH, Mass. — Quick-hit thoughts and notes around the New England Patriots and NFL:

1. Big Mac for Patriots?: When ESPN draft analyst Todd McShay released his first mock draft for the 2021 NFL draft last week, and slotted Ohio State quarterback Justin Fields to the Patriots at No. 15, he said on the First Draft podcast that the most common feedback was on that pick.

Many doubt Fields will be there, and McShay acknowledged as much (his mock didn’t include trades) while also sharing his opinion that Fields isn’t quite ready.

• Grading the hires: Why we like Smith in ATL »
• Latest buzz on coach openings »
• Jaguars’ Meyer must answer key questions »
• Why Saleh will be a home run for Jets »

A more likely scenario for the Patriots, and equally as compelling in some cases, is Alabama quarterback Mac Jones at No. 15 (or in a minor trade down). McShay described him as “super intelligent,” with “pocket presence” and someone who “feels things, anticipates, and gets the ball out.”

Those have traditionally been high on the Patriots’ list of “must-haves” when evaluating quarterbacks.

But what Jones (36-of-45 for 464 yards and five TDs in the national title game) offers in those areas is offset, in part, by his lack of mobility or a standout physical trait. As the NFL has transitioned to more quarterbacks who threaten defenses with their arm and legs, Jones is a throwback and more of a pure pocket passer. Ten years ago, Jones would have been a top-10 pick in McShay’s view. After a recent evaluation, McShay plans to have Jones in his top-20.

So how much do the Patriots value a dual threat in their next quarterback to keep up with where the NFL is headed?

That question will be answered by coach Bill Belichick, whose affinity for Nick Saban’s Alabama players is well documented. Offensive coordinator/quarterbacks coach Josh McDaniels will also have a major say.

Add it all up and a possible Jones-Patriots marriage is among the draft’s fascinating storylines.

2. Opt-outs in town: The Patriots asked the eight players who opted out of the 2020 season to return for year-end physicals last week. “I got to Boston on Sunday, did the physical and everything was perfect. As far as this year goes, I’m eager to get back,” relayed receiver Marqise Lee.

He said he has no regrets about opting out to protect his newborn daughter, Alia, and plans to learn more about NFL plans but seems to be trending toward playing in 2021. Among the others, running back Brandon Bolden has said he plans to play. My hunch is that safety Patrick Chung, tight end Matt LaCosse and fullback Danny Vitale make the same decision, while in my opinion, offensive tackle Marcus Cannon and linebacker Dont’a Hightower are less of a certainty to return.

3. Mayo’s time will come: The Eagles spoke with Patriots inside linebackers coach Jerod Mayo for their head-coaching vacancy on Friday, which is a testament to how quickly Mayo’s stock has risen since joining New England’s staff two years ago. It’s a bit early for Mayo, 34, but he has a rare ability to connect with people — and background in both football and business — to put him on the radar in future years as he gains more practical coaching experience. As for offensive coordinator Josh McDaniels, who is scheduled to interview with the Eagles on Sunday, he is probably closer to what Philadelphia needs in hopes of reviving quarterback Carson Wentz. A big question would seem to be how well he meshes with executive vice president Howie Roseman.

4. Ziegler’s return: Patriots assistant director of player personnel Dave Ziegler played his cards well, gaining invaluable experience in interviewing for the Broncos’ GM post, making a favorable impression, and then returning to New England with what is expected to be a multiyear contract and pay bump as Nick Caserio’s successor. Ziegler was probably a long shot to get the Denver job — they ended up hiring Minnesota’s George Paton — but I viewed his decision to withdraw his name from consideration as a reflection of the decisiveness that has earned him a measure of respect in the Patriots’ offices over the past eight years.

5. Cargile’s advancement: With the Lions hiring Rams director of college scouting Brad Holmes as their general manager (Holmes becomes the second Black GM in team history), the Rams are the first team to receive two third-round compensatory draft picks as part of the NFL’s new hiring initiatives. Closer to home, longtime Patriots pro scout Steve Cargile is one staffer who comes to mind who could follow a Holmes-type path, and might be in line for internal advancement following Caserio’s departure.

6. Belichick’s chase: Belichick turns 69 in April and some ask how much longer he plans to coach. The all-time chart for coaching wins — Don Shula (347), George Halas (324), Belichick (311) — seems like a good place to start. In other words, how many seasons would you estimate it takes Belichick to amass 37 wins to pass Shula? It’s why the idea of Belichick coaching a few years into his 70s, and perhaps longer, wouldn’t surprise me.

Todd McShay breaks down why he has Justin Fields being selected by the Patriots with the No. 15 pick in the 2021 NFL draft.

7. Weekly draft nugget: Penn State tight end Pat Freiermuth, who projects as an early-round pick, is a Massachusetts native (Merrimac) who wore No. 87 in college. That’s why some referred to him as “Gronk.” With the Patriots still looking to fill the void of Rob Gronkowski’s departure two years later, it would be a fun story if they turn to a prospect who admired Gronkowski as a youngster growing up about 70 miles from Gillette Stadium.

8. Kelly’s class: Over the majority of the past two decades, after the Patriots would usually pummel the Bills in Western New York, it was commonplace to see Pro Football Hall of Famer Jim Kelly waiting in the tunnel after the game for Tom Brady. Despite so many losing results, and his battle with cancer, Kelly was always the picture of class and perspective. As the Bills experience playoff success this year after such a long drought, I keep coming back to the vision of Kelly in those situations as one reason to feel good about it.

9. Harris gets away: The Saints’ presence in the playoffs has shined a spotlight on one of the great underdog stories in New England college football in recent years — receiver/returner Deonte Harris of Division II Assumption College in Worcester. Harris went undrafted mostly due to his size (5-foot-6, 170 pounds), and said only four or five teams had a private workout with him before the ’19 draft. The Saints were the most aggressive, more so than the hometown Patriots, and are reaping the rewards.

10. Did You Know: Devin McCourty, the Patriots’ nominee for the Walter Payton Man of the Year Award, has played the most defensive snaps (10,921) of any player since he entered the NFL in 2010. Malcolm Jenkins (Saints/Eagles) is next at 10,817.

Sergi Mingote: A Spanish mountain climber has died after falling from K2