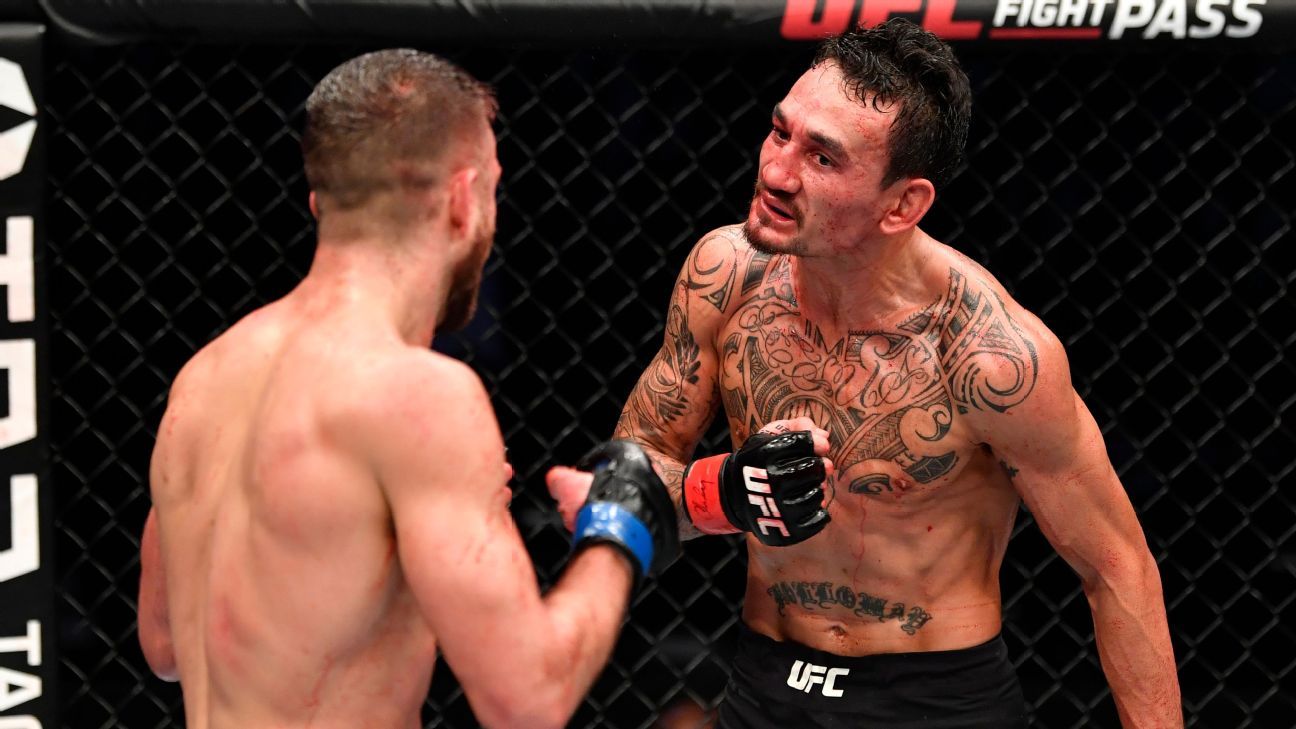 
With 90 seconds left in his fight Saturday, Max Holloway turned away from his opponent, Calvin Kattar, and told the broadcast team cageside that he is the best boxer in the UFC. On ABC, the network that has been a home for boxing since the 1940s, Holloway more than proved his point with his punches.

Holloway dominated Kattar via unanimous decision (50-43, 50-43, 50-42) at UFC Fight Night in Abu Dhabi, in one of the most one-sided main events in UFC history. Holloway is a former UFC featherweight champion and the most decorated 145-pound fighter of all time. The fight Saturday might have been the best performance of his career — one that could put him in line for another title opportunity.

UFC president Dana White said he believes Holloway “deserves” another shot at current welterweight champion Alexander Volkanovski, to whom Holloway has lost two close fights. But Holloway will have to wait: Volkanovski’s next fight will come against Brian Ortega on March 27 at UFC 260, sources told ESPN’s Ariel Helwani.

“To get my first title, I had to win 10 fights and an interim Max Holloway defeats Calvin Kattar in one-sided UFC main event,” Holloway said at his postfight news conference. “Hard work? I ain’t scared of no hard work. You know the saying: To be the best, you’ve gotta beat the best. And the best is ‘Blessed.’ Bring them all.”

ESPN had Holloway ranked No. 2 and Kattar at No. 6 in the world in the featherweight division coming in. The card was the first UFC event to air on ABC and the first since 2018 to air on network television.

Afterward, Holloway said he would be staying in Abu Dhabi for another week and will make himself available if anything happens to UFC 257 main event fighters Conor McGregor or Dustin Poirier. UFC president Dana White, however, quickly rejected that idea, telling reporters that Holloway would be going home to rest.

Still, White had nothing but praise for Holloway’s performance, calling him “one of the all-time greats, period, in fighting.”

“I think that people keep doubting Max and thinking, ‘Is old Max gonna show up? The guy who has lost a step and all this?'” White said. “He just doesn’t. A lot of people whom we all respect and know a lot about this sport picked Kattar to win tonight. Let’s give Kattar the respect he deserves, too. It takes two to make a great fight. Incredible.”

The scorecards were tied for the most lopsided in a five-round fight in UFC history, along with a bout between Rich Franklin and David Loiseau at UFC 58 in 2006. The 50-42 score was only the second ever in UFC history after Franklin vs. Loiseau.

Holloway has always been an exceptional striker. But he came out from the very first round with a different kind of ferocity. Kattar landed some nice jabs and hard right hands throughout. But for every one of those, Holloway returned volley with long, diverse combinations, targeting the head, the body, the legs and more. Holloway landed hard elbows and knees to the gut. The avid gamer was like a fighting video game character come to life.

“If you ain’t a Max Holloway fan, you’re a hater,” Kattar said. “Kid’s a beast. Did what he had to do. Good luck to him, and hopefully the champ next, because he deserves another shot.”

In his bout with Calvin Kattar, Max Holloway shattered the UFC records for:

Holloway’s 141 significant strikes landed in Round 4 were also the most in a single round in UFC history.

“He took everything — the kitchen sink, a fire truck, an ambulance. I threw everything at him,” Holloway said of Kattar. “I probably threw my mouthpiece at him at one point in there.”

The bout took place at Etihad Arena in front of capped amount of fans who had all gone through COVID-19 protocols. It was the first paid audience to witness a UFC event since last March.

The crowd was chanting for Holloway early because of his flurries. Kattar landed some nice combinations in the first round, but by the end of the round, Holloway’s pressure and versatile combinations to every part of the body were taking over. Holloway came close to finishing in the second with long combinations, but Kattar held strong despite being bloodied late in the round with an elbow. The only thing more impressive than Kattar’s toughness was Holloway’s stamina.

Holloway didn’t slow down at all in the late rounds. There were times when Kattar looked out on his feet against the cage with Holloway pouring combination after combination, but referee Herb Dean didn’t stop it. Late in the fifth, Holloway started taunting Kattar, dropping his hands and talking to the commentary booth in an astounding display of confidence.

“I was having the time of my life,” Holloway said. “I got to talk to [Cormier] a little bit in there, let him know I’m coming for his job. … Your guys’ jobs ain’t safe, either. I’m coming for it all. I want it all, baby.”

Holloway (22-6) dropped two in a row to Volkanovski before this bout. Both bouts were very close, and many thought Holloway won the second at UFC 251 in July. Holloway, 29, is the most accomplished featherweight in UFC history. He held some form of the 145-pound title in the UFC from 2016 to 2019. Holloway, a Hawaii native, has the most wins (17), the most KO/TKO wins (8) and the most stoppage victories (10) in UFC featherweight history.

Kattar (22-4) had won two in a row and four of his past five coming in. The Massachusetts native has four finishes in six UFC wins, known for his jab and booming right hand. Kattar, 32, was coming off a unanimous decision win over Dan Ige last July.